There are high rates of behavioral symptoms in breast cancer survivors, particularly those treated with chemotherapyAug 08, 2011

Acupuncture for improving a case of widespread herpes zoster after non-Hodgkin's lymphoma chemotherapy.Aug 12, 2021

Astragalus may provide an ideal complementary treatment to chemotherapy.Mar 01, 2008

Bi-weekly administration of paclitaxel and cisplatin in patients with advanced esophageal cancer results in amedian survival for all patients of 9 months.Mar 04, 2002

Cannabis extract is safe and efficacious in reducing chemotherapy-induced nauseau and vomiting.Nov 01, 2010

Chemotherapy does not appear to provide any benefit for metastatic cancer of the esophagus and gasto-esophageal junction.Jan 01, 2010

Chemotherapy used in advanced gastric or gastroesophageal adenocarcinoma results in an overall median survival time of between 7-9 months.Mar 20, 2010

Chemotherapy, but not a specific chemotherapy regimen, was associated with an increased risk of stroke.Apr 01, 2002

Effectiveness of yoga on quality of life of breast cancer patients undergoing chemotherapy.Jun 30, 2020

FOLFIRI and FOLFOX6 chemotherapies result in a median progression free survival time of between 7.7 and 8.4 months.Jul 01, 2010

In this study chemotherapy in patients with end stage cancer was associated with worse quality of life and the possibility is that the patients were harmed by the treatment.Jul 22, 2015

Infections after chemotherapy for acute leukemia continues to be common.Nov 30, 2015

Memory deficits occur in breast cancer patients who receive either chemotherapy or tamoxifen.Sep 01, 2011

Prognostic implications of hepatitis B virus infection in intrahepatic cholangiocarcinoma treated with first-line gemcitabine plus cisplatin.Oct 31, 2018

Reiki and companion groups reported improvements in quality of life and mood that were greater than those seen in the usual care group.Dec 31, 2014

Reiki given to cancer patients undergoing chemotherapy could be beneficial for improving symptoms and well-being.Apr 30, 2016

The median overall survival time for oxaliplatin, irinotecan and cetuximab treatment in advanced gastric cancer is survival was 38.1 weeks.Dec 01, 2011

The results of this study found that dental caries increased in children undergoing antineoplastic treatment.Jun 30, 2016

This study presents evidence of significant and progressive treatment-associated structural brain changes in patients with glioblastoma treated with chemoradiation.Aug 24, 2015

This study identifies profound disruption of the intestinal microbiome in terms of both taxonomic composition and metabolic capacity after chemotherapy.Jul 05, 2015

Chemotherapy inhibited tumor growth but promoted cachexia, this was attenuated by a combination of fish oil and selenium in this animal study.Apr 09, 2015

Endothelial cell changes occurring upon chemotherapy exposure in mice can create an environment favorable for metastasis formation through expression of VEGFR-1.Nov 14, 2011

Exposure to anticancer drugs results in mutation induction in the sperm of directly exposed male mice and can destabilize the genomes of their offspring.Feb 20, 2012

Pre-treatment with curcumin enhances oral bioavailability of docetaxel in rats.Oct 31, 2010

AHCC appears to be a safe adjuvant antitumor agent in combination with traditional chemotherapeutic agents not metabolized via the CYP450 2D6 liver enzyme pathway. Jun 01, 2008

Anticancer drugs may cause kidney disorders.Jan 01, 2001

Article provides evidence that both resveratrol and curcumin possess great potential both as chemopreventive agents and anticancer drugs.Jan 01, 2010

Curcumin works synergistically with paclitaxel to overcome multidrug resistance in tumor cells. May 01, 2009

Molecular replacement therapy with nutrients such as coenzyme Q10 and antioxidants may reverese mitochondrial dysfunction, fatigue and the adverse effects of chemotherapy of metastatic disease. Jan 01, 2008

Recurrence at secondary locations, often years after removal of the primary tumor, accounts for most of the mortality associated with solid tumors; most current anticancer regimens select for cells with mesenchymal and CSC properties. Dec 31, 2011

Survival of the fittest: cancer stem cells in therapeutic resistance and angiogenesis.Jun 10, 2008

The current study delineates the mechanism of chemotherapy-induced metastasis and provides novel therapeutic strategies to counterbalance pro-metastatic effects of chemo-drugs.May 18, 2015

The prevalence of chemotherapy-related cognitive impairment in cancer survivors ranges from 14 to 85 %.Aug 22, 2012

The results of the present study suggested that drug exposure may alter the aggressiveness and metastatic potential of cancer cells.Aug 31, 2015 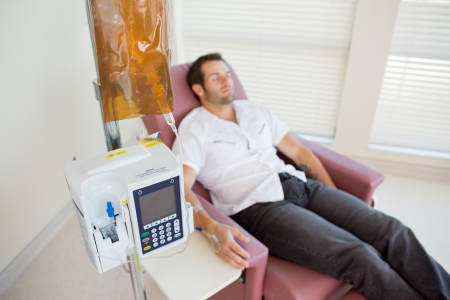 Effect of Your pH on the Development and Growth of Cancer
Written by Dr. Veronique Desaulniers
The human body's entire metabolic process depends on one critical factor - the pH of the plasma fluids. The pH scale is very simple. The lower the readings on the pH scale are acidic and the higher readings are more alkaline. Through homeostasis, the body maintains a healthy plasma pH of 7.4. Although the pH of the body will fluctuate with meals, exercise, stress, hormones and sleep, a healthy and balanced saliva pH should be between 7.0 to 7.5.

Healthiness and Healthicines
Written by Tracy Kolenchuk
There is a difference between someone who is unhealthy and someone who is sick. Part of that difference is the viewpoint, from which we look. When we look from a medical viewpoint - we tend to find illness. When we look from a healthicine view point - we are more able to see and understand healthiness and unhealthiness. Medicine is defined, by Wikipedia, as 'the science and art of healing'. The body heals.

Cancer as a Curable Metabolic Disease
Written by Dr. Jeffrey Dach, MD
Have we lost the war against cancer? With the failure of chemotherapy, is there another alternative to fighting cancer?

Research: Radiotherapy Causes Cancer, Blueberry Kills It
Written by Sayer Ji, Founder
Research confirms radiotherapy drives invasiveness within cancer, as well as the power of natural substances to strike to the heart of cancer malignancy.

Ginseng May Work Better Than Chemo and Radiation. Here's How...
Written by Sayer Ji, Founder
Known for thousands of years as a powerful tonic for health, new research reveals that ginseng and other cancer stem cell killing plants may provide highly effective treatments for cancer.

The Rise and Fall of Wikipedia
Written by Orthomolecular News Service
Ever venture into natural healing or alternative medicine on Wikipedia and find the answers become totally skewed in favor of corporate medicine?

Grape Seed Extract May Beat Chemo in Late-Stage Cancer
Written by Heidi Stevenson
The benefits of grape seed extract in cancer are well documented, but modern medicine won't do anything with it until the mechanism of action has been found, so that it can be isolated, purified, made poisonous and owned by a single company for enormous profits

Turmeric Extract Strikes to the Root Cause of Cancer Malignancy
Written by Sayer Ji, Founder
A turmeric study published in Cancer Letters is paving the way for a revolution in the way that we both understand and treat cancer

Antineoplastons for Cancer: Ignored for 45 Years?
Written by Sayer Ji, Founder
Could a potential treatment for advanced, chemotherapy and radiation resistant cancer have already been discovered as far back as 1967? Could this natural substance have been so close to us for all this time, as to be part of our own blood and a constituent of our own urine?

Traditional Food Puts Chemotherapy to Shame, Study Reveals
Written by Sayer Ji, Founder
A traditional food plant that has been used for thousands of years to improve health and well-being, is finally being validated by science. The results? It may be far superior to a chemotherapy agent with deadly side effects and dubious efficacy

The Coming Revolution in Medicine
Written by Capt. Randall
Everyone talks about inflammation, but what is it really?

Are Cancer Stem Cells the Key to Discovering a Cure?
Written by Sayer Ji, Founder
A root cause and potential cure for cancer is largely ignored by many conventional oncologists despite an accumulating body of research that we may already have the answer.

Is Mandatory Pediatric Chemo Institutionalized Child Abuse?
Written by Sayer Ji, Founder
A disturbing trend has taken root in America. Mandating chemotherapy in children is equivalent to requiring parents to let others poison their children with chemicals that are themselves classified as carcinogenic. If a parent has not the authority to decide how or what their own child is treated, is the State or are medical institutions essentially laying claim to owning that child's body?

If Cannabis Can Kill 'Incurable' Brain Cancer, Why Is it Criminalized?
Written by Sayer Ji, Founder
Cannabis contains a compound that may kill brain cancers that chemotherapy and radiation can't touch, so why isn't it being used today?

The Cannabis Solution For Cancer
Written by Dr. Mark Sircus
This quick overview of the science backs up the assertion that every cancer patient and every oncologist should put medical marijuana on their treatment maps

New Study Delivers Another Black Eye for Chemotherapy
Written by Jefferey Jaxen
What if chemotherapy actually helped to spread cancer? Many within the medical and research communities are becoming emboldened to speak out against outdated and failed healing modalities still in use today.

Antioxidants & Chemotherapy: the Cruelest Lie Ever Told
Written by Linda Woolven & Ted Snider
Cancer patients are suffering from devastating side effects of chemotherapy, when antioxidants may be the answer