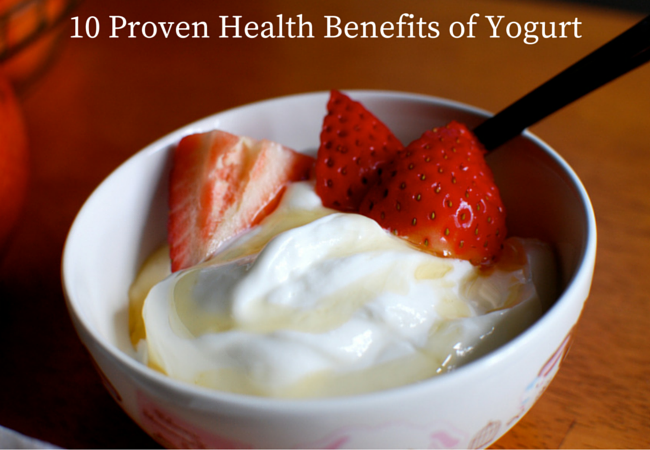 Probiotics occur naturally in many foods. The most popular source in the Western diet is yogurt. Here are 10 proven ways yogurt can boost your health.

The human gut contains several thousand strains of bacteria and every person has a different mix.  Some are beneficial, some are just there for the ride, and some can become problematic. When the balance between "good" and "not so good" bacteria is disrupted, lots of things can go wrong from the immune system, to digestion, to mental health.

Antibiotics, stress, excess alcohol, chlorine and other toxins can destroy good bugs and allow bad ones to thrive.  To re-balance the microbiome of your gut, you need to repopulate with good bacteria or probiotics.

Probiotics occur naturally in many foods. The most popular source in the Western diet is yogurt. While dairy products are not right for everyone, fermented diary products appears to significantly reduce their potential allergenicity and also confer significant health benefits. Also, consider that goat milk based yogurt may provide an excellent alternative to cow's milk formulas, as its nutritional composition better matches that of human milk, which could be considered the ideal standard for compatibility.

Here are 10 proven ways yogurt can boost your health.

A large study from the City University of New York found that men and women who ate about two cups of yogurt or fermented milk per day reduced their mortality rates compared to those who ate little or none. They also had reduced death rates from heart disease and cancer.

And a Swedish study followed 60,000 women for 20 years.  It found that for each serving of fermented milk (yogurt, kefir, or sour cream) women ate in a day, their risk of hip fracture dropped by 10 to 15 percent.[i]

A  from the Harvard School of Public Health found that people who eat yogurt every day have a lower risk of developing Type 2 diabetes.

The researchers pooled the results of three prospective cohort studies that followed the medical history and lifestyle habits of health professionals. They found that eating just one 28 gram (one ounce) serving of yogurt per day was linked to an 18 per cent lower risk of type 2 diabetes.[ii]

A study from the American Heart Association (funded by the NIH and Dannon Company, Inc.) showed that adding more yogurt to your diet without increasing overall calories may help lower risk of developing high blood pressure.

Over 15 years researchers followed more than 2,000 people who had normal blood pressure at the start of the trial.  They found that people were 31 percent less likely to develop high blood pressure if at least two percent of their calories came from yogurt.  That would be equivalent to eating one six-ounce container of yogurt every three days.[iii]

In 2014 a meta-analysis in the American Journal of Clinical Nutrition found that people who regularly eat yogurt may gain less weight over time.[iv]

The researchers noted one study of 34 obese individuals on a calorie restricted diet.  Half were randomly assigned to eat six ounces of yogurt three times a day.  The yogurt group had a 33 percent greater reduction in body weight, a 60 percent greater loss of body fat, and a 31 percent reduction in the loss of lean body mass compared to the control group.[v]

And a Harvard study in the New England Journal of Medicine found that weight gain over a four-year period was on average .82 pounds less with each additional cup of yogurt eaten per day.

In a 28-day study of women with constipation, Argentina researchers found that eating yogurt twice a day increased bowel movements and resulted in less straining and pain.

And a Brazil study of 154 infants between one and 30 months with persistent diarrhea found that a yogurt-based formula resulted in a significant reduction in stool output and a shorter duration of diarrhea.

In two separate studies, healthy elderly individuals were divided into two groups.  One group ate 90 grams of yogurt a day and the other drank 100 ml of milk for eight or 12 weeks.  The risk of catching the common cold was about 2.6 times lower in the yogurt group than in the milk group.  In addition, the yogurt group boosted their natural killer cell activity significantly more than the milk group.

10.  Protect against environmental toxins with yogurt.

Lake Victoria in Tanzania is known to be polluted with pesticides and toxic metals including mercury. Researchers produced a new type of yogurt containing Lactobacillus rhamnosus bacteria.  They distributed the yogurt to a group of pregnant women.

Results showed a significant protective effect of the probiotic against mercury and arsenic in the pregnant women.[vi]

What To Look For In Yogurt

When buying yogurt, look for "live, active cultures" on the label, and also organic versions.

Unfortunately, most commercial yogurt products are junk food.  They contain high amounts of added sugars, flavorings, preservatives, and thickeners.  The ingredients should say milk and bacteria – that's it.

Or try making yogurt at home. It's a simple process of heating milk, cooling it, adding cultures (or some yogurt), and letting it culture in a warm place overnight.  Recipes are easily available on the internet.