Views 33047
Posted on:
Wednesday, March 8th 2017 at 6:00 am
Written By:
Margie King, Health Coach
This article is copyrighted by GreenMedInfo LLC, 2019
Visit our Re-post guidelines

Walnuts benefit your heart, brain, bones and more. Here's why you need to eat more of them

Researchers from the University of California Davis say the U.S. government is wrong when it comes to demonizing high fat foods. In fact, one study shows eating high fat whole walnuts or walnut oil can slow prostate cancer growth.

The researchers wanted to know what it is about walnuts that give them the prostate cancer powers observed in earlier studies.

In their study published online in the Journal of Medicinal Food, the researchers fed animals either whole walnuts, walnut oil, or an oil mixture with the same fatty acid content as walnut oil.[i]

After 18 weeks the walnuts and the walnut oil slowed prostate cancer growth. They also reduced cholesterol and increased insulin sensitivity. And they reduced levels of the hormone IGF-1 which has been linked to both breast and prostate cancer.

The walnut-like oil did not have the same benefits. In other words, it isn't the omega-3 fats in walnuts that have the anti-cancer effects. It's something else but the scientists couldn't pinpoint what it is. They ruled out fiber, zinc, magnesium, and selenium.

And they noted that as with many foods, the health benefits cannot be broken down to one compound. It's multiple components that nature combined into one natural food that produces health benefits. That's why whole foods are more than the sum of their parts.

Here are 12 more proven reasons to add a few walnuts to your daily routine:

The PREDIMED human study, which assessed the Mediterranean diet, found that eating walnuts reduced cancer mortality. And a study of 118,000 people by the Harvard School of Public Health found people who ate a handful of nuts every day were 20% less likely to die from any cause over a 30-year period.

In a University of Wisconsin study 36 people ate 30 grams of English walnuts per day for 30 days. Their blood lipid profiles and endothelial function improved and they didn't gain weight.[ii] Black walnuts didn't have the same effect. To learn more about the difference between English and black walnuts watch this video.

Other studies show that adding walnuts can significantly decrease total and LDL cholesterol. In an Iranian study, 52 volunteers were divided into 2 groups. One group ate 20 grams of walnuts per day and the other group ate none. After eight weeks, the walnut group lowered their triglyceride levels by 17.1% and increased their HDL (good) cholesterol by 9%.[iii]

In a Harvard Medical School study 20 men and women with metabolic syndrome participated in a randomized, double-blind, crossover study of walnut consumption. Everyone was fed a diet of the same number of calories. But for breakfast subjects consumed a shake containing either walnuts or a placebo. After just three days, those drinking the walnut shake reported feeling more satisfied and less hungry.

In another study from UC Davis, 31 patients with polycystic ovary syndrome (PCOS) randomly received either walnuts or almonds containing 31 grams of total fat per day for 6 weeks. PCOS is commonly associated with insulin resistance, dyslipidemia and increased inflammation. The walnuts decreased LDL cholesterol by 6%.They also increased insulin response and sex hormone-binding globulin.[iv]

Australian researchers studied 50 overweight adult diabetics in a one year program where participants received low-fat dietary advice. But half the subjects also ate 30 grams of walnuts per day. In the first three months the walnut group significantly lowered their fasting insulin levels.[v]

Researchers from UCLA studied 117 young men who ate a typical American diet.[vi] They gave 59 of the men 75 grams of walnuts per day while the others avoided tree nuts. After 12 weeks those who ate walnuts significantly improved sperm vitality, motility and quality.

In a crossover study researchers assigned 64 college students to eat walnuts or a placebo. After eight weeks they found that walnut eaters had increased their inferential verbal reasoning abilities by 11.2%.[vii] Other studies show that greater intake of high-antioxidant foods such as walnuts may increase "health span" and enhance cognitive and motor function in aging.[viii]

10. Walnuts Are Number One in Antioxidants

Walnuts have almost twice as many healthful antioxidants as any other nut. They also have the highest quality and most potent antioxidants. One study measured the antioxidants in walnuts as 2 to 15 times more potent than vitamin E.[xi]

Greek researchers found that walnut extract has a remarkable bone-building activity at the cellular level. They credit ellagic acid, one of the major polyphenols in walnuts, for the bone benefits.[xii]

According to researchers at Penn State University, a diet rich in walnuts may prepare the body to deal better with stress. In a study of 22 healthy adults with elevated LDL cholesterol participants were subjected to stress either by giving a speech or immersing a foot in cold water. The results showed that when participants were following a diet that included walnuts and walnut oil, their blood pressure and stress responses were lower.

Unfortunately the standard American diet includes no nuts at all on a daily basis. But just a quarter cup of walnuts provides more than 100% of the daily recommended value of omega-3 fats, along with high amounts of copper, manganese, molybdenum, and biotin.

Look for walnuts that are marked organic and raw. Otherwise they may be irradiated and pasteurized.

The papery covering of a shelled walnut is very bitter and most people don't like it. But up to 90% of the walnut antioxidants are in that flaky cover so it's worth eating.

Once out of the shells, walnuts can become rancid. Store them in an airtight container in your refrigerator or freezer. And don't leave them there too long. Throw them on salads or in smoothies and yogurt. And of course bake them into brownies, cookies, cakes and breads. 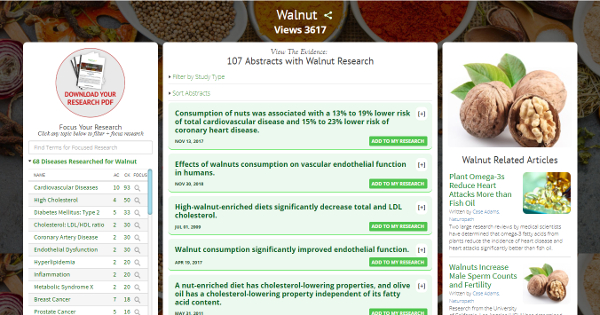