6 Proven Reasons to Eat the OTHER Black Berry

Views 27818
Posted on:
Wednesday, October 30th 2019 at 4:00 am
Written By:
GreenMedInfo Research Group
This article is copyrighted by GreenMedInfo LLC, 2019
Visit our Re-post guidelines

Chances are you can find fresh blackberries pretty easily in your local market. But black raspberries (Rubus occidentalis) are a different story. And they are worth seeking out

They are also extremely high in anthocyanins, the antioxidant compounds that give purple foods their rich, unique color. And they are rich in ellagic acid, a powerful anti-cancer, anti-viral, and anti-bacterial compound.

In a minute you'll see how to tell a black raspberry from a blackberry in your market. But first here are six amazing and proven benefits of black raspberries.

Laboratory studies show black raspberries inhibit a broad range of cancers. A pilot study was conducted in twenty Barrett's esophagus patients. Barrett's esophagus is common in people who suffer with gastroesophageal reflux disease and is associated with an increased risk of esophageal cancer.

Animal studies have suggested that black raspberries may inhibit the growth of oral cancers. Researchers from Ohio State University conducted a study to test the theory in patients with biopsy-confirmed oral squamous cell carcinomas.

They gave 30 patients oral troches containing freeze-dried black raspberry powder. After about two weeks the researchers confirmed that the phytochemicals from the black raspberries were detected in the cancer tissues. In addition, black raspberry significantly reduced adverse gene expression of the oral cancers. They suggested that black raspberry may be effective for oral cancer chemoprevention.

Black raspberry is known to improve vascular endothelial function in patients at a high risk for cardiovascular (CV) disease. Just this year in a study from South Korea, researchers tested the short-term effects of black raspberry extract on endothelial progenitor cells (EPCs) and arterial stiffness in patients with metabolic syndrome. EPCs are derived from bone-marrow. They circulate in the blood and contribute to the formation of new blood vessels. They also help with the repair and maintenance of your vascular system.

Researchers randomized 51 patients into either a black raspberry group or a placebo group. They found that after 12 weeks the use of black raspberry significantly increased circulating EPCs, lowering cardiovascular risk in patients with metabolic syndrome.

In laboratory studies black raspberries have been shown to have beneficial effect on glucose (sugar) and lipid (fat) levels. In another study from South Korea researchers looked at the effects of black raspberry extract on pre-diabetic patients.

Diets rich in fruits and vegetables have been reported to be inversely associated with colorectal cancer risk. And in a lab, black raspberry has been shown to have antiproliferative effects on colon cancer cells.

How To Tell You're Getting Real Black Raspberries

It takes a little practice to recognize a real black raspberry from a more common blackberry.

Both berries come from the same genus and family so the resemblance is strong. But in general the black raspberry looks very much like a red raspberry only black. They have a hollow core and aren't really shiny.

Blackberries on the other hand are generally much larger and have an elongated shape. They also have a very shiny skin.

The taste is different too. Blackberries can be tart while black raspberries are more fruity.

Black raspberries are native to North America but the season is very short - typically just the first three weeks of July. The rest of the year you can find frozen or freeze-dried berries, as well as black raspberry jams. 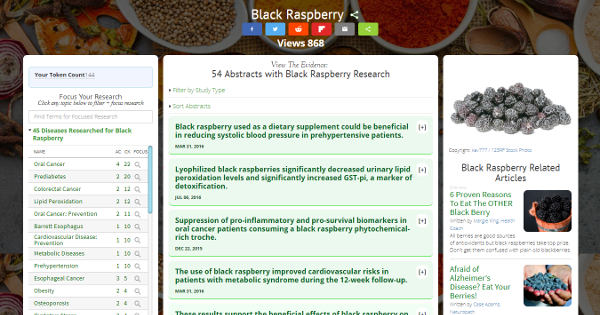