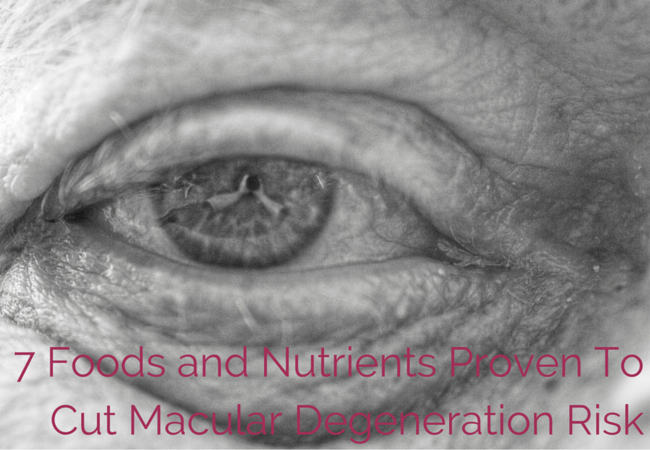 As the baby-boomers age, blindness from age-related macular degeneration is on the rise. More than 3 million more people will become victims in the next five years. Eating right can lower your risk

Age-related macular degeneration (AMD) is the leading cause of vision loss among people 50 and older. It affects more than 1.75 million people in the U.S. and is expected to strike as many as 3 million in the next five years.

The macula is the small spot near the center of the retina. The eye needs it for central vision to see objects straight ahead. When the macula becomes damaged, it severely limits your ability to see things in your central line of vision.

As AMD progresses, a blurred area develops near the center of your vision. Objects may not appear as sharp or bright as they used to. Colors seem faded. That loss of central vision can interfere with daily activities like recognizing faces, reading, driving, working, cooking, or watching TV.

Besides age, the biggest risk factor for AMD is smoking. Other risk factors include sun exposure, high blood pressure and obesity.

The first AREDS study showed that a combination of vitamin C, vitamin E, beta-carotene, zinc, and copper reduce the risk of late-stage AMD by 25%.

The AREDS2 study found that a combination of the carotenoids lutein and zeaxanthin in place of beta-carotene was just as effective. [ii] Carotenoids were also believed to be safer than beta-carotene for smokers at higher risk of lung cancer.

The AREDS2 nutrient combination is widely available in supplement form. But in addition to those nutrients studies show other foods and compounds are effective to reduce the risk and progression of AMD and improve vision.

Multiple studies show that supplementing with carotenoids and antioxidants improves AMD. In one randomized, double-blind placebo controlled study from a Veterans Administration Hospital 90 patients were assigned to receive 10 mg of lutein alone, or 10 mg of lutein plus a combination of antioxidants, vitamins, and minerals, or a placebo. After 12 months they found that either alone or in combination with other nutrients, lutein improved visual function.

But it's not just supplements. Eating more foods high in lutein and zeaxanthin reduces AMD risk. In a prospective cohort study published in JAMA, Harvard researchers followed more than 100,000 people from the Nurses' Health Study and the Health Professionals Follow-up Study in the United States. Based on diet reports the researchers found that those eating the most foods containing lutein and zeaxanthin had a 40 percent reduction in AMD risk compared to those eating the least. Other carotenoids including beta-cryptoxanthin, alpha-carotene, and beta-carotene, were linked with a 25 to 35 percent lower risk.

Here are seven foods and nutrients proven to support eye health and reduce your risk of AMD.

In an Australian study of 6,734 people aged 58 to 69 years, researchers collected dietary information over five years. Ten years later they measured the participants' macula for signs of early or late AMD. They found that eating 100 ml of olive oil every week cut AMD rates by 52 percent compared to lower olive oil intakes. That's just about seven tablespoons, or less than a half cup of olive oil a week.

Swiss researchers found that goji berries may reduce the risk of AMD. They conducted a double blind, randomized, placebo-controlled study of 150 people aged 65 to 70 years. Half the subjects received 13.7 grams per day of a milk-based formulation containing goji berry - also called wolfberry - or a placebo for 90 days. Goji berries are high in antioxidants and zeaxanthin.

The subjects were tested for blood levels of zeaxanthin and antioxidants. They were also examined for the appearance of drusen in the macula. Drusen are yellow deposits under the retina. They are made up of lipids, a fatty protein, and their presence indicates an increased risk of AMD. In the study, drusen increased in the placebo group but remained stable in the goji berry group.

In addition, zeaxanthin blood levels increased by 26 percent in the goji group and antioxidant capacity increased 57 percent. Those measures did not change in the placebo group.

A study from Sanford-Burnham Medical Research Institute found rosemary may protect against macular degeneration. Researchers discovered that carnosic acid, a component of rosemary, protects your retina from degeneration and toxicity. They treated retinal cells with carnosic acid found in rosemary and found it triggered the production of antioxidant enzymes in the cells. That in turn lowered cell-damaging free radicals. They also tested carnosic acid in animals, finding that mice treated with it suffered less vision damage when exposed to light.

Australian and Italian researchers proved the Mediterranean spice saffron helps slow progression of AMD and improve vision. They conducted a randomized, double-blind, placebo-controlled study of people with early stage AMD. One group in the study supplemented with 20 mg per day of saffron. After just 90 days the researchers saw significant improvement in the saffron group.[iii]

The researchers noted that saffron from the crocus flower contains chemical compounds called crocin and crocetin. These are antioxidant derivatives of carotenoids. Crocin protects photoreceptors from light-induced death. Crocetin increases the availability of oxygen to the cells.

French researchers tested ginkgo biloba against a placebo on 10 out-patients with senile macular degeneration. In spite of the small group, the researchers concluded that ginkgo biloba extract led to a statistically significant improvement in long distance visual acuity.

A Harvard study found that daily supplementation with B vitamins may reduce the risk of AMD. Researchers conducted a randomized, double-blind, placebo-controlled trial of 5,442 female health care professionals 40 years or older. Participants were randomly assigned to receive a daily combination of 2.5 mg of folic acid (vitamin B9), 50 mg of pyridoxine hydrochloride (vitamin B6), and 1 mg of cyanocobalamin (vitamin B12), or placebo. After an average of 7.3 years of treatment and follow-up, the vitamin B group had a 34 percent lower risk of AMD. For visually significant AMD the risk dropped 41 percent. The researchers indicated that B vitamins may reduce high homocysteine levels which have been linked to AMD.

Studies show that egg yolks have the highest percentage levels of lutein and zeaxanthin.[v] Other sources containing both of these carotenoids are corn and honeydew melon, as well as dark leafy greens such as kale, turnip greens, collard greens, and romaine lettuce.

Other foods high in zeaxanthin include orange peppers, oranges, and mango.