Views 30387
Posted on:
Wednesday, April 8th 2020 at 7:15 pm
Written By:
GMI Reporter
This article is copyrighted by GreenMedInfo LLC, 2020
Visit our Re-post guidelines 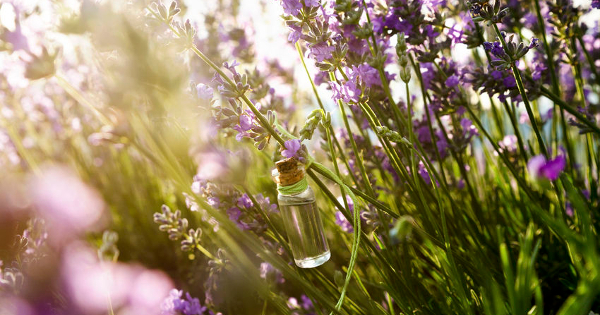 Lavender has been used for medicinal purposes for over 2,500 years. Today lavender is the most popular essential oil in the world. Here are just 7 proven uses for this amazing oil

Lavender (Lavandula angustifolia) has been used for medicinal purposes for over 2,500 years especially in Traditional Chinese Medicine.

Ancient Persians, Greeks, and Romans added lavender flowers to their bathwater. The name itself comes from the Latin “lavare” meaning to wash. The Egyptians used lavender as a perfume, as well as for mummification.

Today lavender is the most popular essential oil in the world. Compounds contained in the oil have antifungal, antimicrobial, and antibiotic effects.

Scientific studies back up the wisdom of the ancients. Here are just 7 evidence-based uses for lavender essential oil:

A German study confirmed that lavender oil is more effective than placebo in relieving anxiety in elderly patients. The researchers concluded that it would be an effective and well-tolerated alternative to synthetic drugs.

In another study of 90 anxious patients awaiting open-heart surgery, researchers had the patients inhale either lavender oil or distilled water for 20 minutes. Inhaling lavender reduced anxiety as well as cortisol levels. Questionnaires answered by the patients showed the lavender decreased anxiety by 10.8 percent. Blood testing revealed that cortisol levels dropped by a whopping 69.6 percent.

And in a study of 60 heart patients in a coronary intensive care unit (ICU) patients were given 2% lavender essential oil via inhalation every day. After 15 days, the patients inhaling lavender reported significantly less anxiety. Researchers concluded that lavender is a non-invasive, cheap, easily applied, and cost effective intervention for cardiac patients in the ICU.

Several studies show the effectiveness of lavender aromatherapy in sleep-related disorders. In one study of 158 new mothers, women were assigned to two random groups. One group dropped lavender oil on a cotton ball and inhaled 10 deep breaths before going to sleep. They also kept the lavender ball near their pillow until morning. They did this four times a week. A control group did the same thing with a placebo oil rather than lavender. After eight weeks, women inhaling lavender had a significant improvement in their sleep quality compared to the control group.

It is estimated that 45 percent of women suffer from moderate to severe dysmenorrhea. This condition develops at the time of menstruation and can cause cramps, nausea, vomiting, fatigue, loss of appetite, diarrhea, and headaches.

A lavender oil massage can help relieve dysmenorrhea. In one study from Turkey, 44 midwifery or nursing students administered a self-massage with either lavender oil or petroleum oil as a placebo. The lavender oil was found to reduce menstrual pain at a statistically significant rate.

In an Iranian study of 80 midwifery and nursing students, volunteers were randomly assigned to receive either a lavender oil massage or placebo massage during two consecutive menstrual cycles. Their level of pain was measured before and 30 minutes after the massage. The lavender oil massage caused a significant decrease in dysmenorrhea symptoms compared to the placebo.

The researchers noted that topical application of lavender oil relaxes the muscles, improves blood supply to the tissues, and increases elasticity. And the active compounds in lavender oil remain on the skin for about 90 minutes after the massage. In addition, the oil - after topical use or inhalation - is absorbed into the blood stream.

In addition to pain many women suffer with emotional stress during their menstrual periods. A Japanese study found that inhaling lavender can help. Researchers studied 17 women in their early 20s with mild to moderate premenstrual symptoms. The women inhaled either lavender or water. They found that inhaling lavender for just 10 minutes significantly increased the activity of the parasympathetic nervous system compared to the water. In addition, psychological tests showed that lavender significantly decreased feelings of depression/dejection and confusion as long as 35 minutes after inhalation.

Lavender is proven to relieve pain. In one study 106 patients undergoing peripheral venous cannulation (PVC) were divided into two groups. PVC is a procedure in which a tube is placed inside a vein to draw blood or administer fluids, medications, nutrition, chemotherapy, or blood products. One group of patients received lavender aromatherapy and the other received sham aromatherapy. After the PVC procedure, the pain scores of the lavender group were significantly lower than the placebo group. In addition, patient satisfaction was significantly higher in the lavender group.

Kidney dialysis is another painful procedure that can cause patient anxiety during the insertion of dialysis needles. In a study from Iran, 34 hemodialysis patients were divided into three groups. The first group received topical lavender essential oil during the insertion of their arterial needles for dialysis. The second group received no intervention and the third group received a water placebo. Pain intensity dropped 37 percent for the lavender group compared to the no intervention group, and dropped 31 percent compared to the placebo group.

And in a recent study in the Journal of Alternative Complementary Medicine 100 patients aged 19-64 years with kidney stones were divided into two groups. One group received the standard treatment of 75 mg of diclofenac sodium, a non-steroidal anti-inflammatory drug. The second group received lavender aromatherapy in addition to the diclofenac. Pain measured 30 minutes after the treatments was significantly lower in the group using lavender aromatherapy.

In addition to relieving anxiety and pain, lavender oil can help reduce physiological signs of stress. In a study of 20 healthy volunteers Thai researchers compared lavender to sweet almond oil. They measured the subjects' blood pressure, heart rate, respiratory rate, and skin temperature to determine the level of stress in the autonomic nervous system. In addition, subjects were asked to estimate their mood responses such as feeling pleasant or unpleasant, uncomfortable, sensual, relaxed, or refreshed.

About 75 percent of women experience a vaginal candidiasis infection at least once in their lifetime. The culprit in 85 to 90 percent of these cases is the Candida albicans fungus. Conventional medicine uses the drug clotrimazole to treat vaginal infections. It has side effects like increased liver enzymes, painful urination, and depression.

In a recent study researchers compared lavender essential oil with clotrimazole on the C. albicans fungus in the lab. After 48 hours the fungal cell count was lower for lavender than for clotrimazole.

Lavender oil has been shown to help heal mouth ulcers. In a study of 115 patients with recurrent aphthous ulcers, subjects were treated with lavender oil or placebo. The lavender group had a significant reduction in inflammation and ulcer size. In addition, the healing time was faster by two to four days in the lavender group. And pain relief was noted from the first dose of lavender.

When buying lavender essential oil look for an organic, therapeutic grade product. Use it topically on the skin, full-strength or mixed with a carrier oil such as sesame or coconut oil.

You can also rub two or three drops of lavender essential oil in your palms and then inhale the oil. Or add a couple of drops to your washing machine. You can also add four to six drops to a spray bottle with about a cup of water. Mist your skin or room.

To learn more about natural, healing substances like Lavender Essential Oil, use the GreenMedInfo.com Research Dashboard: 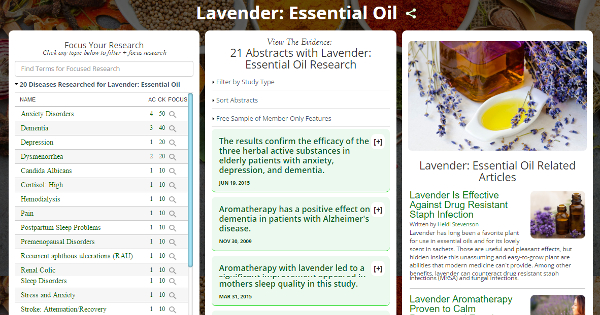