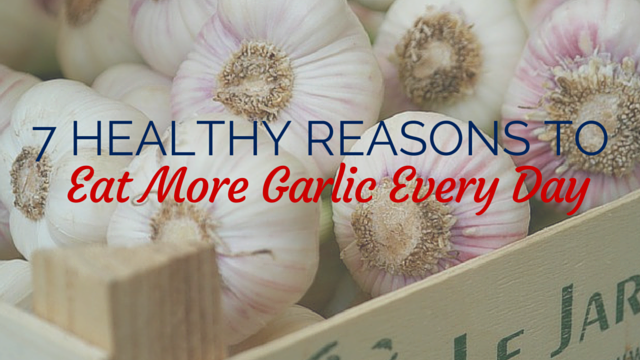 Whether you love garlic or can't stand the stink, there is no denying that this bulb provides a treasure trove of healthy benefits.

Garlic (Allium sativum) has been called the "stinking rose."  While some people think it reeks, others can't get enough of its bite.  Whether you love garlic or can't stand it, there is no denying that this bulb provides a wealth of healthy benefits.

Green Med Info's database documents the effectiveness of garlic in 183 disease conditions ranging from cancer to stroke, infection to atherosclerosis, diabetes to lead toxicity. The database also provides evidence of garlic's 57 pharmacological effects in the body.

1. Garlic Cuts Risk of Heart Attack and Stroke by 50%

Garlic reduces a multitude of risk factors that may lead to heart attack or stroke.  It's been shown to affect arteriosclerosis, triglycerides, blood pressure, platelet aggregation, and plasma viscosity.  Penn State researchers noted that studies link garlic use with a 38% decreased risk of heart problems in general.[i]

And in a prospective four-year clinical trial in Germany, researchers found that because garlic has so many effects on the body, it resulted in a reduction of relative cardiovascular risk for infarction (heart attack) and stroke by more than 50%.[ii]

Studies show garlic inhibits the formation of arteriosclerotic plaque.[iii]  In fact, research on GreenMedInfo.com features 14 studies on how garlic fights arteriosclerosis, calcification of the arteries, and arterial plaque.

At UCLA researchers conducted a placebo-controlled, double-blind, randomized trial of 65 people at risk for heart disease.  Every day they gave the subjects a placebo capsule or a capsule containing aged garlic extract (250 mg) plus Vitamin B12 (100 micrograms), folic acid (300 micrograms), Vitamin B6 (12.5 mg), and the amino acid l-arginine (100 mg).  They measured the amount of calcification in the coronary artery at the beginning of the trial and at the end.  After one year the progression of coronary artery calcification was significantly reduced for the group taking the garlic and other supplements.[iv]

And the 4-year clinical trial in Germany cited above showed that garlic powder taken daily reduced the volume of arteriosclerotic plaque by up to 18%.[v]

3. Garlic Protects the Heart from Calcification

A study published in the International Journal Cardiology shows that aged garlic extract helps alter the ratio of brown fat to white fat surrounding the heart muscle.  Brown fat is a more active form of adipose tissue and produces heat or energy.  White fat is for storage and is inactive.  White fat surrounding the heart muscle is strongly correlated with the calcification of the coronary artery.

After one year the risks of coronary artery calcium progression were significantly lower in the supplement group compared to the placebo group.  Researchers also found an increase in the beneficial brown fat around the heart muscle. And the more brown fat a person had around their heart, the less risk of calcification they had.

"garlic may prove useful for patients who are at high risk of future cardiovascular events."

A groundbreaking study in the Pakistan Journal of Pharmaceutical Sciences compared garlic tablets with the blockbuster blood pressure lowering drug atenolol and a placebo.  It found that garlic in daily doses ranging from 300 to 1,500 mg significantly reduced systolic and diastolic blood pressure in hypertensive patients compared to atenolol and placebo.[vii]

How does garlic lower blood pressure?  Sulfur compounds in garlic enter the red blood cells and are converted to hydrogen sulfide which dilates the blood vessels.  That helps boost blood flow and reduce blood pressure.

In another study Chinese researchers recruited 125 stroke patients and asked them how often they ate garlic.  The mean garlic intake of the group was 2.9 grams per day – about one clove.  Then they measured arterial blood flow using an ultrasound test.

Researchers found they could accurately predict blood flow based on the amount of garlic the patients reported eating.[viii]  Patients eating less garlic had poorer circulation.  Those eating more had better circulation.

Garlic has potent antibacterial powers and may be the life-saving answer to the growing problem of multi-drug resistant bacteria.  Studies prove that garlic can kill at least 13 types of infections – both bacterial and viral.

One study compared garlic to the antibiotic drug metronidazole in treating vaginal infections.  Every day, women in the study received either two 500 mg garlic tablets or two 250 mg doses of metronidazole.  After seven days the garlic reduced the active infection by 70% compared to 48% for the drug.  And garlic had no side effects making it a safer bet by far.  Metronidazole is a probable carcinogen with a wide range of side effects including nausea, diarrhea, vomiting, headache, dizziness, and abdominal pain.

Click here to learn how to treat a vaginal infection with a clove of garlic.

The Cochrane Collaboration in Australia documented a study in which garlic reduced the incidence of colds more than 50 percent.[ix]  Researchers gave 146 people either a placebo or a garlic supplement - standardized to 180 milligrams of allicin.  Allicin is the compound that gives garlic its pungent smell.

Garlic naturally reduces blood and tissue concentrations of lead.  And it's just as effectively as a common chelation drug.  A study published in the journal Basic & Clinical Pharmacology & Toxicology compared garlic to the chelation drug known as d-penicillamine.[x]

Researchers measured lead concentrations in the blood of 117 workers at a car battery plant.  Then the workers were randomly assigned to take either garlic (1.2 milligrams of allicin from approximately 1,000 mg of garlic extract, three times daily) or d-penicillamine (250 mg, three times daily).

The researchers concluded that

"garlic seems safer clinically and as effective as d-penicillamine. Therefore, garlic can be recommended for the treatment of mild-to-moderate lead poisoning."

Garlic has been proven time and again to be safe and effective.  Many studies have tested garlic oil, powder, or aged garlic extracts.  But eating and cooking with fresh whole garlic is a great way to get the benefits on a daily basis. Aim for one clove a day.

Add freshly crushed or chopped garlic to soups, stews, sauces, dressings, and vegetables.  But let your garlic sit for a few minutes after crushing or chopping it.  This allows the allicin to fully develop.  Heating the garlic or adding an acid (like lemon juice or vinegar) right away will kill off many of the beneficial compounds.