Views 64
Posted on:
Friday, March 29th 2019 at 11:15 am
Written By:
GMI Reporter
This article is copyrighted by GreenMedInfo LLC, 2019
Visit our Re-post guidelines 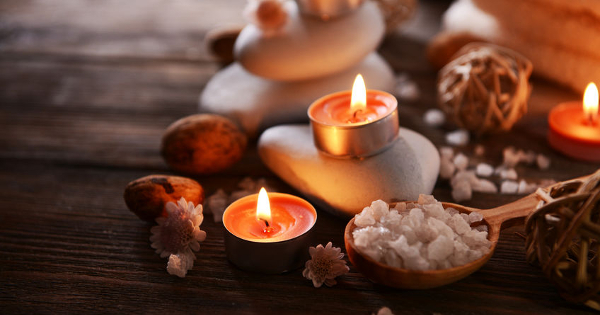 We all know that getting a massage is relaxing and that scents such as lavender and sweet orange smell great, but did you know that these simple, sensual modalities may be a pathway out of depression?

For anyone who is fortunate enough to live a long life, there will undoubtedly be episodes of sadness and even episodic depression. Aside from clinical depression which is exceptional and not just a normal part of aging, life changes such as increasing health problems, leaving the workforce to transition into retirement, and even the death of loved ones, present challenges that can trigger symptoms of depression. Therefore, wherever there are large concentrations of elderly people, there must also be non-clinical interventions that are easily accessible and provide effective mood support.

Addressing the needs of an aging populace is a major public health problem in China, a country with more than 1.4 billion inhabitants, 241 million of whom are over the age of sixty. The number of elderly individuals is expected to peak by 2050, when an estimated half-a-billion people will require access to nursing services.[1] The anticipated strain on public health care is, according to some government advisors, China's largest economic threat going forward.

China's increasingly mature population is coupled with a slowing down of overall population growth. This top-heaviness portends a future where there are fewer people to work and stimulate the economy, accompanied by growing demand from the elderly on public health services. A recent Time magazine article credits this trend in-part to "history's biggest social-engineering experiment," China's now-defunct one-child policy.[2]  Seeing the need to reverse the shrinking working-age population, this controversial policy ended in January 2016 after being in effect for 35 years.[3]

According to Hai Fang, a researcher with Peking University's China Center for Health Development Studies, the Chinese central government has "overall responsibility for national health policy, while local governments—provinces, prefectures, cities, counties, and towns—are responsible for providing services. [Chinese public health policy] is guided by the principle that every citizen is entitled to receive basic health care services."[4]

In order to meet the demands of providing health and wellness services to hundreds of millions of senior citizens, researchers in China are looking for ways to keep the elderly out of centralized nursing home facilities, instead focusing on interventions that will allow seniors to stay in their homes as long as possible, so-called "aging-in-place" solutions.[5]

Aging-in-place solutions can be medical in nature, providing they are easily self-administered such as measuring one's own blood sugar levels. Many holistic and alternative therapies easily fit this model. As part of the effort to identify effective treatments that fit the stay-at-home criteria, researchers at major Chinese universities are exploring a variety of alternative healing modalities in hopes of easing the growing strain on medical healthcare providers.

While there is a dearth of systematic reporting on rates of mental illness in China, geriatric depression is considered to be a major public health problem. Currently, many older adults reside in elder-care facilities where depression is a frequent side-effect. Since clinical and pharmaceutical treatments for depression are not the pervasive standard of care in China, holistic, aging-in-place solutions are being explored with the broader hope of eventually keeping the elderly out of these facilities and healthfully in their homes throughout life.

Aromatherapy and Massage: Easy and Effective

Scientists from the Sichuan Research Center of Applied Psychology in Chengdu, China conducted a study on the effectiveness of aromatherapy and massage as potential treatments for geriatric depression. The results of their prospective, randomized controlled trial were published in July 2018's Journal of Alternative and Complementary Medicine.

The study, entitled "Effectiveness of Aromatherapy Massage and Inhalation on Symptoms of Depression in Chinese Community-Dwelling Older Adults",[6] compared the intervention and follow-up effects of 8-weeks of using essential oils in aromatherapy inhalation and aromatherapy massage on symptoms of depression in adults aged 60 and older, living in a nursing-home community.

Participants were randomly assigned to one of three groups, each comprised of twenty adults. One group received aromatherapy massage, another group was treated using aromatherapy inhalation, and the final group was a control.

The aromatherapy inhalation group received 30 minutes of nasal inhalation of one drop of the essential oils compound blended in 10 mL of purified water, twice weekly for 8 weeks. The control group received no intervention.

After 8-weeks of interventions, the study revealed that both groups receiving aromatherapy-based treatments demonstrated significantly lower depressive scores on both the Short Form and Questionnaire when compared to control group participants. These scores remained lower at both post-test follow-ups. In contrast, Short Form and Questionnaire scores did not differ for control group participants at any of the four time points (pre-, post-, 6- and 10-weeks).

What's perhaps most encouraging is that 5-HT/Serotonin levels were demonstrably elevated as compared to pre-test values for both groups receiving some form of aromatherapy. Researchers concluded that both aromatherapy massage and aromatherapy inhalation may have important implications for alleviating depression in older adults.

Currently, one in six Americans take pharmaceutical drugs to treat depression,[7] an option that is less effective and more dangerous for aging populations due to contraindications with other medications. This alarming trend makes natural approaches to treating mood disorders more pertinent than ever before. And while depression can seem like climbing a mountain that keeps growing under foot, there are many simple, inexpensive, and readily accessible options that can produce dramatic improvements in mood.

Our feature study demonstrates the powerful effects that aromatherapy can have to slow and even reverse cognitive decline. This is reinforced by a 2018 study by Iranian scientists that demonstrated rose oil extract (Rosa damascena) positively affected cognitive impairment of dementia patients and also had significant effects on improving depression and behavioral problems.

In results that reinforce the potency of healing touch to heal depressive disorders, a 2007 study on acupressure demonstrated its effectiveness as a holistic intervention for COPD and resulting depression from breathlessness. When acupressure was applied to specific acupoints that promote relaxation and relieve dyspnea (difficult or labored breathing), results showed that Geriatric Depression scores, physiological indicators of labored breathing and oxygen saturation were all significantly improved as compared to those of the control group.

Mind-body interventions such as tai chi, massage, and even meditation, can be particularly effective at alleviating cognitive decline in aging adults. A 2016 study on music therapy demonstrated that nursing home residents who listened to music as a group 3-days a week for 8-weeks demonstrated measurable improvements in mood as well as decreased systolic blood pressure.

Food-based interventions are accessible to anyone at any age, and can often be employed on the most restrictive budgets. Medicinal plants such as turmeric have proven to be among the most highly effective holistic modalities we can employ in the prevention of degenerative brain diseases like dementia. Something as simple and cheap as taking pennies worth of magnesium a day provides an effective, safe, affordable alternative to dangerous and relatively ineffective pharmaceutical antidepressants. B-vitamin supplementation has been proven to slow the progression of Alzheimer's disease and prevent critical grey-matter loss in aging populations. And adding just one serving of greens to your daily food intake can slow brain aging by over a decade.

To learn more about what you can do to reverse the downward spiral of depression, consult the 86 research abstracts on depressive mood disorders on GreenMedInfo.com. 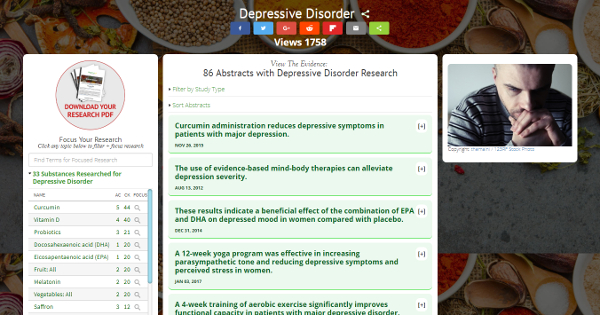