Views 43793
Posted on:
Thursday, December 14th 2017 at 3:15 am
Written By:
Sayer Ji, Founder
This article is copyrighted by GreenMedInfo LLC, 2020
Visit our Re-post guidelines 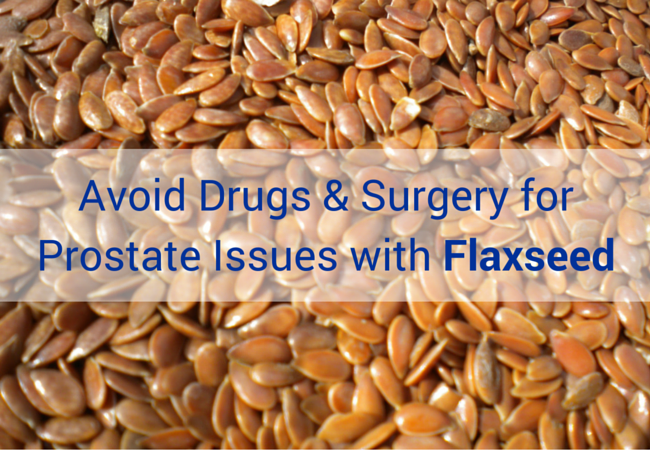 Millions of men face prostate issues, with treatment with drugs and surgery often making their problems worse. One study reveals that simply eating flaxseed may be the best way to improve your symptoms, and take back control of your health

A study published in the Journal of Medicinal Food titled, "Efficacy and Safety of a Flaxseed Hull Extract in the Symptomatic Management of Benign Prostatic Hyperplasia: A Parallel, Randomized, Double-Blind, Placebo-Controlled, Pilot Study," reveals that men who consumed an extract of flaxseed for swollen prostate (i.e. benign prostatic hyperplasia) saw significant improvement.

According to the study, The American Urology Association (AUA) Guideline, 2010, defines benign prostatic hyperplasia (BPH) as proliferation of smooth muscles and epithelial cells within the prostatic transition zone. The typical symptoms include:

BPH is one of the most widespread health conditions faced by men today, with the incidence rising to nearly 50% of the male population by the eighth decade of their lives. Moreover, countries like China and India are now seeing an exponential increase in BPH diagnoses as they increasingly adopt the Western diet, lifestyle, and medical system.

Current approaches include side effect heavy pharmaceuticals such as alpha adrenergic blockers and 5 a-reductase inhibitors, as well "gold standard" surgical procedures such as transurethral resection of the prostate (TURP), which so consistently produces surgery related impairments that there is an entire syndrome named after these side effects, namely, ​Transurethral Resection of the Prostate (TURP) Syndrome.

The human cost in both financial and existential terms is immense. This is why interest in safe, natural, affordable and effective alternatives is growing, and why the researchers felt compelled to test the hypothesis that eating flaxseed might provide an ideal alternative approach.

In the randomized, double-blinded, and placebo-controlled study, three groups of men, aged 45-75, with recently diagnosed BPH and an American Urological Association Symptom Index (AUASI) score of ‡ 13 , were given either a placebo, or a low or high dose of a lignin-rich flaxseed hull extract. More specifically:

The promising results were reported as follows:

"In this study, supplementation with the flaxseed hull extract provided greater relief than placebo in obstructive symptoms of BPH, such as sensation of incomplete bladder emptying, ''stopping and starting'' while urinating, weak urinary stream, and ''straining while urinating.'' Low and high doses of the flaxseed extract provided statistically significant improvements in the scores of these obstructive symptoms at week 8 as compared with baseline. In contrast to this, the placebo group did not show a statistically significant improvement with respect to these obstructive symptoms."

The treatment group did not see any sign of increased side effects relative to the placebo group, indicating how remarkably safe flaxseed is versus conventional treatment. Also, because the placebo group also saw a significant improvement, it is possible that the strong placebo effect may have overshadowed the real power of the intervention. We hope that in the future a non-pharmaceutical industry funded study compares flaxseed to both pharmaceutical and surgical intervention to assess its true power.

This study is highly promising for a number of reasons. First, flaxseed is a safe, time-tested, and highly nutritious food that has been researched for a wide range of health benefits. You can view over 70 health benefits we have identified here: Flaxseed research database. Anything that can be used as a nourishing food while at the same time significantly relieving human suffering from a common disease, is highly compelling.

But there is a deeper reason why flaxseed may work so well. Our bodies co-evolved with certain foods for hundreds of thousands of years. Certain foods contains phytocompounds which our bodies have become dependent upon for self-regulation and homeostasis It is possible that lignins are vitally important, as essential as vitamins for maintaining optimal health. Obviously BPH is not caused by a lack of surgery or synthetic chemicals, but it might be true to say that BPH is caused by the lack of an ideal diet which would include lignin rich foods like flaxseed. Cleary, therefore, flaxseed could be considered part of a root cause resolution approach to BPH, versus looking it as just a palliative "disease management" tool like most of the approaches within the conventional armamentarium. We also reported on a study which found, in the first study of its kind, that sesame seed contains as high -- if not a higher density -- of lignans than flaxseed.

Finally, BPH falls within the category of a condition that involves the abnormal growth of the very same epithelial tissue that cancer emerges within. Since flaxseed has been found to prevent and even regress cancerous epithelial growths, such as breast cancer, it is highly likely that flaxseed consumption may also be the best insurance policy out there to prevent prostate cancer from developing.

For more information on natural ways to address BPH, or prostate cancer, check out our two databases on the topic here: