A Baby Aspirin A Day Is A BAD Prescription For Most

Views 28009
Posted on:
Thursday, February 4th 2016 at 11:30 am
Written By:
Dr. Michael Murray
This article is copyrighted by GreenMedInfo LLC, 2016
Visit our Re-post guidelines 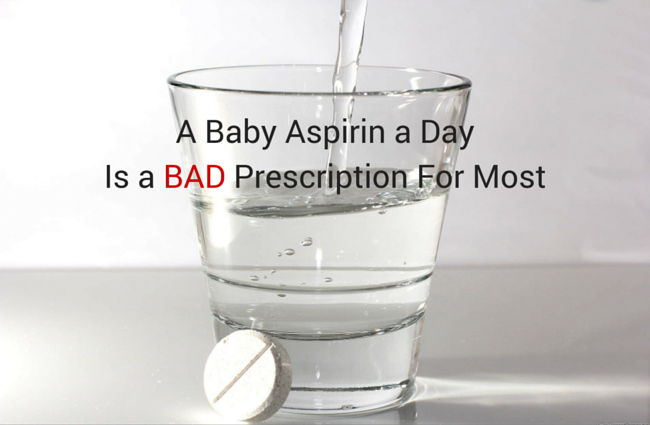 Many physicians recommend a baby aspirin a day to reduce the risk of heart attack.  But did you know that data shows this has ZERO clinical support?

One of the most popular recommendations for preventing a heart attack or stroke in healthy people is the recommendation of a baby aspirin or low dose aspirin. Although extremely popular, this advice has NO scientific support. According to two detailed reviews of all existing data published in the European Heart Journal the use of a baby aspirin a day has ZERO clinical support.

"currently available trial results do not seem to justify general guidelines advocating the routine use of aspirin in all apparently healthy individuals."

The other was even more damning, ending with

"There is no reliable evidence that aspirin used in the current fashionable doses of 50–100 mg/day is of any benefit in any common clinical setting."

In fact, the recommendation of a baby aspirin a day has just as much evidence showing that it does more harm than good. In addition to peptic ulcers, aspirin use is associated with an increased risk of a stroke due to cerebral hemorrhage as well as hearing loss and age-related macular degeneration.

Taking a baby aspirin a day is a common recommendation due to their effects on blood platelets or thrombocytes. These are small, disc shaped blood cells that are involved in the formation of blood clots through a process of aggregation (clumping together). Excessive platelet aggregation is an independent risk factor for heart disease and stroke. Once platelets aggregate, they release potent compounds that dramatically promote the formation of the atherosclerotic plaque, or they can form a clot that can lodge in small arteries and produce a heart attack or stroke.

The adhesiveness of platelets is determined largely by the type of fats in the diet and the level of antioxidants. While saturated fats and cholesterol increase platelet aggregation, omega-3 fatty acids (both short-chain and long-chain) and monounsaturated fats have the opposite effect. In addition to the monounsaturated and omega-3 fatty acids, antioxidant nutrients, flavonoids, garlic preparations, and vitamin B6 also inhibit platelet aggregation

Since aspirin blocks the ability of platelets to aggregate and form clots it has become a very popular recommendation to prevent a first heart attack as well as a second event in people with a history of a prior heart attack. While some studies have shown a significant reduction in the risk of a heart attack with the use of 325 mg or higher of aspirin every day or every other day, these same studies have also shown problems with aspirin including adverse bleeding events.

Aspirin and other non-steroidal anti-inflammatory drugs (NSAIDs) are associated with a significant risk of peptic ulcer as well as cerebral hemorrhage (resulting in a stroke). Even a dosage of 75 mg/day (the size of a baby aspirin) is associated with a 2.3-fold increased risk of ulcers compared with 3.9 fold increased risk at 300 mg/day and 3.2-fold risk at 150 mg/day. There is no difference in gastrointestinal bleeding rates in those given enteric-coated or non-enteric-coated aspirin.

There is no clinical evidence of benefit of aspirin at dosages of 50 to 150 mg per day for any clinical indication in adults despite its popular prescription.

Two detailed reviews were conducted and published in the November 21, 2013 issue of the European Heart Journal. In the first study,1 the aim was to review the updated evidence for the efficacy and safety of low-dose aspirin in preventing heart attacks in patients who had not experienced a prior heart attack (i.e., primary prevention). Results from nine completed primary prevention trials were compiled and included over 100,000 participants, with an average follow-up of 6 years.

The analysis showed similar results to the individual studies. There is no benefit and significant risk, so Dr. Carlo Patrano asked an important question

"So, why is aspirin used relatively liberally for primary prevention, particularly in certain countries (e.g. the USA), despite these regulatory constraints and medical uncertainties?"

The simple answer to this question is marketing propaganda highlighting only part of the story. The second review2  actually provided a better answer to the question because it focused a bit more on the topic of bias in the medical literature. Here is an example of the author's argument of significant bias:

"Many of the published studies of aspirin have a peculiar similarity in that they were clearly neutral but published as having a positive result."

In other words, the study showed no overall benefit with aspirin therapy, yet in the reporting of the result somehow got mangled. For example, in the US Physicians' Health Study it was reported that there was a substantial 44% reduction in fatal and non-fatal myocardial infarction with aspirin therapy, however, in actuality the total number of fatal myocardial infarctions and sudden deaths was no different in the aspirin group when compared to the placebo group. Yes, there was a significant decrease in non-fatal heart attacks, but there was NO difference in the number of people dying between the two groups

It was suggested that aspirin conceals rather than prevents heart attacks. If it truly was effective in reducing heart attacks it should also reduce death due to heart attack. And, as the author of the study, Dr. John Cleland, stated "For primary prevention, aspirin does not!"

Bottom line is that taking an aspirin a day is NOT going to help you live longer.

For a complete discussion on natural approaches to prevent heart disease, please download the PDF version of my book on Cholesterol and Heart Health just click here.

The bottom line is that in my opinion, the best approach to preventing heart attacks is not low-dose aspirin. The first alternative to aspirin is one too often overlooked by many physicians—diet. Several studies have shown that dietary modifications are not only more effective in preventing recurrent heart attack than aspirin but can also reverse the blockage of clogged arteries. In particular, studies with the Mediterranean diet have shown it to be especially effective.

Here is a brief summary of a natural prescription as an alternative to aspirin in the primary prevention of heart disease: