The Battle Over Genetically Modified Organisms

Views 4428
Posted on:
Wednesday, August 15th 2012 at 5:00 am
Written By:
Orthomolecular News Service
This article is copyrighted by GreenMedInfo LLC, 2012
Visit our Re-post guidelines 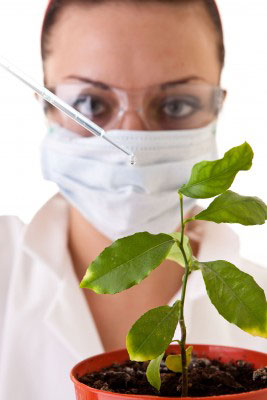 Controversy over Genetically Modified Organisms (GMOs) has been increasing in intensity.

The biotech industry's history of mendaciousness regarding GMO plants extends all the way back to the first test plots of GMO crops. We were assured (apparently without any basis in fact) there was no chance whatever of the genes spreading to other plants or weeds.

As has been the case ever since, these bland and unverified assurances turned out to be either wishful thinking or a willful lies, unsupported by any testing. Within three years, the weeds surrounding the GMO crop fields showed the same genetic modification and resistance to pesticide as the GMO crops. By this time, though, the genie was already out of the bottle.

While touting organic food, and planting an organic garden on the White House grounds, President Obama's administration has turned over US agriculture lock, stock and barrel, to Monsanto, appointing Monsanto rooter and former governor of Iowa Tom Vilsack to the post of Secretary of Agriculture, and former Monsanto Vice President for Public Policy and lobbyist Michael Taylor the office of Deputy Commissioner for Foods, the number two position in the USDA (US Department of Agriculture).

Several GMO crops were promptly approved by the USDA for agriculture. Tom Vilsack flew around the campaign trail on private jets provided by Monsanto (https://www.greenchipstocks.com/articles/usda-backs-monsanto-caves-under-white-house-pressure/1236).

The "big six" manufacturers of genetically modified seeds, have used their seemingly limitless funds to force GMO agriculture on the entire US and are on track to extend its forcible conversion of the world's crops to all other countries. They have used their economic and marketplace power, along with massive government influence, to crush farmers and organizations who refuse to use GMO seeds.

They continue their goal of a complete takeover of American food agriculture by gradually purchasing the seed companies that would otherwise provide an alternative seed source for farmers averse to GMO crops.

Foxes in the FDA Henhouse

The biotech industry has often made representations about GMO products that have proven false in the long run, proving that they either have not tested their product properly or are lying about the results. This is highly disturbing, given that one of the representations they have made is that GMO crops are safe for human and animal consumption.

The FDA has relied totally on these representations to approve the crops for use in agriculture and food production, yet no independent testing of the crops has ever been done. Monsanto claims that their crops are "substantially identical" to the unmodified crops when pressed for safety testing, yet claim that the crops are different enough from natural crops to warrant patent protection. At very least, one of these two assertions must be false.

When asked about whether their GMO crops were safe, Monsanto's Director of Public Communications went on record saying, "Monsanto should not have to vouchsafe the safety of biotech food. Our interest is in selling as much of it as possible. Assuring its safety is the F.D.A.'s job" (Philip Angell, Monsanto's director of corporate communications. "Playing God in the Garden" New York Times Magazine, Oct 25, 1998.)

For its part, the FDA seems to have abdicated its position as guarantor of food safety, too. "Ultimately, it is the food producer who is responsible for assuring safety" (FDA, "Statement of Policy: Foods Derived from New Plant Varieties" [GMO Policy], Federal Register, Vol. 57, No. 104, 1992, p. 229.)

Do the words "catch" and "twenty-two" come to mind?

Any experienced farmer will confirm the dangers of monoculture. Strains of crops that produce well during wet seasons may fail during unusually dry seasons. Strains that are resistant to one variety of pest may be highly sensitive to a newly-introduced exotic pest. Monoculture, or depending for all your sustenance on one strain of a food plant, is tantamount to food suicide, as some weakness, either to stress, pests or even some dead-end on a multi-generational reproductive series could prove.

If the one strain that we have fails to be viable in the long run, we risk massive famine and all its attendant ills. Yet, with the collusion of the US government, this is the scheme that the biotech industry is forcing on American agriculture, and, if they have their way, on the entire world. We believe that we should have some say in the matter of whether we risk mass starvation because of a reckless, power and money grab by the biotech industry. Our corrupt congress and regulatory agencies disagree.

One of the common defenses put forth by producers of deadly substances, whether they be vaccines, pharmaceuticals or GMOs, is, "There is no evidence showing that XYZ is harmful to human health." Such a claim would be akin to a mass murderer claiming that since nobody actually caught him killing anyone, he should be deemed innocent, and the police believing him!

I submit that this standard of innocence is not good enough when promoting a product (GMOs or vaccines) or technology (nuclear power generation) that has the potential to eliminate life on this planet. Instead, there should, must, in fact be strong and incontrovertible evidence that XYZ is safe for human life, and that it accomplishes the task it is intended to perform, with strong and independent oversight enforcing safe operation or provision.

Barring that, the substance or technology should never be allowed out of the laboratory. The current push by our pandering politicians to deregulate more industries has all the potential for global catastrophe that resulted from deregulating our financial system.

That our government allows, even promotes such items, and repeats uncritically the specious, undocumented, untested, and all-too-often false claims of GMO producers, speaks to one of two disquieting choices:

Either way, the regulatory agencies should be disbanded, saving us all the multi-billion-dollar annual budgets that are clearly being wasted to maintain the sham of protecting public safety.

There is no third explanation for the behavior of the FDA and USDA around GMO foods, for the FDA, CDC and NIH promoting dangerous pharmaceuticals while attacking proven natural remedies, and for the Nuclear Regulatory Agency promoting more dangerous nuclear plants in the wake of Three Mile Island, Chernobyl and Fukushima.

Without accountability, corporations will run roughshod over populations, corrupt politicians and regulators will enrich themselves at our expense, and life on the planet will be endangered. If we don't finally wake up to these facts, and very soon, we are all in real trouble.