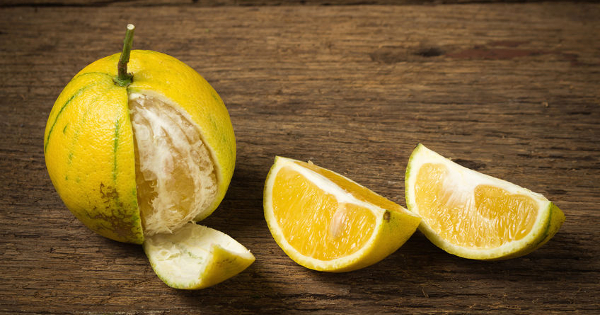 Bergamot oranges are bitter fruits that grow in one of the world’s most beautiful coastal regions. Could the scenic ocean vistas be responsible for the calm, relaxing effects we derive from smelling and ingesting the bright, citrus essence of this amazing fruit?

A recent study aimed at developing new treatment strategies for cognitive dysfunctions like schizophrenia has hit upon promising potential for bergamot, the citrus extract best-known for flavoring Earl Grey tea. Cultivated exclusively on the coast in Southern Italy, the Bergamot orange (Citrus bergamia) yields a bitter fruit that possesses magical properties. The essential oils extracted from its thick rind are added to products as both a flavoring and a perfume, evidence that we can benefit from this natural wonder in many fruitful ways!

Medical science clearly acknowledges that extracts of bergamot have the power to protect human health. Currently, the GreenMedInfo search database has 112 scientific articles reflecting these potent abilities. Here are just a few of the proven health benefits of bergamot:

It is this intersection of mental health and potential uses for bergamot that our featured study explores. Non-pharmaceutical or otherwise novel approaches to treating schizophrenia are few, and in terms of medical research, far in-between. This study, performed by researchers from the Biomedical Department at the University of Messina in Italy, is a ray of hope for anyone dissatisfied with traditional pharmaceutical approaches. As you will see, bergamot shows great promise as a natural, health-supporting adjunct to preventing long-term disability in patients with schizophrenia.

The outpatients were provided an oral supplement of 1000 mgs of “BPF,” bergamot polyphenolic fraction, in addition to their existing regimen of atypical antipsychotic meds. Participants were dosed daily for a total of 8 weeks and subjected to a battery of psychiatric, verbal fluency, and word-color association tests throughout the study period. Researchers were looking for the effect of BPF, if any, on cognitive/executive functioning in these patients.

At the study’s end-point after patients had received 8 weeks of BPF supplementation, psychiatric test results were analyzed. BPF had provided a measurable boost to scores: improvements were observed in tests of verbal fluency, and errors were significantly reduced on association tests. Moreover, an improvement trend was observed for other cognitive variables being measured. According to researchers, “The findings provide evidence that BPF administration may be proposed as a potential supplementation strategy to improve cognitive outcome in schizophrenia.”[1]

Mental health issues are increasingly being recognized as a public health crisis for which safe, cost-effective therapies are direly needed. Bergamot’s brain-enhancing power presents a unique opportunity for the development of nutraceutical treatments for several common mental health disorders.

Bergamot extract, made of highly concentrated polyphenolic compounds, possesses an invigorating, bright citrus essence that not only enhances cognitive function, it can also promote feelings of calmness and positivity. A 2017 pilot study using bergamot essential oil found that just 15 minutes of inhalation exposure improved participants' positive feelings by nearly 20% over the control group. The study produced an additional, unexpected result: more individuals wanted to use the treatment over control (non-use), suggesting that even brief exposure to bergamot’s aroma may enhance a person’s willingness to participate in medical trials. Researchers considered these results to be solid preliminary evidence that bergamot aromatherapy can be an effective adjunct treatment to improve individuals' mental health and well-being.

Other preclinical studies have reinforced that bergamot essential oil is “endowed with remarkable neurobiolological effects.”[2] It is believed that inhaling bergamot essence can affect synaptic transmissions, modulate electroencephalographic (EEG) brain activity, and imbue neuroprotective and analgesic properties. It’s use as aromatherapy is widely recognized to help minimize symptoms of anxiety and alleviate mild mood disorders, although hard clinical proof is still scant.

A 2017 animal trial added to the cumulative evidence by examining bergamot essential oil’s anti-anxiety (anxiolytic) effects on rats subjected to a forced swimming task. Results showed that the oil’s effects were calming, relaxing, and attenuated anxiety-like behavior in subjects in ways that the traditional anxiolytic drug, benzodiazepine diazepam, did not effect.[3]

Bergamot’s mental health benefits may stem from potent antioxidant and anti-inflammatory properties. A 2017 study mapped the flavanone profile of bergamot juice (the flavonoid responsible for the juice’s vivid, citrus aroma) and identified 16 unique compounds. A human study was then conducted to determine the bioavailability of each of these compounds when ingested. Up to 12 flavanones were detected in blood plasma and urine after consumption of bergamot juice, two of which were able to modulate inflammation in human tissues.

A 2014 animal study was conducted to determine if bergamot juice could be used to combat serious inflammatory diseases of the bowels, namely colitis and IBD, irritable bowel disease. Treatment with bergamot juice decreased the appearance of diarrhea and body weight loss in mice and reduced the flow of pro-inflammatory cytokines into the blood. It also reduced cellular damage in the colon and associated inflammation. Researchers concluded that the administration of bergamot juice created a health-supporting, anti-inflammatory response which may be beneficial for the treatment of IBD in humans.

Another animal study whose aim was to test the beneficial effects of bergamot juice on intestinal inflammation examined its use in cases of intestinal reperfusion or I/R injury. Reperfusion injury occurs when blood flow is halted to tissues, creating a period of lack of oxygen that results in inflammation and oxidative stress when blood flow returns to the area. Results demonstrated that bergamot juice was able to reduce the production of inflammatory markers, lower oxidative stress, and minimize overall damage to cells. The study concluded that bergamot juice could represent a new treatment option for the inflammatory events that occur during intestinal I/R injury.

This amazing anti-inflammatory effect is not limited to internal conditions. Bergamot extract was tested and found to efficiently block proinflammatory actions on human keratinocytes - skin cells containing keratin - giving rise to potential topical use in some inflammatory diseases of the skin.

No article on bergamot would be complete without mentioning the eye-popping effects that have been observed on levelling out the human body’s cholesterol levels. Several recent human studies have proven that bergamot supplementation improves cholesterol metabolism via multiple pathways, including effectively lowering LDL, or “bad” cholesterol, while simultaneously increasing HDL, the “good” cholesterol.

In early 2015, the results of a six-month-long prospective study on this subject were published in the journal, Frontiers in Pharmacology. The study’s objective was to identify if bergamot extract can be an effective, alternative therapeutic approach for managing dyslipidemia, a condition characterized by an abnormal level of cholesterol and other fats (lipids) in the blood.[4] Eighty test subjects with a median age of 55 years who were all diagnosed with moderate hypercholesterolemia were studied for a period of 6-months. Hypercholesterolemia is characterized by plasma LDL-cholesterol concentrations between 160 and 190 mg/dl, whereas normal levels are <129 mg/dl. Participants were given a 150 mg dose of Bergavit R® each day during the study.

As if mental health and heart health benefits were not enough, research has even attributed anti-aging benefits to this miraculous supplement! Other studies have concluded that bergamot extract can be an effective support for the 100-million U.S. adults living with diabetes.[5] Therapeutic effects include helping to prevent diabetes-related osteoporosis, supporting a healthy liver by combating diet-related non-alcoholic fatty liver disease, and protecting sensitive nerve endings that can become frail due to side-effects of diabetes. 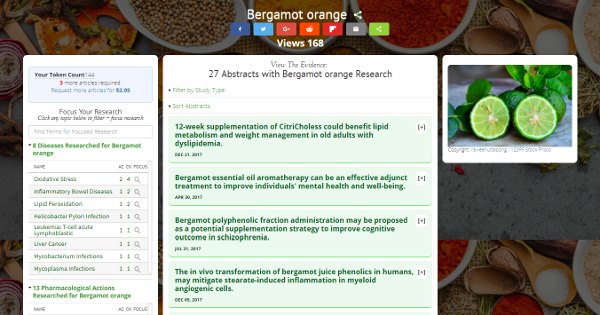