Views 142202
Posted on:
Saturday, September 14th 2019 at 7:15 am
Written By:
Sayer Ji, Founder
This article is copyrighted by GreenMedInfo LLC, 2019
Visit our Re-post guidelines

A randomized clinical trial reveals that the ancient healing food known as nigella sativa (aka "black seed"), once known as the "remedy for everything but death," may provide an ideal treatment for the autoimmune thyroid condition known as Hashimoto's disease, which is the most common cause of hypothyroidism.

The study took 40 patients with Hashimoto's thyroiditis, aged between 22 and 50 years old, and randomized them into one group receiving two grams of powdered encapsulated Nigella sativa and the other 2 grams starch placebo daily for 8 weeks.. Changes in anthropometric variables, dietary intakes, thyroid status, serum VEGF and Nesfatin-1 concentrations were measured.

The positive results were reported as follows:

"Our data showed a potent beneficial effect of powdered Nigella sativa in improving thyroid status and anthropometric variables in patients with Hashimoto's thyroiditis. Moreover, Nigella sativa significantly reduced serum VEGF concentrations in these patients. Considering observed health- promoting effect of this medicinal plant in ameliorating the disease severity, it can be regarded as a useful therapeutic approach in management of Hashimoto's thyroiditis."

Hashimoto's disease can be a devastating condition, especially when treated with a conventional medical approach. Also known as chronic lymphocytic thyroiditis, it is a progressive autoimmune disease where, in the many cases, the thyroid gland is eventually destroyed. It is considered the most common cause of hypothyroidism in North America. Some additional salient facts are:

The standard of care is to 'manage,' or artificially suppress, modulate, and/or replace hormone levels. Hypothyroidism caused by Hashimoto's thyroiditis is most commonly treated with synthetic T4 in an attempt to reduce TSH levels under 5.0 U/ml. This often results in the appearance of TSH normalization, with downstream adverse effects, and without concomitant improvements in well-being. Dr. Kelly Brogan, MD, further elaborates:

"For those who do receive the label of hypothyroid, they remain obliquely objectified by their lab work as their doctors use synthetic T4 - Synthroid - to attempt to move their TSH within range, more often leaving them symptomatic but "treated" because of poor conversion to active thyroid hormone (T3) and suppression of natural T3 production because of their now lower TSH."

It should be noted that while synthetic T4 is described by its manufacturer to be "identical to that produced in the human thyroid gland," it is in actuality quite different. This has to do primarily with the fact that while the primary structure of amino acids in synthetic thyroxine produced from genetically modified yeast is virtually identical to that produced by the human thyroid gland, the secondary, tertiary and quaternary folding patterns of that protein may differ in significant ways. Known as the protein's conformational state, a slight change in folding structure can alter function profoundly. This could account for widespread reports of dissatisfaction among those treated with synthetic thyroid versus natural forms extracted from the glands of pigs.

Even if the T4 produced synthetically were identical in structure and function to natural T4, the reality is that virtually all T4 found naturally in the human body is not found in its free state.

In a post titled, "Natural Desiccated Thyroid and Synthetic are NOT the Same," from thyroid-s.com, this point is driven home powerfully:

"To graphically illustrate the huge differences between Natural Desiccated Thyroid as compared to T4 Only Synthetics, please consider this graphic. It attempts to show the tiny T4, T3, T2, T1 and Calcitonin hormones tightly bound to the very large thyroglobulin molecules as found in Natural Desiccated Thyroid. Remember that the Thyroglobulin molecule is approximately 1,000 TIMES BIGGER than the T4 molecule. Then it also shows the tiny T4 molecules as found in synthetic T4 only products. The pharmaceutical companies would have us believe these are bio-identical. We will let you decide."

Moreover, research published in 2010 in the Archives of Pharmaceutical Research shows that levothyroxine preparations are widely contaminated with a "mirror image" stereoismer called dextro-thyroxine at a level as high as 1-6% by dry weight. D-thyroxine violates the left-handed 'chirality' of natural thyroxine and is a powerful, cardiotoxic endocrine disruptor.

The process by which levothyroxine sodium is produced today is highly synthetic and involves the use of a wide range of chemicals. One patent describes the dizzyingly complex process as follows:

Clearly, synthetic T4 treatments, even if effective at suppressing TSH, may not produce clinical outcomes that translate into improvement in well-being. Nor do they address or resolve the root causes of Hashimoto's, which include selenium deficiency, wheat intolerance, and vitamin D/sunlight deficiency [view studies on these links on our Hashimoto's research dashboard], along with a wide range of still yet unknown environmental, dietary, lifestyle, and mind-body factors. Perhaps this latest study on black seed provides a new avenue for mitigating and correcting the metabolic and endocrine factors that are disturbed in Hashimoto's disease, or at least complementing conventional treatment with a food-based approach that can improve both the subjective and objective aspects of the disease.

To learn more about the powerful health benefits of black seed visit our research dashboard on the subject: Nigella Sativa (aka Black Seed) 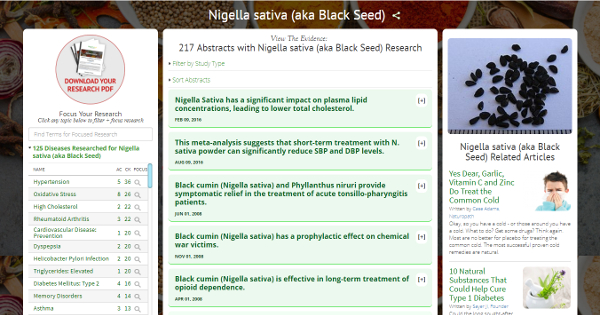