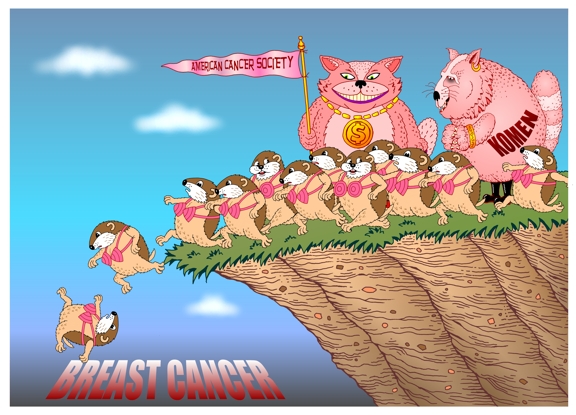 It does, according to at least 5 research studies and numerous healthcare providers, including oncologists and MD's. Even some lingerie manufacturers have developed new bra designs hoping to minimize lymphatic constriction and thereby help prevent breast cancer, citing the bra-cancer theory for their patents.

But it doesn't, according to the American Cancer Society and the Susan G. Komen Foundation, fund raising giants of the cancer detection and treatment world, which consider the link absurd and unworthy of serious consideration, and unquestionably assume that research showing a link must have some other explanation besides bras.

Shrugging off the bra-cancer link is killing hundreds of thousands of women and wasting billions of dollars in unnecessary detection and treatment, according to husband and wife medical anthropologists, Sydney Ross Singer and Soma Grismaijer, co-authors of Dressed To Kill: The Link Between Breast Cancer and Bras (Avery/Penguiin Putnam 1995; ISCD Press, 2005).

Singer and Grismaijer are calling for a boycott of these organizations until they stop dismissing the bra-cancer link and begin educating doctors and women about the cancer hazards of wearing tight bras.

Their research on the bra wearing habits of US women with and without breast cancer showed that bra-free women have about the same incidence of breast cancer as men, and that the tighter and longer a bra is worn the higher the incidence rose, up to 100 times greater for 24/7 bra wearers.

When they first notified cancer organizations about their discovery, they were completely ignored or ridiculed. Now, 20 years later, the American Cancer Society and the Susan G. Komen Foundation still ridicule the information out of hand, and try to explain away the link as a ridiculous "myth".

Why are women not hearing about this from the ACS and Komen Foundation? Why are these organizations, so eager to fund raise for a cure and so opposed to preventing this disease by addressing the bra-cancer link? Could it be because lingerie companies donate to their charities? Could it be that preventing this disease by challenging the cultural norm of bra wearing is too taboo for these detection and treatment focused organizations?

According to Singer and Grismaijer, whatever their reason, it is wrong for the bra-cancer link to be dismissed and ignored. Because of this unscientific stonewalling of this information, over the past 20 years 2,000,000 women in the US alone have gotten breast cancer who may have prevented it by simply loosening their bra and wearing it less time each day.

Singer and Grismaijer suggest that whenever the ACS or Komen Foundation ask for a donation, send them your bra, instead! This will give them the message, and help you prevent breast cancer at the same time.

"Scientific evidence does not support a link between wearing an underwire bra (or any type of bra) and an increased risk of breast cancer. There is no biological reason the two would be linked, and any observed relationship is likely due to other factors."

Internet e-mail rumors and at least one book have suggested that bras cause breast cancer by obstructing lymph flow. There is no good scientific or clinical basis for this claim.

STUDIES THAT SUPPORT THE BRA/CANCER LINK: