Views 5637
Posted on:
Friday, September 14th 2012 at 5:00 am
Written By:
Judy Slome Cohain, CNM
This article is copyrighted by GreenMedInfo LLC, 2012
Visit our Re-post guidelines 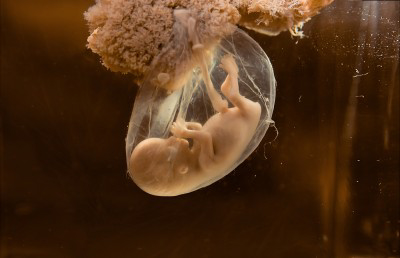 How often does Amniotomy cause Cord Prolapse after 36 weeks?

Cord prolapse, a cause of permanent disability and death, can be caused by amniotomy at or near term. To achieve optimal neonatal outcomes, the amniotic sac should not be ruptured artificially to speed up labor or induce labor.

Playing with water balloons provides a way to understand cord prolapse.  If you make a hole in the lowest part of a water balloon, this causes water to rush out.  If a rope were inside the water balloon, the rope will also be directed downward with the water.  Whether the rope or a loop of rope comes out of the hole depends on how thick the rope is compared to the size of the hole.  The amniotic sac is a water balloon around the fetus. The fetus receives oxygen through a rope-like umbilical cord. Tearing a hole in the bottom of the amniotic sac can cause part of the umbilical cord to flow downward and lodge next to the fetal head or flow out of the sac along with the amniotic fluid leaving a loop that can be squeezed between the scull of the fetus and the mother's pelvic bones. This is called umbilical cord prolapse.

Umbilical cord prolapse happens at about 4 per 1000 full term hospital births (23,29) and more frequently at preterm, twin and breech births.  It's importance is due to it's ability to decrease or cut off the fetal oxygen supply causing permanent damage like cerebral palsy or death.(34)

The highly regarded 2006 Continuing Medical Education review from OBGYN Survey, which reviews 66 references on cord prolapse (38) reports 10% of cord prolapse as being associated with amniotomy but reports that amniotomy does not cause cord prolapse. No recommendations for limiting amniotomy are made.  One reference(23) recommends "careful rupture of membranes in order to reduce the occurrence of cord prolapse".  Experience with water balloons teaches that there is no way to carefully pop one.

The ACOG bulletin on induction of labor reports "the potential risks associated with (N.B. not caused by) amniotomy include prolapse of the umbilical cord, chorioamnionitis, significant umbilical cord compression, and rupture of vasa previa" but amniotomy is considered "not well evaluated."(35) According to Best Practice & Research Clinical Obstetrics & Gynaecology amniotomy is best practice except for those of positive or unknown HIV status.(36)

Artificial rupture of membranes is standard practice world wide.   The current induction of labor rate in the US is about 25% of births and artificial rupture of membranes is standard protocol for inductions.    In the absence of induction, the membranes are also nearly always artificially ruptured at some point before birth.   It is almost unheard of for a hospital practitioner to have ever seen a baby's head born inside an intact sac.  Yet where membranes are not ruptured and vaginal exams are extremely restricted, in 5% of births the baby's head is born inside an intact sac, 10% rupture before contractions start, and the rest (85%) remain intact until the woman gives her first really strong push.  (42)

The literature reveals a puzzling avoidance of examining the relationship between amniotomy and cord prolapse. Despite the simplicity of the mechanism and the dire damage it can cause, to date, only 2 of the 33 studies that were supposedly intended to uncover causes of and factors associated with cord prolapse state the obvious:  artificial rupture of membranes can cause the umbilical cord to prolapse.   The 33 published studies are listed below in red.

Of those 33 studies, 26 (79%)  look at every possible factor imaginable that might be associated with cord prolapse, other than amniotomy, not even evaluating amniotomy.  Of the 7 studies (24-30) that evaluated amniotomy as a risk factor,  2 (25,29) observational studies found a direct relationship between amniotomy and cord prolapse.  Usta et.al. (25): "Obstetrical intervention preceded 41 (47%) cases of cord prolapse: 9 cases occurred after amniotomy, 4 cases after scalp electrode application, 6 after intrauterine pressure catheter insertion, 7 after attempted external cephalic version, 1 each after manual rotation of the fetal head and amnioreduction. We conclude that obstetrical intervention contributes to 47% of umbilical cord prolapse cases."  Levy et.al. (29) "Obstetric intervention is associated with nearly one in five cases of cord prolapse and represents a readily preventable cause of maternal and perinatal morbidity."

The other 5 studies (24, 26-28,30) denied a causal relationship.  Those 5 studies proposed that amniotomy does not cause cord prolapse because the rates of amniotomy are similar (not significantly different) among the group that experienced cord prolapse and those who did not.   This logic is obviously flawed, and though it may appear to belabor the obvious, some examples from other fields of study may be helpful. It is an accepted scientific fact that men may or may not contract AIDS from any single event of intercourse with an AIDS infected woman.

Comparing men who got AIDS to men who didn't get AIDS after exposure to AIDS will not unravel the cause of transmission. It is an accepted truth that children can prevent being hit by a speeding car by looking both ways before they cross the street and not crossing if they see a speeding car coming. Comparing children who were hit to children who were not hit, may not uncover the relevant fact, whereas comparing children who always look before they cross to those who do not, might.

What the 5 case controlled studies did was compare a group who had cord prolapse (got hit, got AIDS) to those who did not have cord prolapse (didnt get hit, no AIDS). Both groups had statistically similar rates of amniotomy (not looking before crossing, sleeping with infected women).  If scientists in non-obstetric fields used the logic that was used by obstetricians to prove amniotomy does not cause cord prolapse, they would have concluded that there is no value in looking before you cross and no risk of getting AIDS from intercourse with a woman with AIDS.

The optimal way to study amniotomy, would be to compare people who always look both ways before crossing (no amniotomy) to those who never look both ways (amniotomy).  This would be best carried out in a randomized trial where patients are randomly assigned to either no amniotomy or amniotomy at some point during labor.  This study design was attempted 15 times. In the execution of these 15 studies however, practitioners ignored the experimental protocols and broke the membranes in both the study and control groups.   A 2007 Cochrane review updated in 2011 (39) of these 15 trials adds up to a total of 5,583 women.  The review found that almost all of the women allocated to the group where membranes were to be left intact, were treated with amniotomy at some stage in their labor and the intention to preserve intact membranes was not upheld.

There were 0 cord prolapses among 5,948 births where following protocol was followed:  minimal vaginal exams (usually none at all the entire labor), 0.4% amniotomy performed only if at least 5 cm dilated, head engaged, and as a last resort effort for non-progress, before a transfer to hospital; during the last 30 years of consecutive births by Ilana Shemesh (1,755 births), Agnes Gereb (3,500 births), Judy Slome Cohain (450 births), Rankin Inlet Birthing center (253 births)(41).

It is obvious for those who have played with water balloons that rupture of membranes, whether it happens naturally or artificially, can cause the cord to prolapse or be compressed between the fetal head and the pelvic bones, yet this is denied by the majority of medical research.  It may be deduced from this that the majority of birth practitioners are reticent about exposing the relationship of between breaking the sac to cord prolapse, perhaps due to liability issues.

When amniotomy rates are compared to umbilical cord prolapse rates, cord prolapse increases proportionately with the increased practice of amniotomy. Due to a lack of willingness of practitioners to carry out randomized studies, extracting published data from related papers is the best data available.  In addition to cord prolapse, amniotomy can cause fetal and maternal infection, increased rates of fetal distress due to cord compression, increased prematurity, bleeding from accidental tearing of umbilical vessels (vasa previa), and increased pain.

Watchful waiting appears to have better outcomes for the fetus than amniotomy. Amniotomy can be compared to  crossing the street without looking both ways and intercourse with an AIDS infected woman.  The critical difference between those risk taking behaviors and amniotomy is that breaking the amniotic sac is a risk that affects someone other than the risk taker.  Where the decision to do amniotomy is based only on what is best for the newborn, amniotomy would rarely be performed.

Cord prolapse has better outcomes for the newborn when it happens in hospital, than at home.  Cord prolapse has not been observed during attended full term labor when no vaginal exams or amniotomy were performed.   Restricting the use of vaginal exams and artificial rupture of membranes, appears to eliminate the risk of cord prolapse as a justification for planned hospital birth.