Breast Cancer and Leptin – How to Become More Proactive in Prevention 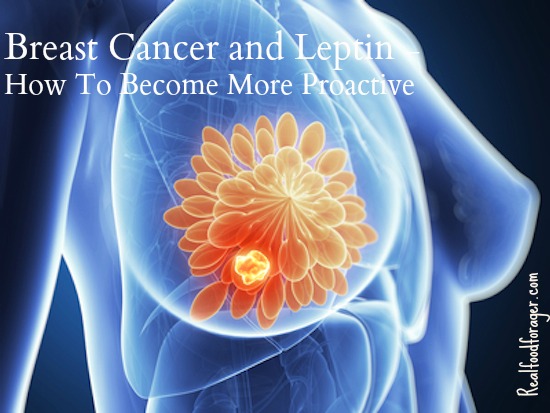 We need to be a lot more proactive if we are going to prevent breast cancer. With science behind certain actions, we can accomplish that goal.

Leptin is a hormone made by fat cells (adipose tissue) that acts on the brain to regulate food intake and body weight.  The level of circulating leptin is proportional to the total amount of fat in the body. Leptin signals the brain that the body has had enough to eat, producing a feeling of satiety. However, there is a lot more to leptin than just involvement in appetite control.

Leptin seems to be involved in reproduction by stimulating gonadotropin-releasing hormone from the hypothalamus.  Some studies have indicated that leptin levels outside an ideal range can have a negative effect on egg quality and outcome during in vitro fertilization.

Leptin can affect bone metabolism via direct signaling from the brain. It is well-established that leptin is involved in the regulation of the inflammatory response. It has been further theorized that leptin's role as an inflammatory marker is to respond specifically to adipose-derived inflammatory cytokines. Circulating leptin seems to affect the HPA axis, suggesting a role for leptin in the stress response.

There is a positive correlation with serum leptin and estrogen levels in premenopausal women. However, the increase in obesity in postmenopausal women increases leptin levels, which increases insulin resistance.

Research has found that breast cancer cells express unusually high levels of leptin and its receptors. Furthermore, leptin and adiponectin pathways are involved in proliferation processes in breast cancer.  Leptin turns on estradiol signaling inside the cell, so when leptin hits the receptors, it is just as if estrogen hit the receptors – even in the absence of estrogen.

Additionally, it has been found that when leptin is high, Tamoxifen does not work as well to block estrogen.

Leptin may increase the local production of estrogens by driving aromatase activity. Leptin turns on aromatase and it becomes a cycle of estrogen stimulation (even in the absence of estrogen). Leptin acts as a cell growth factor and enhances the proliferation of various tumors including endometrial carcinoma.

Aromatase is an enzyme that turns on the conversion of estrogen from androgens (source). Aromatase is present in many kinds of tissue, such as breast, skin, brain, adipose, muscle, and bone. The concentration of estrogens has been shown to be as much as twenty-fold higher in breast cancer tissues than in the circulating plasma, suggesting locally increased aromatase activity near or within the cancerous tissues.

A study published 1999, found that in approximately 30 percent of the subject population, leptin was able to stimulate aromatase activity in adipose stromal cells at high concentrations. The researchers suggest that the elevated levels of aromatase activity may contribute to increase circulating estrogen levels in certain obese women and propose that elevated leptin concentrations in obese women may cause locally elevated estrogen concentrations in the breast and thereby promote tumor formation.

In a more recent study in 2013, researchers demonstrated that leptin signaling in the adipose tissues increases aromatase expression. Additionally their findings suggest that leptin and aromatase in the local tumor microenvironment play a crucial role in development and growth of hormone-dependent breast cancer. They conclude that

These findings provide a foundation to understanding the regulation of aromatase in adipose tissues in general and in the tumor microenvironment specifically and can provide a rationale for targeting the adipocyte leptin-aromatase axis in the prevention and/or treatment of hormone-dependent breast cancer. (My emphasis)

This association is so important, it is now known as the adipocyte leptin-aromatase axis.

Leptin levels have been found to correlate with the size of the tumor and body mass index – the more leptin, the larger the tumor. Additionally, women with higher leptin do more poorly than women with lower leptin levels.

Leptin seems to be involved in supporting cancer stem cells as researchers have found that higher levels of leptin also promotes higher survival of breast cancer stem cells. This is important for survival and growth of tumors. Leptin activates this change in metabolism that supports cancer cells.  Some researchers think leptin may actually be a cause of breast cancer.

Use of Aromatase Inhibitor in Breast Cancer

Inhibition of the aromatase enzyme has a significant effect in the development and progression of hormone-responsive breast cancers, due to the corresponding reduction of production of estrogen throughout the body. As such, aromatase inhibitors (AIs) can be, and have been utilized as either anticancer agents or for cancer chemoprevention.

However, the use of AIs for cancer chemotherapy or chemoprevention is limited to postmenopausal women or premenopausal women who have had their ovaries removed, as the production of estrogen from the ovaries will be counter productive to the therapy. There are also a wide range of natural aromatase inhibitors, some of which can be viewed on GreenMedInfo.com's aromatase inhibition research page.

Clearly, in order to control leptin, it is critical to reduce body mass to a normal weight. Overweight women have 3x a greater risk for breast cancer due to:

Get Adequate Hours of Sleep

Melatonin is a very potent anti-oxidant and immune activator. It is being use in breast cancer treatment (high dose) investigations. Melatonin levels at age 60 are 1/10 of what they were in your youth. Low melatonin is associated with breast cancer.

Timed Release melatonin is a great sleep aid and also acts as an anti-oxidant . Additionally, it is known to upregulate tumor suppressor genes.

The most natural way to increase melatonin levels is to get sunlight on your face. This stimulates the production of melatonin in the pineal gland. Practice this, using common sense so that you do not damage your eyes or get a sun burn.

The best way to test cortisol levels is with a saliva test, with 4 samples taken over a 24 hour period. Many alternative practitioners can perform this test for you.

Exposures to many toxicants from the environment, such as pesticide, herbicides, fungicides, BPA, phthalates, etc. Structurally they are all similar to estradiol and will affect the receptor.

These xenoestrogens either initiate or block receptors and when these toxicants bind, sometimes they bind. When naturally occurring hormones bind, they bind and go. Not only does this occur in the breast tissue, but xenoestrogens also affect other important receptors like the thyroid receptor, insulin, testosterone, etc.

Check out this post for natural methods of detoxification.

Some investigators are now saying there should be no alcohol consumption at all. Previous standards cited that two drinks a day or more increase risk of dying of breast cancer. Alcohol depletes glutathinone and oxytocin – potent anti-oxidants. Alcohol also increases angiogenesis.

This study suggests that binge drinking by women in their teens puts them at greater risk for breast cancer when they are older.

Early pregnancy reduces risk of breast cancer, possibly through increased levels of progesterone and estriol as well as final maturation of the breast which only occurs through a complete pregnancy.

Lactation reduces future breast cancer risk, probably through release of oxytocin. This hormone is thought to clear the duct of inflammatory debris and is inhibitory to cancer cells.

There is some evidence that breast cancer risk may begin in the womb from maternal exposures to xenoestrogens resulting in precancerous lesions that may be expressed in adulthood. These xenoestrogens can affect the developing embryonic breast tissue.

This is very scary today and for the future.

Currently many of us are in a state of chronic inflammation due to food choices, unprecedented levels of obesity as well as environmental toxins.

This is a great supplement for controlling insulin resistance. High circulating insulin feeds tumor cells. You need to get insulin under control and sometimes diet is just not enough.

If you have insulin resistance or diabetes you might want to register for the Reversing Diabetes Summit coming soon.

Nutrition and What You Can Do

Protect yourself from toxins with this product. This is a great product for women.

Informing yourself of current research findings and taking care of yourself through diet and other modalities can increase your odds of NOT getting breast cancer.

Dr. Jill Tieman is a Clinical Nutritionist/Chiropractor in Suffolk County, New York, with a  specialty in SCD (Specific Carbohydrate Diet) and GAPS (Gut and Psychology Syndrome) and Paleo diet, as well as Chapter Leader of the Great South Bay Chapter of the Weston Price Foundation. She is passionate about teaching people to heal themselves through real, nutrient dense and traditional foods. She blogs about food politics, cutting edge nutrition and real food at www.Realfoodforager.com.