The Buzz of Bee Pollen 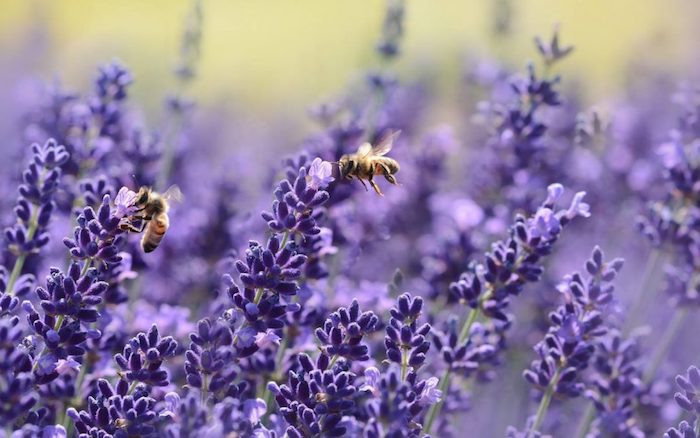 When you visit a smoothie shop, juice bar, or similar healthy venues, you typically have a range of options to add to your drink to enhance the health benefits. A common one with centuries of traditional use as a health-boosting product is bee pollen

Is there evidence to back up this use? The short answer is yes; however, there are some specifics one should know first.

Bee pollen originates from plants, so it is natural that it will contain some of the healthy components of the plant itself. As with honey, the composition of bee pollen is highly dependent upon the plant it comes from. To create bee pollen, the pollen from the plants is mixed with nectar and/or the saliva from the bees as it makes the trip back to the beehive. Once in the hive, it becomes fuel, so it has to be nutrient-rich, and this composition lends it to being a beneficial health food for (most) humans as well as bees.

It contains carbohydrates, protein, and lipids, as well as important micronutrients including minerals and vitamins. Roughly 32.8 percent of dried pollen is protein, and it contains all the essential amino acids and is a rich source of the B-complex vitamins. Additionally, it has several key phytonutrients, including polyphenols and carotenoids, all of which might seem to work together to promote health and well being.

One of the main reasons bee pollen provides so many health benefits is because of its rich polyphenol and antioxidant content. Although reactive oxygen species play a role in several important biological processes, many diseases are associated with excess oxidative stress. The rich polyphenol content, including flavonoids, quercetin, and phenolic acids, in bee pollen provides it with a high number of antioxidants to protect against the damage of too many free radicals, ultimately assisting in protection against oxidative stress-related diseases.

However, the antioxidant properties are not due just to the polyphenols. In a study reviewing 12 different types of bee pollen, the researchers found the polyphenol content varied considerably depending on the plant source. This variation correlated with a difference in antioxidant capacity in several species, but not in all. The researchers hypothesized that there is a synergistic effect between the polyphenols, enzymes, and other properties that mitigate the free radicals, which explains why all the bee pollens tested exhibited a high antioxidant capacity.

Another study found that bee pollen helped lessen the free radical damage caused by a common chemotherapy drug (cisplatin) in mice. Taking cisplatin is associated with reduced antioxidant capacity, including lowered glutathione levels, an important antioxidant. For two weeks, researchers gave mice 140 mg per kilogram of body weight per day of water extracts of Egyptian bee pollen. This amount would correlate to roughly 2.5 teaspoons per day for a 165-pound person. They compared this to those taking 8.4 mg/kg body weight per day of propolis, another beneficial compound from bees, and a group taking the drug by itself. They found that consuming the bee products greatly reduced the toxic effects of the medicine, thanks to the antioxidant activity reducing lipid peroxidation and increasing the concentration of glutathione. Bee pollen appeared to have a more potent effect than propolis, especially in testicular cells. Another study on rats found similar protective effects against the damage caused by propoxur, an insecticide known to cause issues. That said, it is essential to discuss with your healthcare practitioner before taking bee pollen supplementally if you are on any pharmaceuticals, as there can be interactions.

Another way bee pollen helps mitigate damage to cells is by supporting the proteasome, which plays a role in the turnover of proteins, both as part of normal cellular turnover and damage control. Oxidative stress triggers the proteasome to degrade proteins, which is an important part of regular cellular turnover for homeostasis and health. Excessive oxidative stress leads to damage to the proteins and cells, requiring additional proteasome activity. A study on Greek bee pollen found it stimulated the activation of this proteasome, which helped expand the lifespan of the cells.

Like honey and other bee products, bee pollen presents antimicrobial properties. In one study, researchers reviewed eight commercial varieties of bee pollen, each one from different plant origins. All samples demonstrated antimicrobial properties. The bacteria on which bee pollen had its most effective results were strains of S. aureus, which are associated with common respiratory diseases. Compared with the other pathogens, bacteria were most susceptible to the inhibitive properties of bee pollen. Typically, gram-positive bacteria tend to be more receptive to the inhibitory effects than gram-negative bacteria.

Researchers postulate that the reason gram-negative bacteria are more susceptible to the action of the bee pollen is that they have more lipids and a polysaccharide compound in their cell walls. There might be a connection between the phenolic characteristics of the bee pollen and its antibacterial properties. However, in one study, the bee pollen that was most effective actually had lower levels of phenols. In this study, bee pollen also demonstrated some antifungal behavior, depending on the source of the pollen. Bee pollen has also been shown effective as an antiviral agent in vitro, including against strains of influenza.

Pollen is well known for inciting incidents of hay fever in those susceptible to allergies. However, intake of small quantities of bee pollen might actually help reduce symptoms of allergies. One study found that bee pollen might provide benefits through working on mast cells, which are associated with allergies. When mast cells undergo degranulation, they secrete the histamine that triggers the allergic reactions. Researchers looked both in vivo and in vitro at the effect of bee pollen on mast cells. In mice, consuming bee pollen on a daily basis reduced the activation of mast cells upon meeting with IgE and other antibodies.

In vitro, bee pollen also reduced the degranulation of the mast cells and tumor necrosis factor-alpha production, which is an inflammatory response. It appeared to do so through inhibiting the binding of IgE antibodies onto certain receptors of the mast cells, especially Fc epsilon RI, which also contributes to allergic reactions.

Another study found a similar response to another type of cell that plays a role in allergy response: basophils. Upon coming in contact with an allergy, consumption of bee pollen inhibited the degranulation of basophils, which was assessed by looking at the levels of beta-hexosaminidase. This reaction occurred in a similar manner: impacting the IgE antibodies to bind to Fc epsilon RI. The researchers hypothesized that it is due to the polyphenols in the bee pollen binding to these potential allergens, thereby rendering them ineffective. Additionally, the fatty acids within the compounds also help mitigate the release of inflammatory responses to allergens. Bee pollen also contains two polyphenols known for helping with allergies--quercetin and kaempferol--which also inhibit the degranulation of mast cells and basophils.

Although bee pollen is promising in helping reduce the severity and incidence of common pollen allergies, care should be taken by those with severe allergic responses to pollen, bees, or bee products, especially if there has been a history of anaphylactic shock. In rare instances, some individuals have severe allergic reactions to consuming bee pollen.

The antioxidant properties of bee pollen help in the fight against cancer through preventing and/or blunting some of the oxidative stress damage associated with cancer. However, this is not the only cancer-fighting property of bee pollen. One study found that the polysaccharides from bee pollen extracted from Rosa rugosa exhibited anti-proliferative activity in colon cancer cells in vitro. The researchers found that within a 72-hour period of treating the cells with the extracted polysaccharides, there was a significant inhibition of the growth of the tumor cells that was dose-dependent. Although each further breakdown of the bee pollen continued to show some action, it was best with the synergetic effect of all of the polysaccharides.

This is just a start to the health benefits provided by bee pollen. Studies have also found it to be protective to the liver, anti-inflammatory, and beneficial for treating anemia. So, how do you take advantage of all these health benefits? First, check with your healthcare practitioner as to whether it would be a good fit for you. Second, if it seems to be, you may want to start slowly by trying a local bee pollen and sprinkling it in yogurt, adding it to a smoothie, or incorporating into salads.

Find out what the buzz about Bee Pollen is all about in the GreenMedInfo database on the subject. 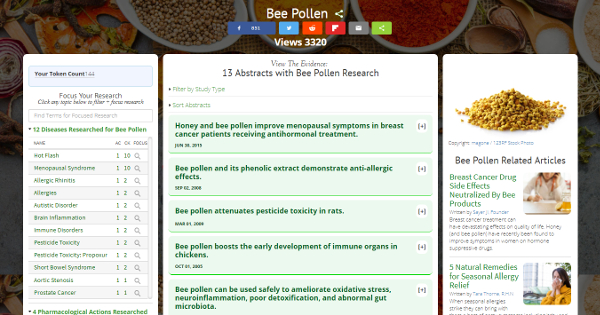