Can Erectile Dysfunction Be Resolved Naturally 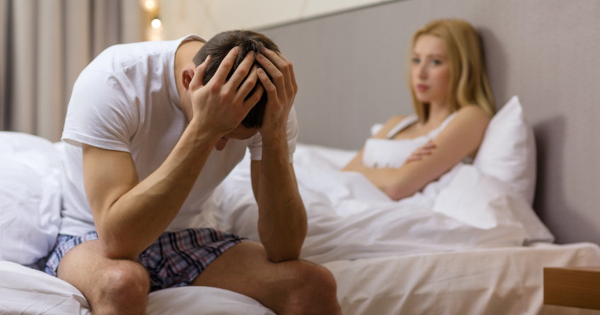 Not feeling as ready to perform, sexually, as you used to? Don't worry -- there's more to getting a strong erection than a "little blue pill." Try these top natural substances to restore your erections, drug-free

Erectile dysfunction (ED) is the inability to get and/or sustain an erection. Also referred to as impotence, ED can hinder satisfying sexual activity and may prevent you from engaging in sexual intercourse. Men who suffer from ED can experience depression, loss of self-esteem and relationship difficulties, among other negative impacts. ED may be a sign of one or more serious health problems and should be discussed, even if you find it embarrassing, with your medical and therapeutic providers.

While ED is common, affecting approximately 30 million men in the U.S., it is not considered a normal part of aging.[i] ED is mostly diagnosed in men with one or more of the following characteristics:

Treating erectile dysfunction is not a one-size-fits-all approach. Depending on the underlying cause, which may be emotional, physical, relational or a combination of factors, treatment must be personalized to be successful, long-term. Some of the conventional approaches to treating ED include oral prescription medications such as sildenafil (commonly known as Viagra), tadalafil, avanafil and vardenafil, marketed under different trade names, which function by stimulating blood flow to the penis.

Testosterone replacement therapy (TRT) may be prescribed if levels of this hormone are low, and addressing underlying conditions like high blood pressure and blood sugar imbalance may be effective at addressing the root causes of ED.

ED can be a common side effect of some antidepressants, blood pressure medications, sedatives and a long list of other drugs.[iii] If you suspect your ED may be linked to a prescribed medication, this should be discussed with your doctor as part of the full spectrum of maintaining your health.

If you'd like to try natural methods for restoring a healthy sexual response, there is abundant science to support your inclination. ED is known to be associated with overall health, so lifestyle modifications are often effective at improving ED as well as slowing the decline of penile function as you age.[iv] If you smoke, consider stopping. One year of smoking cessation is associated with a 25% improvement in erection quality.[v]

Overweight? It's probably not helping your ED. Studies show that men of normal weight experience 50% less ED than obese men.[vi] As part of a health-centric lifestyle, strategic supplementation may help restore your natural vitality. We've compiled a list of top natural substances that are known to support your body and are scientifically validated for enhancing erections and improving sexual health in men with ED.

Arginine, or l-arginine, is an essential amino acid found in food and a building block of protein. Abundant in red meat, poultry, fish and dairy products, arginine helps heal wounds, regulate hormones and condition the arteries, among other critical functions. When used supplementally, arginine may help you achieve firmer erections that last longer and may improve your overall sexual function.

A study of men with organic erectile dysfunction receiving 5 grams orally per day of l-arginine found that 31% of patients reported a significant improvement in sexual function after six weeks of dosing, compared to control subjects.[vii]

A deeper meta-analysis of the therapeutic potential of arginine for ED analyzed studies published up to April 2018 from multiple databases. The analysis showed that arginine supplementation with doses ranging from 1,500 to 5,000 milligrams (mg) daily significantly improved ED compared with placebo or no treatment.[viii] Arginine supplementation also caused significant improvements in overall sexual satisfaction, intercourse satisfaction, orgasmic function and erectile function compared to controls.[ix]

Commonly referred to as pine bark extract, pycnogenol is a dietary supplement that has been studied primarily for its antioxidant and anti-inflammatory properties.[x] Derived from the bark of the French maritime pine tree, this potent healing aid has shown promise for an array of conditions, including erectile dysfunction.

A 2019 study on pycnogenol extract for ED found that study patients with diabetes experienced a 45% improvement in ED, whereas the nondiabetes group showed a 22% improvement in ED symptoms after three months of intervention.[xi] The pine bark extract also lowered total- and LDL cholesterol by 20% and glycaemia by 22% in the diabetes group.[xii]

When pycnogenol was used in combination with l-arginine in a randomized, double-blind, placebo-controlled study, patients with moderate ED experienced statistically significant improvements in ED and a significant increase in testosterone levels after three to six months of continuous therapy.[xiii] There was even evidence suggesting that benefits increase the longer the therapy is used.[xiv]

Saffron has long been the most prized and costly spice, in part due to the near-mythical properties it is rumored to possess. Anecdotally, saffron is thought to aid beauty and enhance sensual feelings as a potent aphrodisiac. Science has weighed-in heavily on this spice, with studies attributing analgesic, anti-inflammatory and antidepressant properties, as well as chemopreventive effects against cancer.[xv] There is even documented science on saffron's positive effect on sexual function in patients with ED.

A 2009 study published in the journal Phytomedicine followed 20 male patients with ED for 10 days during which they dosed with 200 mg of saffron daily. Compared to measurements at baseline, both the base and tip of the penis showed statistically significant improvements in rigidity and tumescence.[xvi] Self-reported erectile function scores were significantly higher in patients after saffron treatment, with patients experiencing increases in number and duration of erectile events, despite taking the supplement for only 10 days.[xvii]

Folate is the natural form of vitamin B9, while folic acid is its synthetic form. Vitamin B9 is important for the formation of healthy red blood cells, and you can't have a strong erection without healthy blood flow, right? Found in dark green leafy vegetables, beans, nuts and some fruits, a diet lacking in sufficient folate can lead to deficiency, which is associated with a host of health problems, including ED.

The association between serum folic acid level and erectile function is reinforced by other studies, including a 2015 study on 120 patients with severe, moderate or mild ED. Separated into groups based on severity of dysfunction, with a control group without ED, testosterone, cholesterol and FA levels were measured.

The mean FA concentration was significantly higher in the control group than either the moderate or severe ED group, but not the mild ED group, suggesting that folic acid levels in the blood may correlate to severity of erectile dysfunction.[xx]

Herbal remedies labelled "ginseng" may be derived from any of several plants, but when it comes to male sexual health, Panax ginseng is the holy grail of stimulating roots. Also called Asian or Korean ginseng, Panax ginseng has been part of the herbal pharmacopeia for millennia. Modern science has isolated ginsenosides as an active plant compound responsible for ginseng's potent pharmacological effects, one of which is enhancing the male erection.

A 2009 study from Korea followed 143 men with ED, assigning one group to receive 1,000 mg of ginseng extract twice per day, and one group to receive the same amount of a placebo. After eight weeks, 86 patients had completed the full study, including assessing erectile function scores across five parameters, both at the beginning and at the end of treatment.

It's important to prioritize a healthy lifestyle if you want to maintain a vigorous sexual response, including as you age. Avoid toxins and chemicals by controlling your environment whenever possible. Workplace exposure to one of the worst toxic offenders in the world, bisphenol-A (BPA), used in plastics and many other products, was linked to decreased overall male sexual function and satisfaction in a 2010 study.[xxiii]

For those toxins that you can't avoid, exercise can help you sweat them out. A good workout not only stimulates those "feel good" endorphins, it helps increase blood flow throughout your body, including to the penis. If you're just starting out, aim for at least 30 minutes of moderate activity most days of the week. If you're already physically active, consider adding more intense activity to your regimen one or two days each week.

For some men, ED is less about the need to do more, and more about the need for less -- namely, less pressure and stress. If you're overburdened, consider integrating soothing activities like yoga or tai chi into your routine, or getting regular massages. Switch up one or two days a week of pounding weights at the gym for long walks in nature, preferably by the shore or deep into the woods, any place you can unplug from the hectic pace of life and its nonstop demands.

Finally, consider whether the drugs you are taking are truly enhancing your health, especially if you can work with your doctor to eliminate them through healthy lifestyle modifications and smart supplementation. To learn more about erectile dysfunction, consult GreenMedInfo.com, the world's most widely referenced, evidence-based natural medical resource.