Can Ginger Beat Out The Multi-Billion Dollar Acid Blockers? 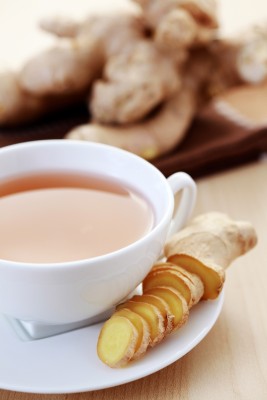 Did you know that the multi-billion drug category known as "acid blockers," despite being used by millions around the world daily, may not work as well as the humble ginger plant in relieving symptoms of indigestion and heartburn?

Ginger is a spice, a food, and has been used as a medicine safely for millennia by a wide range of world cultures. Research on the health benefits of ginger is simply staggering in its depth and breadth. In fact, the health benefits of ginger have been studied extensively for over 100 health conditions or symptoms, making it one of the world's most versatile, evidence-based remedies.

The biomedical literature on acid blockers, on the other hand, is rife with examples of the many adverse health effects that come with blocking stomach acid production with xenobiotic, patented drugs, i.e. proton pump inhibitors and H2 antagonists. What started out as "heartburn" – which in its chronic form is now called "acid reflux" or "gastroesophageal reflux disorder" – soon becomes stomach acid barrier dysfunction, when these drugs remove the acid which protects us from infection, helps to break down food, and facilitate the absorption of minerals and nutrients.

The list of 30+ harms is extensive, but here are a few of the most well-established adverse effects you may not be aware of:

Back to our friend – our "plant ally" – ginger.  What happens when Pharma meets Farm in a biomedical face-off? When acid-blocking drugs are compared in efficacy to our little spicy ginger root? Well, this is what the journal Molecular Research and Food Nutrition found back in 2007 ...

But, this was not all. Ginger was also found to have potent antioxidant properties, protecting both lipids from peroxidation (rancidity) and DNA damage, leading the researchers to conclude that specific fractions within ginger have "potential in-expensive multistep blockers against ulcer."

Also, whereas drugs which interfere and/or remove the stomach acid barrier also deactivate acid-dependent protein-digesting (proteolytic enzymes) such as pancreatic protease, and increases the risk of infection as a result of the loss of the anti-infective effects of the stomach's acid, ginger actually has an exactly opposite set of benefits: it contains a proteolytic enzyme several hundred times more potent than the one found in papaya (papain) and has broad-spectrum antibacterial, antiviral and antiparasitic properties, to name but only a few of its 40+ distinct pharmacological actions.

While this study focused on specific isolates of the whole ginger plant, it must be remembered that whole plants are not drugs, nor should be reduced to "nutraceutical" magic-bullets in order to become new palliative drug alternatives, which is to say, symptom-repressors, leaving the real healing job of changing the underlying nutritional, environmental, emotional context to lead to the problem in the first place, unchanged.

While taking a ginger pill is usually a better choice than a chemical one, for most folks, ginger should be consumed in whole forms, in moderate and balanced quantities, along with a nourishing, organic, whole-food and traditional foods diet, in order to move beyond the paradigm of popping pills, or proprietary fractions of herbs in order to balance out the pendulum of extremes.

Either way, I think its time with awaken from the sorcery-like spell of pharmacia (Greek word meaning: drug, potion, charm, spell, poison), and realize everything we already need is likely in our backyard, our refrigerators or cupboards – if not altogether within ourselves.