Licorice Shown to Kill SARS and Other Lethal Viruses 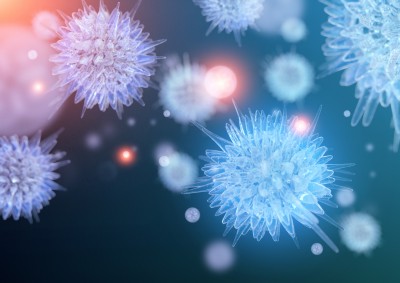 Licorice has a rich and ancient history of use as a medicine, being rooted in Indian, Chinese, Greek and Egyptian traditions, alike. Technically a legume, related to beans and peas, its sweetness results from the presence of glycyrrhizin, a compound 30-50 times sweeter than sugar. This compound is what gave licorice its name, which derives from the Greek word γλυκύρριζα (glukurrhiza), meaning "sweet" (gluku) "root" (rrhiza). But glycyrrhizin's properties don't end with its sweetness; it is also one of the most powerful antiviral compounds ever studied.

A study on glycyrrhizin's inhibitory activity against SARS-associated coronovirus published in Lancet in June of 2003, received little mainstream media coverage, despite its profound importance to human health. Mind you, only a few months before this the World Health Organization issued a press release (April 16, 2003) stating the recent outbreak of lethal Sudden Acute Respiratory Syndrome (SARS) in Asia was caused by the same coronoviruses used in this study. With the world still reeling from global SARS hysteria and "preparedness," i.e. stockpiling pharmaceuticals like Ribavirin despite their well-known lack of effectiveness, you would think more attention would have been paid to promising research of this kind...

In the groundbreaking Lancet study, titled "Glycyrrhizin, an active component of liquorice roots, and replication of SARS-associated coronavirus," German researchers summarized their intention in the following manner:

"The [recent] outbreak of SARS warrants the search for antiviral compounds to treat the disease. At present time, no specific treatment has been identified for SARS-associated coronavirus infection."

And here is what they found:

We assessed the antiviral potential of ribavirin, 6-azauridine, pyrazofurin, mycophenolic acid, and glycyrrhizin against two clinical isolates of coronavirus (FFM-1 and FFM-2) from patients with SARS admitted to the clinical centre of Frankfurt University, Germany. Of all the compounds, glycyrrhizin was the most active in inhibiting replication of the SARS-associated virus. Our findings suggest that glycyrrhizin should be assessed for treatment of SARS. [emphasis added]

Licorice's potent antiviral properties are not limited to SARS-associated coronaviruses, but have also been studied in connection with another epidemic/pandemic capable and potentially lethal virus: influenza.

In an animal study dating all the way back in 1997 and published in the journal Antibacterial Agents and Chemotherapy, titled: "Glycyrrhizin, an active component of licorice roots, reduces morbidity and mortality of mice infected with lethal doses of influenza virus," researchers found that when mice were administered glycyrrhizin at 10mg/kg body weight (the equivalent of 680 mg for a 150lb adult), they all survived a series of ten 50% lethal injections. The control group, on the other hand, only survived an average of 10.5 days, with no survivors by day 21, the end of the experiment.

Even more remarkable, when the splenic T cells from the glycyrrhizin-treated mice were transferred to mice exposed to the same lethal doses of influenza virus, 100% survived, compared to 0% for the control mice inoculated with naive T cells or splenic B cells and macrophages from glycyrrhizin-treated mice. The researchers discovered that glycyrrhizin's powerful, life-sparing effects against lethal doses of influenza were a result of the compound increasing interferon gamma production by T cells.

In order to fully understand these findings, we must look at the question of safety first. Licorice is still commonly perceived as a "dangerous herb," due to its ability to stimulate blood pressure elevations in susceptible individuals when consumed excessively; but considering the relatively higher toxicity of most drugs, this perception must be taken with a grain of sea salt. On the other hand, it is important to exercise caution when using licorice, or any herb, for medicinal purposes, and ideally obtaining the assistance of a medical herbalist who can work with conventional health practitioners, whenever possible.

In the United States glycyrrhizin is still classified as "Generally Recognized As Safe," when used as a flavoring agent, but not as a sweetener. It has also been removed from most "licorice" candies, substituted with with the similarly-tasting but taxonomically unrelated anise. In the European Union the recommendation is for people to consume no more than 100 mg a day, which is the equivalent of 50 grams of licorice sweets, and in Japan, where glycyrrhizin is often used as a sugar substitute, a recommended limit is set at 200 mg a day. This should give you a sense for what a commonly considered safe, daily dose is, and puts a 600 mg "therapeutic" dose in perspective.

Also, it is important to consider that even when the glycyrrhizin is isolated and concentrated pharmaceutically, its relative toxicity is extraordinarily low, when compared to antiviral drugs like Ribavirin.

According to the federally mandated Material Safety Data Sheets (MSDS) provided by the manufacturers on pharmaceutically extracted glycyrrhizin and the drug Ribavirin, the former is 30 times less toxic than the later (the mouse oral 50% lethal dose is 9818 mg/kg versus 300 mg/kg for Ribavirin). It is important to understand, also, that when complexed in the whole root or powdered root form, glycyrrhizin will be treated differently by the body. It will be released slower, will have naturally occurring factors which may attenuate adverse effects, and therefore should be considered safer than the MSDS on isolated glycyrrhizin reflects.

Also consider that glycyrrhizin is much cheaper...

A 200 mg dose of Ribavirin from an online discount pharmacy costs approximately 4 dollars.

Let's take a 1 pound bag of Frontier brand Licorice sticks, which costs $10, and which contains approximately 7% glycyrrhizin or the equivalent of 13,440 milligrams of glycyrrhizin per pound. This is also the equivalent of sixty-seven 200 mg servings. If I bought sixty-seven 200mg pills of Ribavirin it would cost me 268 dollars. So, that's 26.8 times the price of the glycyrrhizin found in licorice. In both cases, the natural compound is approximately 30 times less toxic and less expensive, and let us not forget, in the SARS/licorice study, Ribavirin didn't even work. So, it is potentially infinitely more effective. Hmmm. I wonder which I would choose if faced with an impending pandemic virus? A drug with low availability, exceedingly high costs and toxicity, and which doesn't work, versus a time-tested, safe, affordable and highly effective herb?

The reason, of course, why licorice will never be used as an FDA-approved medicine is because it would take at least 800 million dollars of upfront capital to fund the preclinical and human clinical studies necessary to get it to that point.

In the meantime, I encourage everyone to immerse themselves in the first-hand research itself, which we have both lovingly and painstakingly gathered on your behalf. Make sure to visit our live reference page on Licorice to view all our valuable research. 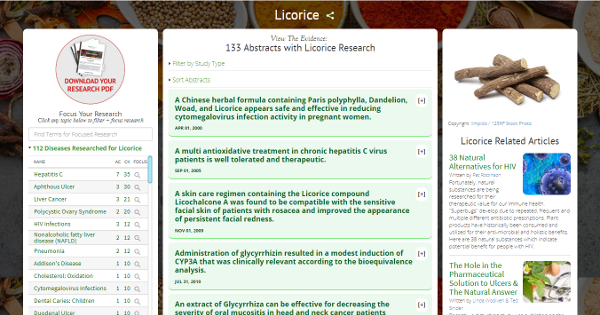