Can The Slow Food Movement Cure The Fast Food Nation?

Views 4948
Posted on:
Thursday, June 21st 2012 at 5:00 pm
Written By:
Tania Melkonian
This article is copyrighted by GreenMedInfo LLC, 2012
Visit our Re-post guidelines 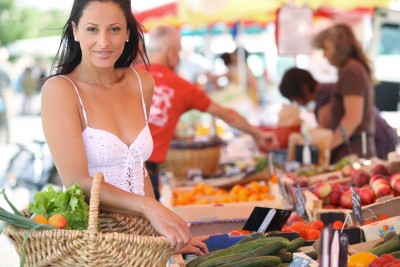 Food Should Be Good, Clean, and Fair...

I was young, exceedingly light on Euros and on my first trip to Italy.   Despite my financial challenges, I had friends in high places.  When you’re traveling  'low end’ that  means  friends who are locals.   In that regard,  I was abundant.  As the boat sped around the bay of Camoglie, I considered my good fortune.  Here I was on a de-facto culinary journey lead by my Italian friends and  peppered with the substructure of a movement that a few years later,  would  explode internationally.

Carlo Petrini, founder of the Slow Food Movement believes, "…everyone has the right to good, clean and fair food". 1 Its mission of educating and providing foundation for universal access to good, clean and fair food has been the movement’s banner since its original incarnation in the late 1980s as a committee (under a different name) protesting the opening of McDonald’s near the Spanish Steps.  Since then, the organization has grown into a 100,000 member movement with chapters (convivia) in over 150 countries.2

Good food refers to high quality, delicious food.  Clean food refers to the way it is produced and transported and fair, to the pricing and treatment  from both the consumers’ and the producers’ point of view.  At the time of my trip, it had yet to be imagined: uniting the pleasure of food with commitments to sustainability and community.

The ground work, however,  was being laid for the international exportation of this vision that was organic to the Italian and other Mediterranean cultures. The table was being set - literally.  The spray from the wake brought me back to the moment and the boat turned the corner into the cape of Portofino, revealing the beautiful San Fruttuoso Abbey.  I arrived at one of the most scenic outdoor dining rooms imaginable and one accessible only by boat or via arduous walking trail.  Today,  dotted with a few restaurants, the beachfront stood - in that moment- empty and pristine but for a long communal table.

Around it were my friends - my guides - on what was to become one of my most vivid and treasured memories of a full food experience.  In progress,  were discussions  - as there always are in the company of Italians - of food. Italians can be relied on to hold nothing back with regards to critique of their cuisine. It was rare to hear immediate agreement on who makes the best foccaccio al formaggio  without significant requisite hand waving and finger wagging preceding it.  No one’s angry.  It’s just that  the subject spurs such passion.  And shouldn’t it?

Had I not heard the accolades that came before it arrived at the table, I would not have believed that  something so simple could be so sublime.  Pesto lasagne: noodles and pesto.  That’s all.  It seemed so modest and homey and yet so elegant.  This is the beauty of Mediterranean cuisine:  Everyone eats well because everyone believes it is his right and not a privilege of the wealthy or the well-travelled.

This same  idea of the universal right to eat well was the anchor of the Slow Food Movement and one we - across the Atlantic -  would so desperately need  just a few years later.  When commercial agribusiness turned our food supply on its end, the Slow Food movement responded by providing - through its 800 convivia - education for consumers on taste and also on the risks of fast food and factory farms.  Paul DeCampo, former President of Slow Food Convivium in Toronto, Canada says, "Slow Food's focus on celebrating a uniquely local gastronomy resonated with area farmers, chefs and conscious eaters, and Slow Food advocates' clear preferences for traditional genetics, organic production and fair returns to farmers have clarified the mission of local food activists".  Moreover, the medicinal and health properties of the good, clean, fair food were re-illuminated.  There is an anthropological pull to find certain foods and certain combinations of food delicious .3

It is not a coincidence but rather a scientifically proven pull that happens to be intuitive to Italian and other cultures.  However it seems less and less available to all now and particularly to us in North America.  Cultures of the Mediterranean preserve agricultural heritage by protecting the handing down of recipes and with impromptu discussions on where to get the best ribollita and whose mother turns out the tastiest pepperonata.  We have lost that primal connection to food,  however.  Our palates have been irritated with powdered drinks promising slenderness and a perpetual stream of food that can be conveniently eaten with one hand while we text, drive or open the microwave door with the other.  We needed a code; something that would force the consideration of food as art, fuel, connection and ecology all at once.

The International Slow Food Movement provided such a code.  It established the Ark of Taste4, a system to archive and protect endangered ingredients indigenous to particular areas.  The list has grown to include over 1000 food items from over fifty countries.  One of the 1000 items on the list today is the Vessalico garlic from the region of Liguria that made the pesto that day so particular, so memorable.  Good, clean, fair.   Florida Cracker beef is also on the list on the US’s ark.  Jersey Black butter - a kind of apple preserve - is on the UK’s list in the company of the Bunya nut (Australia) and the nodding onion (Canada).   The mission of the Ark of Taste  is to celebrate these ingredients, discuss them, source them and use them....or lose them.

Perhaps, today, fast food would be slow food. We might be enjoying sit down meals of ethically sourced, delicious food now- as a right- if things had gone a different route; if the fork in the road lead to the fork and the plate and not the to-go bag.  If long ago, McDonald’s had taken a different path, today we would be eating - not unremarkable Quarter Pounders and Filet-O-Fish - but rather magnificent McFlorida Cracker Burgers.

Back to the stupendous pesto lasagne.  Pesto can be roughly translated from the Genovese dialect to mean 'pounded’.  What we recognize in North America as pesto is actually the original Genovese pesto.  It is made - simply - of basil, garlic, pine nuts, olive oil and finished with a sharp, regional cheese.  Vasselico garlic may be hard to come by.  However, considering that pesto has become more commonly jarred or squeezed from a tube, it seems doing it justice would involve nothing more than simply collecting the best version of four (or five) ingredients you can find: Basil, garlic, pine nuts, olive oil (cheese).  No tubs, no dehydrated cubes, no powder.  Just pound. 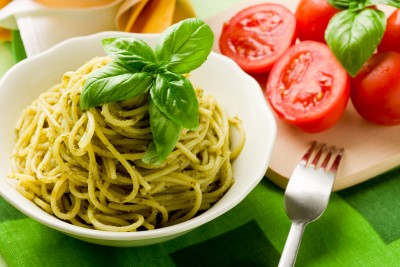 In this series, I offer recipes that you can name yourself.  Amend them to suit your dietary predilections and enjoy.  I do urge you to preserve the essence of the recipe, however, and promise that doing so will augment the deliciousness... a lot.

A list of things to pound into a versatile sauce, spread, crust or garnish

These amounts will make 2 servings of loose pesto.  1 bunch/handful of basil (or parsley or kale or arugula or mizuna, garlic scapes.....or any green leafy stuff you like) boil 1 quart of water and dip your greens in for a few seconds and remove, transferring them to a bowl full of cold water and ice.  Remove from that bowl now and place on a paper towel or tea towel to dry.  Separate leaves from stalks (which can be frozen now that they have been blanched and used to make stock later) Add leaves to a handful of pine nuts (or walnuts, or almonds or pistachios or cashews) and 1/2 bulb of garlic that you or a friend minced.  If you have a mortar and pestle, begin pounding.  Alternatively, process in a food processor (in this case do the nuts first, then add greens and garlic).  Add in olive oil until you get the consistency you need (pasta sauce = more oil, sandwich spread = less oil) and finish with a finely grated sharp cheese (Parmegianno, Asiago... )

The crucial process is the choosing of the ingredients.  There are only a few so take time to ask about each one:  Is it good (don’t compromise on taste)?  Is it clean? (GMO, pesticides, local?)   Is it fair? (Are you selling your soul to eat this?  Did someone make  40 cents an hour to procure this from the fields?)  There are only two steps.  So do them both mindfully: 1.  Choose and 2. Pound