Views 8417
Posted on:
Saturday, February 4th 2017 at 2:30 am
Written By:
Margie King, Health Coach
This article is copyrighted by GreenMedInfo LLC, 2019
Visit our Re-post guidelines 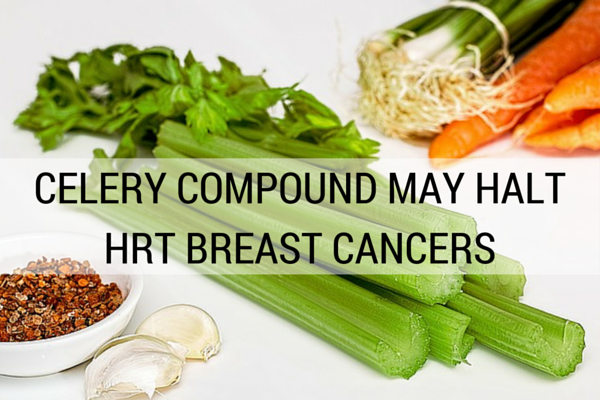 More than 100 women in the U.S. die every day from breast cancer. Could something as simple as celery make a difference?

Postmenopausal women who have taken synthetic hormone replacement therapy (HRT) are at increased risk of developing breast cancer. More than 100 women die every day from breast cancer in the U.S. alone.

Researchers from the University of Missouri now believe that luteolin, a natural compound found in celery and other foods could reduce that risk. [i]

Their study published in the journal Springer Plus found that luteolin was protective against breast tumors that are accelerated by progestin, a synthetic form of the natural hormone progesterone.

Progestin is typically given to women taking HRT to prevent endometrial cancer. But the famous Women's Health Initiative study established that women on synthetic HRT had significantly higher rates of breast cancer, heart disease, stroke, and blood clots in their veins and lungs.

The study resulted in decreased use of synthetic HRT. Since then researchers have seen breast cancer rates drop by 7% as the use of progestin fell out of favor. Even so, an estimated 1.6 million women still take HRT with synthetic progestin to relieve menopause symptoms.

The researchers found that luteolin reduced angiogenesis, i.e. it reduced the blood vessels that feed breast cancer cells. It also increased the rate of apoptosis or programmed cell death of the cells.

One of the authors explained that most older women normally have benign lesions in their breast tissue. But these lesions don't form tumors until they receive a trigger - e.g. progestin - that attracts blood vessels to feed the lesions. Their study showed "evidence that luteolin has the potential to disrupt angiogenesis and thereby prevent the growth development of progestin-driven tumors."

The researchers are now looking at whether luteolin injections might be used to treat progestin-dependent breast cancer. In the meantime, they encouraged women to continue eating a healthy diet of fresh fruits and vegetables that contain luteolin.

Luteolin is a flavonoid found in more than 300 plant species. It's a potent antioxidant. It's been shown to neutralize free radicals and reduce inflammation. It also promotes nerve and muscle function.

Besides breast cancer, luteolin has been found effective against leukemia, thyroid, lung, and prostate cancer cells. It has been cited as a potential drug to treat colorectal cancer.

Other good sources include artichokes, peppers, olive oil, celeriac, and lemons. You can also get luteolin from spinach, rutabagas, kohlrabi, kale, broccoli, Brussels sprouts, and beets.