Views 33070
Posted on:
Sunday, January 20th 2019 at 4:30 pm
Written By:
GMI Reporter
This article is copyrighted by GreenMedInfo LLC, 2019
Visit our Re-post guidelines 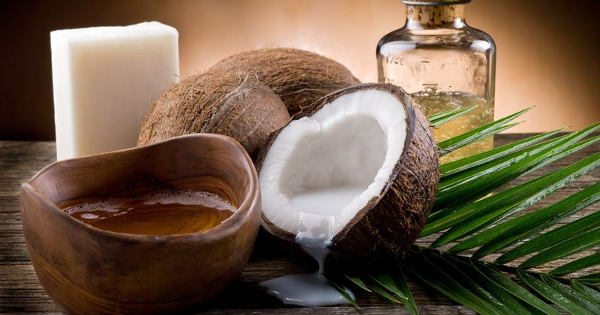 If you’re experiencing deteriorating vision as you age and don’t want to believe that it’s an unavoidable reality, the results of a recent study on macular degeneration will give you good reasons to get wide-eyed: coconut oil can now add “retina protection” to its long list of health benefits

There is a common age-related eye disease affecting more Americans than cataracts and glaucoma combined, yet few have heard of it unless they or someone they know has received a diagnosis. Age-related macular degeneration, or AMD, is the leading cause of vision loss in the United States affecting more than 10 million people nationwide.[1] Why is it such a mystery, and more importantly, what can we do to protect our eyes from this devastating (and believed incurable) condition?

When modern medical understanding is eclipsed by what is unknown, health conditions receive labels like “incurable,” with root causes “unknown” or attributed to “normal” aging. AMD is such a condition, making it difficult to find consensus on why some people get it, yet others do not, and how best to treat or prevent a diagnosis. While this can be frustrating, especially for those experiencing unexplained vision loss, it also means that one’s prognosis is not written in stone. As nutritional science has already proven, incurable conditions can often be overcome when healthy cell regeneration is stimulated through proper diet and supplementation.

AMD is diagnosed when the macula, a small oval area in the center of the retina, begins to deteriorate. The condition can be dry or wet, with dry AMD being the most common and least severe. Dry AMD occurs when druse (plural drusen), small, yellow-white fatty deposits that form under the retina, begin to cluster in the center of the eye, creating a spotty effect in the central field of vision. There is debate about whether drusen causes AMD or is merely correlated, as the presence of some drusen in the eye can be considered normal for the aging eye and does not always cause vision loss. It is clear however, that large deposits of “soft drusen” are correlated to a high risk of developing dry AMD.

Drusen are believed to be debris from tissue breakdown in the eye that occurs when normal, healthy cell turnover decreases. The condition worsens over time as these deposits accumulate and can lead to severe vision loss associated with late-stage geographic atrophy (GA) — gradual degradation of retinal cells.[2] Wet AMD is less common but associated with more severe vision loss. Wet AMD always starts with dry AMD. Maintaining a healthy macula is important, as this part of the eye affects our ability to read, recognize faces, and perform tasks such as driving or using a computer which require us to see fine details.[3]

While the American Macular Degeneration Foundation states that AMD most often affects those who are 55 years of age and older, information is scant about what causes the condition. Genetic factors and the environment— catch-all causes for most diseases, per the AMA— are speculatively associated with AMD, as is cigarette smoking. There are no FDA-approved treatments at this time, and the condition is considered an incurable epidemic-in-the-making as the Boomer generation advances in age.[4]

Researchers in the Department of Physiology at University of Ilorin’s College of Health Sciences in Nigeria conducted an animal study on macular degeneration to identify a nutrition-based protocol for staving off this growing threat to eye-health. Besides aging, damage to the macula can be induced by exposure to bright lights, a problem that is exacerbated by our near-continuous exposure to blue light-emitting screens. Researchers chose light exposure as the stimulus in this study since light selectively affects the eyes without causing degeneration in other parts of the brain. The study results, published in the journal PathoPsychology in October 2017, are truly a ray of light in the pursuit of non-pharmaceutical protections for these sensitive visual-sense doors.

Inspired by a 1966 study in which scientists, Noell et al, discovered that the retinas of albino rats became irreversibly damaged when continuously exposed to ambient light in the natural light spectrum,[5] researchers at the University of Ilorin explored the use of cocos nucifera oil (CNO) derived from dried coconut fruit. CNO has been shown to possess many therapeutic properties including analgesic or pain-relieving effects, anti-inflammatory action, antimicrobial benefits, and pronounced antioxidant effects. Oxidative stress is known to be involved in vision-threatening diseases such as AMD, as well as light-induced retina degeneration.

This link between oxidative stress and AMD provided the correlation that sparked researchers to explore if coconut oil, a known antioxidant, may offer protection against the disorder when taken in therapeutic doses. While several studies have proven that high doses of antioxidants can prevent light-induced retinal degeneration, most of these studies were conducted in vitro. This experimental animal study provided a first-of-its-kind opportunity to observe whether CNO provides a protective effect on light-induced retinal degeneration in rats, and to understand the possible mechanism(s) of CNO’s protective effect.

According to the research abstract, “The antioxidant activity of CNO is attributed to biologically active components such as polyphenols, tocopherols, and medium-chain fatty acids, notably lauric acid. CNO is made up of 50% lauric acid which represents its most effective active agent.” CNO has other antioxidant constituents, including vitamin E (tocopherol) and fatty acids such as oleic, linoleic, and caprylic acids,[6] as well as phenolic substances like catechins, gallic acid, and epicatechins, which have proven abilities to scavenge free radicals.[7]

The oil used in the study was prepared by crushing the meat of dried coconuts into a slurry, to which water was added and then strained through a fine sieve. After 24-hours, the oil was scooped off the top, having separated from the coconut milk. This was further strained, and excess moisture was removed before being bottled and stored at room temperature.

The mechanisms of the study involved arranged twenty male rats randomly into four groups of five specimens each. The following protocols were observed over a span of 2 weeks: the control group (CG) received distilled water and were not exposed to bright light. The light-model group (LMG) received distilled water plus bright light exposure. The third grouping, low Cocos nucifera oil group (LCNO), were given 5 ml/kg of CNO daily and were exposed to the bright light. The final grouping, high Cocos nucifera oil group (HCNO), received twice the amount of CNO as did the low-dose group, at 10 ml/kg each day and bright light exposure. Light exposure took the form of two hours of exposure to 5,000 lux of bright white light, administered on the 14th day of the experiment. The supplementation protocols continued for 7 days after exposure to light. On the eighth day, the animals were euthanized and their retinas isolated and examined.

The results of this pioneering study showed that CNO significantly reduced the activity of caspase-3, a family of protease enzymes that plays an essential role in inflammation and apoptosis, programmed cellular death. Administration of CNO also helped to preserve the formation of the retina (retinal morphology). Benefits were greatest in the high-dose group (HCNO).

Researchers contributing to this study have provided important evidence that supports a direct link between the actions of caspase-3 and the progression of light-induced retinal degeneration. While this link has previously been argued as inconsequential, this study found caspase-3 concentrations to be significantly decreased in the groups receiving NCO (LCNO and HCNO) as compared to the group receiving only distilled water (LMG) and light-exposure. Researchers concluded that CNO may protect retinas through an anti-apoptotic mechanism which directly preserves the integrity of healthy cells.

With more than a dozen scientifically-proven health benefits, and more being added to the list continually, coconut oil is quite simply one of the healthiest oils we can consume. CNO’s antioxidant properties have been shown to boost brain function in a single dose. Further studies support this finding, with just one tablespoon of coconut oil daily having been shown to increase HDL or “good” cholesterol, while simultaneously reducing body-mass index (BMI) and waist circumference. Talk about a win-win scenario!

Applied topically, coconut oil has been proven to reduce wound-healing time thanks to the same powerful antioxidant activity observed in the retina study. While some headlines have taken coconut oil to task recently on the basis that it’s a saturated fat, this type of one-size-fits-all thinking is dangerously limited. The FDA’s food pyramid, which serves as our government-sponsored guide to what constitutes a healthy diet, decries coconut oil as being essentially the same as other processed, hydrogenated fats, while simultaneously promoting that more than half of our daily caloric intake should be comprised of carbohydrates like pasta, bread, and cereals. Following this advice has contributed significantly to the epidemics of obesity, diabetes, and cardiovascular disease, all of which continue to rise in the United States.[8],[9],[10] Meanwhile, ketogenic diets favoring a high-fat, low-carb approach to eating (and specifically highlight the use of coconut oil) are proving to be a holy grail for many individuals.

If you or someone you love may be at risk for eye damage due to exposure to bright light, explore the GreenMedInfo research database containing 25 abstracts on light-induced macular degeneration. You’ll find more than 60 abstracts on the health benefits of coconut oil, also.