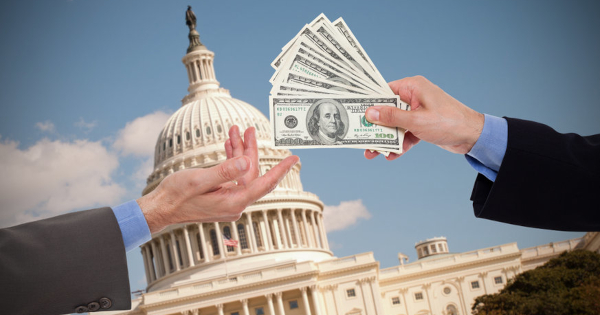 The data have raised serious ethical concerns, prompting questions about how much government actors stand to profit from coercive COVID-19 jab mandates

A Business Insider analysis has shown that at least 75 federal legislators held stock in Moderna, Johnson & Johnson, or Pfizer in 2020. The three companies are responsible for producing the experimental COVID-19 injections. Meanwhile, the paper trail shows Big Pharma corporations shelled out millions of dollars to finance electoral campaigns and lobby the federal government.

The data raised serious ethical concerns about the objectivity of the legislature, prompting questions about how much government actors stand to profit from coercive jab mandates which have deprived Americans of their rights and kneecapped a struggling economy. 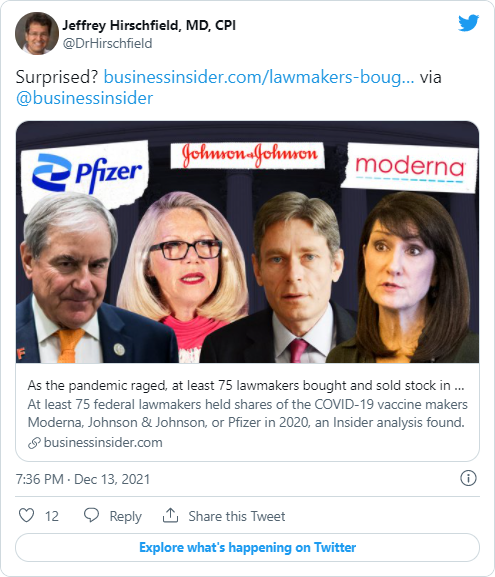 According to the December 13 report, an analysis of federal financial records led Business Insider to conclude that "[d]ozens of Republican and Democratic lawmakers on Capitol Hill have invested in companies that have a direct stake in the nation's response to the COVID-19 pandemic."

In its analysis -- part of the Conflicted Congress project -- the news outlet reviewed some "9,000 financial-disclosure reports for every sitting lawmaker and their top-ranking staffers."

The report found that last year at least 35 U.S. representatives and 13 senators held shares in Johnson & Johnson, which has produced the only single-shot COVID injection on the market.

Meanwhile, 34 representatives and 11 senators held shares in Pfizer, the Big Pharma giant whose double-dose mRNA jab has been approved under an "emergency use authorization" by the Food and Drug Administration (FDA) for children as young as five years old.

Moderna's shareholders are fewer, with just two representatives and their spouses holding shares in the Bill Gates-funded corporation.

"Lawmakers held these investments in COVID-19-minded companies as Congress was at the center of pandemic relief efforts," Business Insider reported. "In 2020 and 2021, members of Congress voted on six relief bills together worth nearly $6 trillion. Congress also authorized more than $10 billion to help drug companies develop and distribute vaccines and forced health insurers to cover the cost of getting the shot."

"T[his] is our problem now," wrote Florida attorney Jeff Childers in a December 14 newsletter, pointing out that the 24 senators with shares in Pfizer and J&J comprise nearly a quarter of the overall membership of the U.S. Senate.

"T[his] is why the pandemic isn't ending," Childers continued. "The concretized financial ecosystem around the virus makes it extremely hard to unwind the global health ‘emergency.'"

Childers suggested Americans will need to "jackhammer all these interested parties out of the Covid business, somehow," adding that "[i]t seems unlikely … that any lawmaker who has a big investment in Pfizer is going to do anything other than vote to keep pushing the jabs, unless I am missing something."

U.S. lawmakers didn't stop at investing in Big Pharma corporations responsible for developing and doling out the COVID-19 injections. The report also indicates the legislators traded stocks in other pandemic-related corporations, including makers of Personal Protective Equipment (PPE) and non-vaccine treatments.

Alabama Republican Sen. Tommy Tuberville has, according to the report, "invested in Johnson & Johnson, Regeneron Pharmaceuticals, and 3M," a company which "creates and distributes personal protective equipment such as N95 masks.

Likewise, Kentucky Democrat Rep. John Yarmuth, who occupies the position of chairman of the House Budget Committee, reportedly sold up to $15,000 worth of stock in 3M in late March of last year.

The report also suggested some lawmakers were hypocritical when taking a stance against profiting from the pandemic, with New Jersey Democrat Rep. Tom Malinowski telling MSNBC in April 2020, "This is not the time for anybody to be profiting off of selling ventilators, vaccines, drugs, treatments, PPE, anywhere in the world," despite personally selling off $15,000 worth of stock in Chembio Diagnostics, which supplies COVID-19 testing kits.

It's unclear to what extent the senators and representatives in question had knowledge of which stocks they owned and sold. The report suggests many of them employed financial advisors to buy and sell stocks on their behalf.

However, the pharmaceutical companies themselves appear to have stacked the deck in their favor, spending millions of dollars to fund election campaigns for preferred candidates and lobby the federal government.

Non-profit organization OpenSecrets, which follows the financial dealings of politicians, reported that through PACs and individuals Pfizer spent over $4 million in 2020 to bankroll candidates and committees. Employees and PACs working for Johnson & Johnson, meanwhile, spent over $2 million.

"Both Pfizer and Johnson & Johnson gave more to Democrats than to Republicans," Business Insider reported, adding that "[o]f the big three vaccine manufacturers, Pfizer leads with the most money spent lobbying members of Congress during the pandemic." Pfizer spent nearly $11 million to lobby the federal government in 2020, OpenSecrets found, while Johnson & Johnson spent $7.9 million on lobbying last year.

"We've seen 50 years of a steady unraveling of government ethics at the hands of wealthy special interests and the politicians who serve them," Joshua Silver, the CEO of the anticorruption advocacy group RepresentUs, told Business Insider, warning that the situation in the U.S. government is "bleak."

"Both parties are conflicted and benefit from the status quo," he said. "The best way for the country to get back on track is for voters to cut ties with self-serving opportunists -- and they better do it fast. The situation is much more bleak than the American public realizes."

Meanwhile former Pfizer VP Mike Yeadon, who has been raising the alarm about the serious health risks posed by the COVID-19 drugs since last year, suggested that lawmakers with financial ties to pharmaceutical companies are unlikely to raise concerns about the jabs or challenge vaccine mandates.

"It's not surprising that the US senate does so little to challenge whether the right things are being done, when the senate has many members who've gorged on vaccine maker stocks," he said.

LifeSiteNews.com is a non-profit Internet service dedicated to issues of culture, life, and family. It was launched in September 1997. LifeSiteNews Daily News reports and information pages are used by numerous organizations and publications, educators, professionals and political, religious and life and family organization leaders and grassroots people across North America and internationally.

LifeSiteNews.com Daily News reports are widely circulated reports on important developments in the United States, Canada and around the world. Their purpose is to provide balance and more accurate coverage on culture, life and family matters than is usually given by other media. Available by free daily email subscription and on LifeSiteNews.com.