The Cure for Cancer Begins With Understanding It 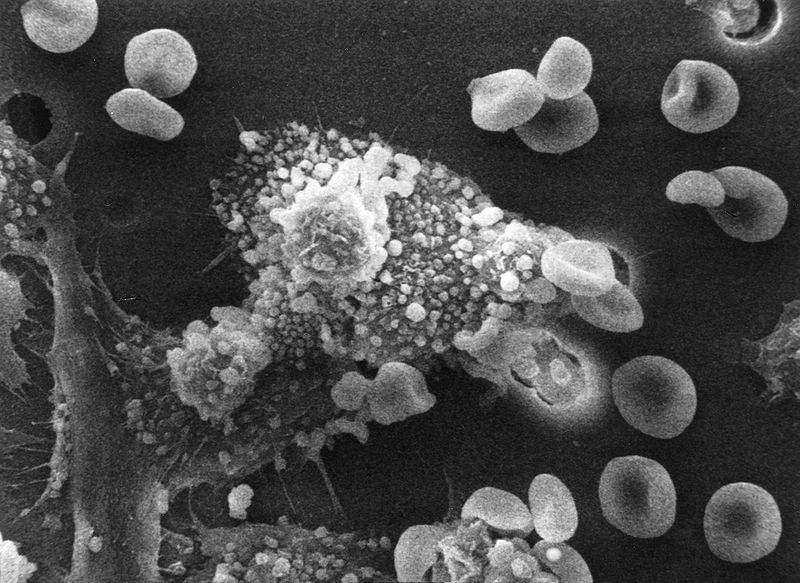 What if cancer is not some predestined gene-bomb setting itself off within us, but rather a logical result of decades' worth of cell shock/damage/adaptation to environmental poisoning, nutrient deprivation and psycho-spiritual stress? Such cells may have learned to survive the constant abuse, and flip into survival mode, which is self-centered, hyper-proliferative (constant self-repair/replication) and aggressive (metastatic).

In a remarkable new essay by Mark Vincent, this view has found its vindication. Titled, "Cancer: A de-repression of a default survival program common to all cells?: A life-history perspective on the nature of cancer," cancer is viewed in an entirely new light:

Cancer viewed as a programmed, evolutionarily conserved life-form, rather than just a random series of disease-causing mutations, answers the rarely asked question of what the cancer cell is for, provides meaning for its otherwise mysterious suite of attributes, and encourages a different type of thinking about treatment.

The broad but consistent spectrum of traits, well-recognized in all aggressive cancers, group naturally into three categories: taxonomy ("phylogenation"), atavism ("re-primitivization") and robustness ("adaptive resilience"). The parsimonious explanation is not convergent evolution, but the release of an highly conserved survival program, honed by the exigencies of the Pre-Cambrian, to which the cancer cell seems better adapted; and which is recreated within, and at great cost to, its host.

What Mark Vincent explains here is cancer as a regression (atavism/re-primitivization) of the human normal cell type, to a more ancient and robust cell type possessed by an ancestral cell lineage in pre-Cambrian times, well over 542 million years ago. If this is true, given the right (or wrong) conditions, normal cells may regress to a more primitive, far more individualistic cell phenotype in an attempt to survive (if not thrive) within the biochemical/bioenergetic adversities characteristic of the sickened, cancer-prone body.

The concept of regression to more ancient forms of incarnation within biology is not novel. The well-known principle of "ontogeny" recapitulates "phylogeny" in embryogenesis, also known as the "recapitulation theory," for instance, proposes that the fetus' development follows exactly the same sequence as the sequence of its evolutionary ancestors.

There is, in other words, inscribed within our genetic code a history of all past cellular/organismal incarnations, which while normally dormant, can be re-awakened when necessary to provide survival advantages. Who, after all, can say that cancer cells or tumors far from representing pure chaos (mutational view of cancer causation) are not symptoms of an attempt to heal, or regain balance, within less-than-ideal conditions, when no other viable options remain?

What may be most important about this new view on cancer are its existential implications. After all, if cancer is not just something that by luck of the draw does not happen to this person, while happening to that person, but actually has meaning, then perhaps we can begin to de-program ourselves from the rampant fatalism that undergirds the popular sentiment that cancer is to be both loathed and feared, but never quite understood.

Of course, the fatalism associated with cancer is heavily reinforced by the very organizations (largely self-appointed) in charge of "awareness campaigns" and "fundraising" in the increasingly gaudy and blatantly cynical "cause marketing" programs that have proliferated (like the cancers themselves) into every facet of American, consumerism-based culture. The ideology of "watchful waiting" through increasingly invasive screening procedures consistently reinforces this fundamental fatalism. Cancer is subconsciously drawn to those who would do no more than wait for its inevitable bodily emergence.

People are told what they can do to "reduce risk," but not that the end-point itself (cancer) would become avoidable if we sought to better understand it, i.e., knowing the cause enables you to mitigate and/or remove it. This active process of programming and ceaselessly reinforcing people to think of disease in terms of calculating and "reducing risk" is heavily reinforced by the dominance of mathematical epidemiology in today's practice of medicine.

Ultimately, it shifts the locus of power from the patient to the medical system whose priest-like claim to truth, obtained through complex algebraic equations and technologies so elaborate as to perplex even their engineers and manufacturers, puts them in the position of having the same type of control over our bodies as once did the religious clergy our souls.

Once we begin to comprehend that the radically unnatural shift in the cell's immediate environment, due to chemical exposures, nutrient deficiencies, and chronic and acute psycho-spiritual stress, may promote its "neoplastic transformation" into cancer, we can begin to liberate ourselves from many avoidable and treatable causes of this archetypal human condition.

For additional research, our Cancer Research Page, for instance, contains over 9,800 articles from the National Library of Medicine on 986 natural substances with documented potential value in cancer prevention or treatment, including 737 on curcumin alone. It also contains research on 230 "problem substances," which exhibit carcinogenic potential, as well as 67 "therapeutic actions," e.g., yoga and sunlight exposure, which have anticancer effects.

Also, for additional reflections on the nature of cancer, read the essay: The Flame of Cell Life-Death In the Miracle of Regeneration