The Dark Side of Breast Cancer (Un)Awareness Month 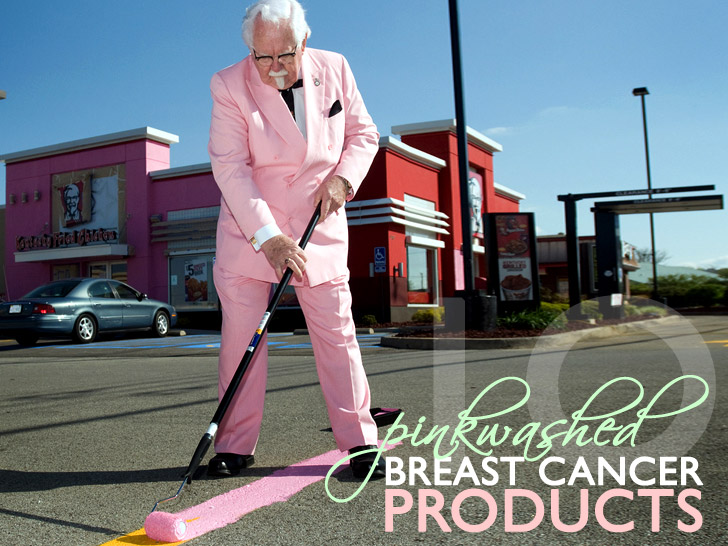 Sadly, Breast Cancer Awareness Month is a time of increasing awareness not of the preventable causes of breast cancer, but of the breast cancer industry's insatiable need to both raise money for research into a pharmaceutical cure, and to promote its primary means of "prevention": early detection via x-ray mammography

The history of Breast Cancer Awareness Month's surprising origins is a matter of the public record:

"NBCAM was founded in 1985 as a partnership between the American Cancer Society and the pharmaceutical division of Imperial Chemical Industries (now part of AstraZeneca, maker of several anti-breast cancer drugs). The aim of the NBCAM from the start has been to promote mammography as the most effective weapon in the fight against breast cancer." ~ Wikipedia

If you doubt Wikipedia as a reliable source, visit the NBCAM website and try to contact them. It will be AstraZeneca that you will required to connect with, as evidenced by the screenshot below:

[Note: the NBCAM website was taken down since this article was first written, likely in response to growing awareness of their ulterior motives.]

AstraZeneca, manufacturer of the blockbuster breast cancer drugs Arimidex and Tamoxifen, was formed through the merger of Astra AB and Zeneca Group (a pharmaceutical subsidiary of Imperial Chemical Industries) in 1999. Imperial Chemical Industries, a multinational corporation responsible for producing carcinogenic petrochemical derivatives such as vinyl chloride and pesticides, founded National Breast Cancer Awareness Month in 1985, in partnership with the American Cancer Society, in order to promote the widespread adoption of x-ray mammography, whose horrors we have documented elsewhere.

Sadly, Breast Cancer Awareness Month is a time of increasing awareness not of the preventable causes of breast cancer, but of the breast cancer industry's insatiable need to both raise money for research into a pharmaceutical cure, and to promote its primary means of "prevention": early detection via x-ray mammography.

On first account, a pharmaceutical "cure" is as unlikely as it is oxymoronic. Drugs do not cure disease anymore than bullets cure war. Beneath modern medicine's showy display of diagnostic contraptions, heroic "life-saving" procedures, and an armory of exotic drugs of strange origin and power, it is always the body's ability to heal itself - beneath the pomp and circumstance - that is truly responsible for medicine's apparent successes. Too often, in spite of what medicine does to "treat" or "save" the body, it is the body which against invasive chemical and surgical medical interventions, silently treats and saves itself.

If it were not for the body's truly miraculous self-healing abilities, and the ceaseless self-correction process that occurs each and every moment within each and every cell, our bodies would perish within a matter of minutes. The mystery is not in how our body succumbs to cancer; rather the mystery is in how, after years and even decades of chemical exposure and nutrient deprivation our bodies prevail against cancer for so long.

The primary causes of breast cancer: nutritional deficiencies, exposure to environmental toxicity, inflammation, estrogen dominance and the resultant breakdown in genetic integrity and immune surveillance, are entirely overlooked by this fixation on drug therapy and its would-be "magic bullets."

Billions of dollars are raised and funneled towards drug research, when the lowly turmeric plant, the humble cabbage and the unassuming bowl of miso soup may offer far more promise in the prevention and treatment of breast cancer than all the toximolecular drugs on the market put together. (To view several dozen substances, visit our Breast Cancer page)

When it comes to the breast cancer industry's emphasis on equating "prevention" with "early detection" through x-ray mammography, nowhere is the inherently pathological ideology of allopathic medicine more clearly evident. Not only is the very ionizing radiation used to discern pathological lesions in breast tissue one of the very risk factors for the development of breast cancer, but the identification of the word "prevention" with "early detection," is a disingenuous way of saying that all we can do to prevent breast cancer is to detect its inevitable presence sooner than would be possible without this technology.

If women succumb to the idea of prevention as doing nothing but waiting for the detection of the disease, many will find a similarly deranged logic reemerge later when the self-fulfilling prophecy of prevention-through-doing-nothing is fulfilled and "treatment" is now required. "Treatment," when not strictly surgical, involves the use of very powerful chemicals and high doses of ionizing radiation which "poison" the cancer cells.

The obvious problem with this approach is that the application of either form of death energy is not suitably selective, and in the long run, many women die sooner from the side effects of toximolecular "therapy" than from the cancer itself. Why is the obvious question never asked: if exposure to the genotoxic and immune system disabling effects of chemicals and radiation is causative in breast cancer, then why is blasting the body with more poisonous chemicals and radiation considered sound treatment?

The answer to this question has much more to do with ignorance than it does an intentional desire to do harm. But the results are the same: unnecessary pain, suffering and death.

Faced with a situation where medieval notions of prevention and treatment of breast cancer are the norm, it is no wonder that when polled over 40% of women believe they will contract breast cancer sometime in their life - well over three times their actual risk. After all, have any of them been given a sense that there is something they can do to actually prevent their disease other than "watchful waiting"?

Obfuscating the real preventative measures available to women to combat breast cancer, and all cancers for that matter, trusted "authoritative" sources like the Susan G. Komen Foundation publish irresponsible statements like this:

"It is unclear what the exact relationship is between eating fruits and vegetables and breast cancer risk...little, if any link was found between the two in a pooled analysis that combined data from eight large studies."

Have we really come to the point where the commonsense consumption of fruits and vegetables in the prevention of disease can so matter-of-factly be called into question? Do we really need randomized, double-blind and placebo controlled clinical trials to prove beyond a shadow of a doubt that our bodies can benefit from the phytonutrients and antioxidants in fruits and vegetables in the prevention of cancer?

Another atrocious example of this conspiracy against identifying the obvious causes and cures for diseases like breast cancer is the National Breast Cancer Foundation's website. Go to the top of their homepage and type in "carcinogen" in their site wide search box. This is what will appear on the results page:

Your search - carcinogen - did not match any documents. No pages were found containing "carcinogen".

On Susan G. Komen's website the term only emerges twice, and both in the context of denying the likliehood of there being a connection between smoking and breast cancer.

If you can remove the reality of carcinogenicity by erasing from the mind's of would-be cancer sufferers the word carcinogen, and thereby conceal the link between environmental and dietary exposures of a multitude of toxins, then the obvious "cure" these massive organizations are vacuuming in billions of dollars of donations every year to find, namely, the removal of carcinogens and detoxification of the system, will never be discovered.

Examples like these make it increasingly apparent that orthodox medicine, and the world view it represents, is approaching a theoretical end-time perhaps most accurately described as Pharmageddon. Within the horizon of this perspective vitamins are considered toxic, fruits and vegetables simply a source of caloric content (a poor one, at that), and cancer-causing drugs are understood as the only legitimate and for that matter, legal, way to combat cancer. Are we really at the tipping point, or is there still hope?

Fortunately there are thousands of scientific studies extant today on the therapeutic value of foods, herbs and spices in breast health, many of which can be found on the government's own biomedical database known as MEDLINE. Decades of research have confirmed the veracity of the Hippocratic phrase: "Let food be thy medicine," and until a prescription is required to obtain and consume organic food, we can still draw from a vast cornucopia of natural substances whose safety and efficacy that the conventional pharmacopeia to shame.