Dental Composites for Kids: Even Worse Than Mercury Amalgam?

Views 21737
Posted on:
Tuesday, September 18th 2012 at 6:00 am
Written By:
Sayer Ji, Founder
This article is copyrighted by GreenMedInfo LLC, 2012
Visit our Re-post guidelines 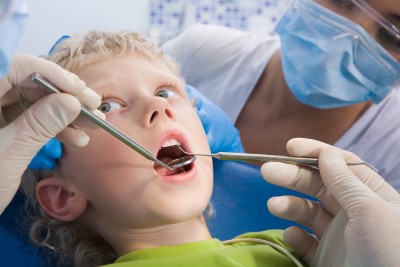 Research published in the journal Pediatrics indicates that some dental composites -- long promoted as overall safer than mercury-based amalgams -- are having a significant negative impact on the psychosocial functioning of children. In fact, bisphenol-A based dental restorations were found to be worse than mercury-based amalgams when it came to learning impairment and behavioral issues. [i]

The study used data from The New England Children's Amalgam Trial, which, surprisingly, found that children randomized to amalgam restorations had better psychosocial outcomes than those assigned to bisphenol-A based epoxy resin composites (bisGMA) for tooth restorations. The new analysis aimed to "examine whether greater exposure to dental composites is associated with psychosocial problems in children."

They noted "No associations were found with [non BPA-based] compomer, nor with amalgam exposure levels among children randomized to amalgam."

It should be emphasized that this study should not be misinterpreted to mean that amalgams are safe. So, let us dispel the myth of a "safe" or "safer" amalgam in the following way. What follows is an article published in the journal The Science of the Total Environment, well worth reading in its entirety, which covers disturbing facts about amalgams quite thoroughly:

Dental amalgam is 50% metallic mercury (Hg) by weight and Hg vapour continuously evolves from in-place dental amalgam, causing increased Hg content with increasing amalgam load in urine, faeces, exhaled breath, saliva, blood, and various organs and tissues including the kidney, pituitary gland, liver, and brain. The Hg content also increases with maternal amalgam load in amniotic fluid, placenta, cord blood, meconium, various foetal tissues including liver, kidney and brain, in colostrum and breast milk. Based on 2001 to 2004 population statistics, 181.1 million Americans carry a grand total of 1.46 billion restored teeth. Children as young as 26 months were recorded as having restored teeth. Past dental practice and recently available data indicate that the majority of these restorations are composed of dental amalgam. Employing recent US population-based statistics on body weight and the frequency of dentally restored tooth surfaces, and recent research on the incremental increase in urinary Hg concentration per amalgam-filled tooth surface, estimates of Hg exposure from amalgam fillings were determined for 5 age groups of the US population. Three specific exposure scenarios were considered, each scenario incrementally reducing the number of tooth surfaces assumed to be restored with amalgam. Based on the least conservative of the scenarios evaluated, it was estimated that some 67.2 million Americans would exceed the Hg dose associated with the reference exposure level (REL) of 0.3 μg/m(3) established by the US Environmental Protection Agency; and 122.3 million Americans would exceed the dose associated with the REL of 0.03 μg/m(3) established by the California Environmental Protection Agency. Exposure estimates are consistent with previous estimates presented by Health Canada in 1995, and amount to 0.2 to 0.4 μg/day per amalgam-filled tooth surface, or 0.5 to 1 μg/day/amalgam-filled tooth, depending on age and other factors.

While bisphenol-A is actually better known for its endocrine disrupting properties, as it mimics and/or interferes with estrogen receptors and pathways in the body, research indicates that it moves freely through the blood-brain barrier, due to its lipophilic (fat-loving) properties.[ii] This means that whatever bisphenol-A is released from the composite material will eventually have direct access to the children's developing central nervous system. There is also preliminary research indicating that bisphenol A may result in central nervous system hyperactivity. BisGMA-based dental composites have also been studied in vitro experiements to be highly toxic to human DNA, raising concern that the the adverse effects of these dental restorations stretch far beyond behavioral/cognitive problems to increasing childhood cancer risk.

Unfortunately, BPA (and similar bisphenol analogs, such as Bisphenol-S), are omnipresent in food liners, thermal printer papers, and paper currencies, to name but a few common sources of exposure, making the issue far larger than dental restorations.

While reducing or eliminating exposure should be the first priority, there are natural substances which have been studied to reduce bisphenol A toxicity either through enhancing its elimination from the body, or by enhancing its degradation. One of the most interesting examples are probiotics. Read Probiotics Destroy Toxic Chemicals In Our Gut For Us to learn more.