Do Hidden Opiates in Our Food Explain Food Addictions? 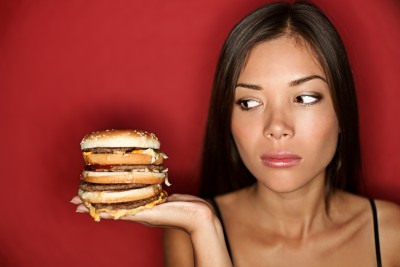 Food addictions are not strictly "psychological" problems, but have a hard-wired, organic component.

Many of the most commonly consumed foods in Western culture actually contain narcotic properties associated with the presence of psychoactive chemicals that bind to opioid receptors in the nervous system. These peptides are so powerful that researchers block their action with drugs such as naltrexone which is used to treat addiction among heroin abusers, and naloxone which is used to prevent death from heroin overdose.

These "food opiates" are heavily concentrated in wheat and dairy products, especially cow’s milk. Wheat contains the following opioid peptides, known as gluten exorphins, alongside which are listed their amino acid structure:

Cow's milk, depending on the milk variety (A1 or A2), contain a variety of combinations of the following casomorphin peptides:

It can be argued that many of the most popular foods consumed in Western culture are done so not primarily for their nutritive value but rather for their addictive properties. Some of these foods we become truly infatuated with and are identified as "comfort foods," that are "to die for," or that we "love."

Food opiates are widely distributed throughout our diet, and are found in many unsuspecting places. Fructose, which is fast becoming the primary source of calories in the American diet, while not itself an opioid peptide, is known to increase brain levels of endogenous morphine following ingestion,[1][2] and may produce metabolic products in the brain very similar to those produced by morphine.[3] In fact, it has been identified to stimulate a "hedonic pathway" in the brain, not unlike alcohol, which incidentally is metabolized along the same liver pathways.[4] Fructose, in isolated or concentrated form, is highly toxic and have been linked to over 70 health conditions.

Some other common food opiates include

While many of our most commonly consumed foods and beverages contain food opiates, our original infatuation with opiate peptides actually begins at birth, as is nature’s inherently intelligent design. Being born into the world an extremely underdeveloped mammal (i.e. compared to horses we take years longer to gain independence),* the biological imperative is for there to be a strong bond between mother and offspring consummated in the act of breastfeeding.

Breast milk, therefore, contains actual morphine. This is to ensure that a very close bond forms and that the offspring will seek out and obtain nourishment by garnishing physical dependency.

The fact that our first food -- breast milk -- contains opiates and that the biosynthetic pathway for morphine exist in tissues such as the liver, blood and brain, indicate that our species was destined to be drawn to substances that either mimic the action of opiates, or modulate their secretion and/or activity within our bodies.[12]

Ultimately, many food opiates are consumed in order to self-medicate. Coffee, for instance, has profound psychoactive properties that cannot be reduced to its caffeine content alone. The opiate-like property of coffee explains why it may relax and/or reduce stress in certain people, raising the threshold of anxiety or aggression in a way quite opposite to what would be expected from the effects of caffeine alone.

This effect may be maintained as long as coffee is administered continuously, like any other pharmacologically drug. However, if suddenly withdrawn, some experience symptoms identical to those associated with withdrawal from opiate drugs.

In addition, many food opiates, such as are found in wheat and cow’s milk products, entice us to consume foods that are intrinsically unhealthy. Wheat, for instance, has been linked to over 160 health conditions, and cow’s milk is known to be a risk factor for type 1 diabetes. But both are consumed globally in the billions of pounds and lauded as "health foods" by the unsuspecting masses unaware of the addictive hold they may have on them. The Dark Side of Wheat and cow's milk is rarely acknowledged, though the role of food opiates may shed some much needed light on the topic.

The point is that food is not just a "fuel" for the body, as classically defined through nutritional reductionism. It has profound genoregulatory and neuroendocrine modulating properties. One of the best ways to ascertain whether food opiates are affecting your health is to embark on an elimination diet. Sometimes following a gluten or cow's milk free diet, the physiological shackles are thrown off, and it is possible to experience renewed health and vitality.

Many seemingly unrelated health conditions may improve and/or go into remission. When the food is reintroduced months later, it is far easier to feel its true effects on the body -- adverse effects that were always there, but due to their chronic consumption were considered normal.

*an interesting fact of evolutionary biology is that our head size has grown so large in proportion to our hip size that we must be born with a relatively underdeveloped body in order to make it through the birth canal. This ensures that a great proportion of our development must occur outside of the womb, making our dependence on milk much more intense.

For the same reason that human breast milk contains morphine, the casomorphins in cow's milk are intended to sedate/placate/anesthetize calves born into the wild. Is it any surprise that humans (whose poignantly aware brains contain as many neurons as stars in our galaxy!) are the only mammals who never stop weaning themselves from this narcotic elixir? Perhaps we dope and dumb ourselves down with these opiate peptides in order not to go insane from the poignant awareness that such a huge brain generates.

[1] Antagonism of the morphine-induced locomotor activation of mice by fructose: comparison with other opiates and sugars, and sugar effects on brain morphine. Life Sci. 1991 ;49(10):727-34.