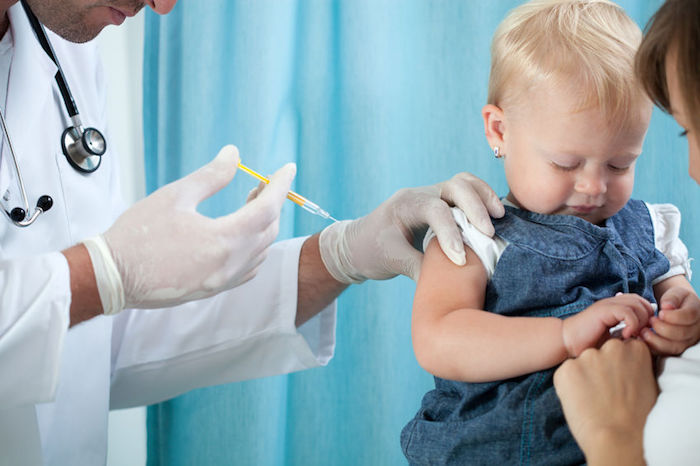 Doctors vaccinate children to avoid disease, but are these injections causing more dangerous effects than the illnesses they claim to combat?

In 2002, general practitioner and homeopath Dr. Jayne Donegan published a paper titled Are Childhood Infections a Good Thing? In her paper, she explained that the reason we vaccinate children for a variety of childhood diseases is because we have been told that these diseases are dangerous and can kill them.

“The mortality rate for tuberculosis fell no differently in countries that did and did not use the BCG vaccine. Scarlet fever, rheumatic fever and typhus were deadly killers. They all disappeared without a vaccine.”

From the charts below, we can see exactly what has been happening. As soon as a disease begins to die out, the government introduces a vaccine and hails it as a success. 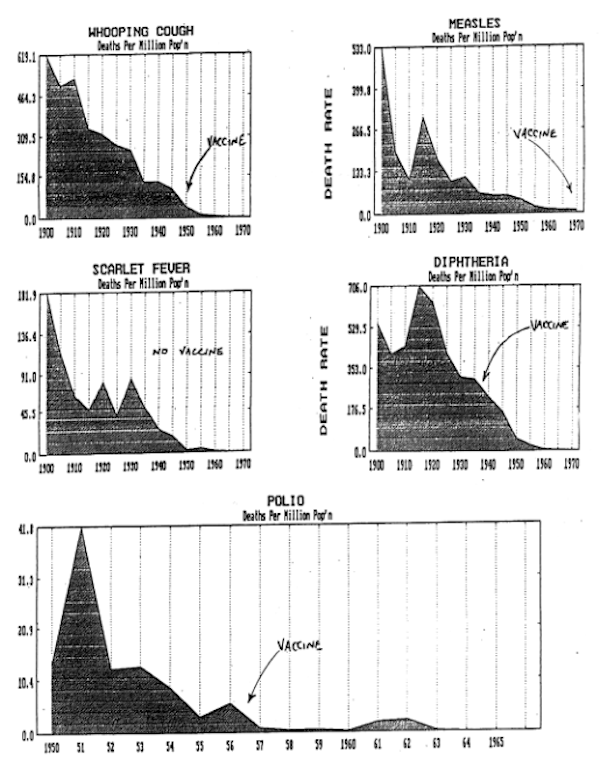 This tactic has been used for many years.

Vaccines for Childhood Diseases Continue to Be Introduced

Despite this information being freely available, in 2005, the MMRV, a vaccine said to protect children against measles, mumps, rubella and varicella (chicken pox) was licensed for use in the US, which, according to the CDC, was said to be very safe and effective.

However, what is particularly worrying for parents is the fact that, according to a CDC paper titled Use of Combination Measles, Mumps, Rubella, and Varicella Vaccine: Recommendations of the Advisory Committee on Immunization Practices (ACIP), the MMRV vaccine:

This wording appears to indicate that children have been taking part in vaccination trials for several years without their parents’ consent. Furthermore, according to the CDC:

“In February 2008, on the basis of preliminary data from two studies conducted post licensure that suggested an increased risk for febrile seizures 5--12 days after vaccination among children aged 12--23 months who had received the first dose of MMRV vaccine compared with children the same age who had received the first dose of MMR vaccine and varicella vaccine administered as separate injections at the same visit, ACIP issued updated recommendations regarding MMRV vaccine use (CDC. Update: recommendations from the Advisory Committee on Immunization Practices [ACIP] regarding administration of combination MMRV vaccine. These updated recommendations expressed no preference for use of MMRV vaccine over separate injections of equivalent component vaccines for both the first and second doses.

This is extremely worrying because it appears that the CDC has not only indicated that children are being used in vaccination trials without prior knowledge or consent, but that a small percentage of these children have suffered febrile convulsions as a direct result.

With this information in mind, we need to ask ourselves whether or not the MMR is the only vaccination that has had an extra vaccination added to it?

Study Reveals That Children Are Dying of Breakthrough Varicella

Unfortunately, our governments’ apparent disregard for the welfare of our children has continued, leading to illness, disability and death. According to a study written by Jessica Leung et al. published in February 2017, titled Severe varicella in persons vaccinated with varicella vaccine (breakthrough varicella): a systematic literature review, breakthrough varicella, due to wild-type (WT) VZV, may occur after the single varicella vaccine and also the MMRV vaccine.

This type of breakthrough varicella is also known as vaccine failure.

The researchers stated that:

“Breakthrough varicella is generally milder in severity and duration than varicella in unvaccinated persons; clinical symptoms usually consist of a rash with <50 lesions, predominately maculopapular although sometimes also with vesicular lesions.”

Up to this point, it appears that although children may develop the disease that they have been vaccinated against, after they have received the vaccine, the symptoms are a lot milder and therefore, supposedly there is nothing to worry about.

However, it is what the researchers  revealed next that is truly shocking. They stated:

“However, there have been cases of breakthrough varicella that resulted in extensive rash, complications, and even death.” (own emphasis)

“Breakthrough varicella is defined as varicella in a person who received at least one dose of varicella vaccine (single-antigen or MMRV vaccines) ≥42 days before occurrence of symptoms, without other apparent cause. Forty-two days, which equals two incubation periods for varicella, is used to differentiate breakthrough cases from potential vaccine-strain varicella-like rashes. Post-licensure experience showed that vaccine-strain rashes occurred typically 21 days’ post vaccination with a range of 5–42 days’ post vaccination.”

After studying a number of peer-reviewed studies published between November 30, 1974, when information on the varicella vaccine was first published and August, 1, 2016, the researchers discovered that breakthrough varicella and death were not the only adverse reactions the recipients of the single varicella and the MMRV should be concerned about.

“For the purpose of our review, we defined severe breakthrough varicella as breakthrough varicella that resulted in disseminated VZV infection with other organ involvement in addition to skin: pneumonia, complications related to nervous, hematologic, ocular, renal, and hepatic systems, sepsis and secondary infection resulting in bacteremia, and other complications, any hospitalizations in addition to cases that met the first criterion, or death.”

Out of 915 articles that were reviewed by the researchers, a total of 215 described breakthrough varicella. They decided that 34 of the articles met their inclusion criteria for their publication and in a shocking revelation, they identified that:

Under the title of Death, the authors wrote:

“There have been six cases of fatal breakthrough varicella reported in eight articles, all described above. Five of these deaths were reported from the United States and summarized in the article by Leung et al; the 6th death was reported from Turkey by Dinleyici et al. The deaths occurred in one-dose vaccines (interval between vaccination and death was 1–13 years; information available for 5 cases), in children aged <18 years (ages 4, 4, 7, 9, 15, and <18 years) and 5 of the 6 occurred in immunocompromised persons due to either medical conditions or medications; the year of death was 1997, 2004, 2011, 2012, 2013, and 2008–2013 for the death reported from Turkey (specific year of death not indicated in the publication).

These figures make extremely disturbing reading and reveal that by receiving this vaccination, not only can children catch the disease that they were vaccinated against but they can suffer serious complications, including death, as a result.

In a document published in 2010, titled Appendix X. Brief Summary of Chickenpox: A New Epidemic of Disease and Corruption, Gary S. Goldman, PhD, wrote that:

“There is a greater chance of a person dying by being struck by lightning in the U.S. (National Oceanic & Atmospheric —NOAA—Technical Memorandum NWS SR -193) than of a child dying from contracting chickenpox.” (own emphasis)

He concluded his paper with the following statement:

“Prior to the universal varicella vaccination program, 95% of adults experienced natural chickenpox (usually as school aged children)—these cases were usually benign and resulted in long term immunity. This high percentage of individuals having long term immunity has been compromised by mass vaccination of children which provides at best 70 to 90% immunity that is temporary and of unknown duration—shifting chickenpox to a more vulnerable adult population where chickenpox carries 20 times more risk of death and 15 times more risk of hospitalization compared to children. Add to this the adverse effects of both the chickenpox and shingles vaccines as well as the potential for increased risk of shingles for an estimated 30 to 50 years among adults. The Universal Varicella (Chickenpox) Vaccination Program now requires booster vaccines; however, these are less effective than the natural immunity that existed in communities prior to licensure of the varicella vaccine.”

We need to consider whether or not this vaccination is worth the risk; after all, chicken pox (varicella) is a relatively mild childhood disease, which, although uncomfortable because of the itching, usually runs its course with no problems. Of course, as with any illness, there are always exceptions, although these are believed to be extremely rare.

It appears from my research that receiving a varicella vaccination as either a single vaccine or as part of the MMRV can be extremely dangerous. We urge parents to be vigilant when having their child vaccinated. Always get the full information on the vaccine before it is administered to your child because, according to my research, the varicella vaccination is being added to the MMR vaccination without our knowledge. 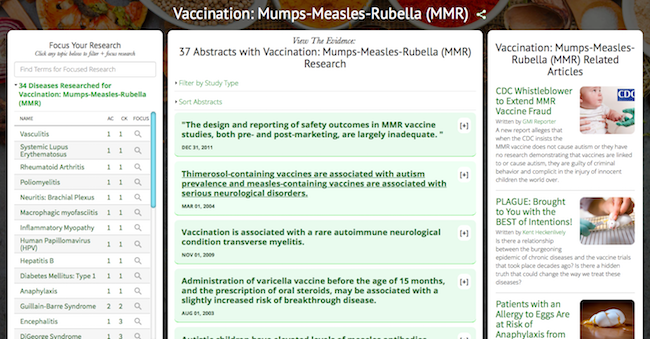 For evidence-based research on the MMR vaccine, visit the GreenMedInfo.com Research Dashboard.