Views 7606
Posted on:
Wednesday, April 10th 2013 at 8:45 am
Written By:
Sayer Ji, Founder
This article is copyrighted by GreenMedInfo LLC, 2013
Visit our Re-post guidelines 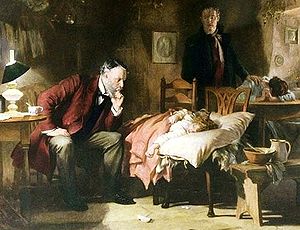 A surprisingly consistent body of research exists indicating that conventional medical training actually reduces practitioner empathy. What is worse, the decline in empathy appears even more pronounced at the time that the curriculum shifts towards patient-care activities.

In one study published in 2009 in the journal Academic Medicine entitled "The devil is in the third year: a longitudinal study of erosion of empathy in medical school," the authors conclude:

It is ironic that the erosion of empathy occurs during a time when the curriculum is shifting toward patient-care activities; this is when empathy is most essential."

In another, higher-powered systematic review published in the same journal last year entitled "Empathy decline and its reasons: a systematic review of studies with medical students and residents," researchers looked at data from 1990-2010, which included 18 studies, and found:

The five longitudinal and two cross-sectional studies of residents showed a decrease in empathy during residency. The studies pointed to the clinical practice phase of training and the distress produced by aspects of the "hidden," "formal," and "informal" curricula as main reasons for empathy decline."

The results of the reviewed studies, especially those with longitudinal data, suggest that empathy decline during medical school and residency compromises striving toward professionalism and may threaten health care quality."

While the ironic decline of empathy associated with clinical practice during medical training is cause for concern, what may be even more disturbing is that the decline in empathy persists after training has ended.

In a 2005 study published in Academic Medicine and entitled "Mood change and empathy decline persist during three years of internal medicine training," researchers noted that some of the mood disturbances and declines in empathy associated with residency/internship "never fully recover," indicating that conventional medical training may produce real, diagnosable psychological traumas that may never be fully resolved and may adversely affect the quality of healthcare provided.

Empathy, after all, has concrete and measurable therapeutic effects in others. In 2009, researchers found that practitioner empathy reduced the duration of the common cold in their patients. Conversely, a negative and/or indifferent attitude towards the patient has measurable adverse effects, also known as the nocebo effect.  Indeed, our recent article titled, "Research: Some Cancer Diagnoses Kill You Quicker Than the Cancer," discusses the finding that the risk of suicide is up to 16 times higher and the risk of heart-related death 26.9 times higher during the first week following a cancer diagnosis versus those who were diagnosed cancer free.