Views 13658
Posted on:
Wednesday, September 12th 2012 at 5:00 am
Written By:
Sayer Ji, Founder
This article is copyrighted by GreenMedInfo LLC, 2012
Visit our Re-post guidelines 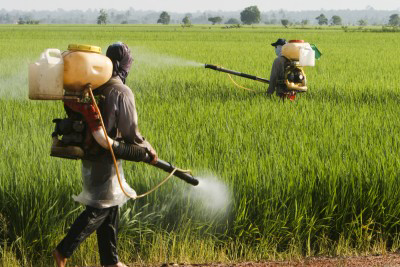 Whether you are aware of it or not, your food, air and water are the battle ground upon which a titanic struggle between the multinational biotech corporations Monsanto and Dow AgroScience is now playing out. As a result, your health and environment (and that of all future generations) are at profound risk of irreparable harm.

Dow AgroSciences (a subsidiary of Dow Chemicals) recently announced their development of genetically-engineered corn, soybean, and cotton plants metabolically resistant to the herbicide 2,4-Dichlorophenoxyacetic acid (2,4-D), a major ingredient in Agent Orange.  What this means for our future is that, if approved for use, vast regions of our country will soon be sprayed with a chemical that has been linked to over 400,000 birth defects in Vietnam.

How did we end up here?

History is repeating itself before our eyes. Dow Chemicals and Monsanto, joined at the karmic hip, both manufactured Agent Orange for use in Vietnam, and both are notorious for minimizing the adverse health effects associated with exposure to the agent. Neither corporation learned from its mistakes, largely because the US government underwrote the risk of using the chemical, and therefore shielded them from the bulk of the legal and financial fallout.

But this lack of culpability has now set up the conditions for a reliving of the horrors of systemic herbicide exposure, only this time on American soil, with Monsanto choosing glyphosate (also a birth-defect causing chemical), and Dow Chemical sticking with its old time favorite.

The two corporations are now pitched in a heated battle for dominance, as Monsanto's once global hegemony over genetically engineered staple crops like soy and corn began to falter, in the following four ways:

1) Roundup resistance, which was bioengineered into food crops, began spreading to a number of other plants (weeds), rendering Roundup ineffective, or requiring much higher (and therefore much more toxic) quantities.

2) Insects began to develop resistance to Monsanto's Bt gene, which was engineered into their plants as a "natural" insecticide, conferring theoretical resistance to Bt-sensitive pests.

3) Research on glyphosate, the major active ingredient in Roundup, which has been used at the rate of 80,000 tons in the US in 2007 alone, began to accumulate, linking it to dozens of serious adverse health.

4) Glyphosate was found to contaminate our air, food and groundwater.

Given these fatal flaws in Monsanto's once impenetrable armor, Dow AgroScience is positioning its new GE plants as a "next-generation" solution to the problems of glyphosate and Bt resistance. However, by engineering what amounts to Agent Orange-resistance  into their "new and improved" crops the potential environmental and health fallout to exposed areas is nothing less than horrific. Do we need to view pictures of the victims of Agent Orange to be reminded of how toxic the ingredients in this herbicide are? (Warning: the images are graphic).

Instead of learning from Monsanto's colossal mistakes (which happens when you play geneticist-as-God and use a broad spectrum poison to kill all but your "chosen" plants) Dow AgroScience's solution is to multiply the problem by a factor of three, creating the "first-ever, three-gene," herbicide-tolerant staple crops.

What this means is that instead of using only one highly toxic herbicide (Roundup), three will be used simultaneously, further increasing the risk of serious exposures, and setting up the conditions for synergistic toxicities – something that toxicological risk assessments on singular herbicide ingredients, which establish "an acceptable level of harm," never account for.

While Dow AgroScience claims that 2,4 D resistance will not present the same problem that Roundup resistance did for Monsanto, the science to support these marketing claims is not on their side.

In a recent article published in the Proceedings of the National Academy of Sciences of the United States, researchers reviewed Dow Chemicals' own published research on 2,4 D resistant crops, and found it highly misleading and inaccurate.

In their recent article, we feel that Wright et al. (1) [Dow AgroSciences researcher] misrepresented the potential for 2,4-dichlorophenoxyacetic acid (2,4-D)–resistant weeds in 2,4-D–resistant cropping systems and exaggerated the sustainability of their approach to addressing glyphosate-resistant weed problems in agriculture.

We were surprised that Wright et al. (1) stated that only "very few" 2,4-D–resistant weed species have evolved without quoting a specific number. We checked the database that they used to support this claim (2) and were alarmed to learn that, globally, 28 species across 16 plant families have already evolved resistance to the synthetic auxin herbicides, the mode of action to which 2,4-D belongs. Of these, 16 are known to be resistant to 2,4-D specifically (for comparison, 21 species are resistant to glyphosate globally). Furthermore, the claim that 2,4-D resistance is unlikely to evolve because of the complex and essential functions that auxin plays in plants is unsubstantiated.

In a nutshell, 2,4 D and 2,4 D resistant crops are not a solution to the underlying problem of herbicide resistance in genetically engineered crops. In the same way that we have created the monster of antibiotic-resistance super-bugs like MRSA (methillicin-resistant staphylococcus aureus), continually developing more and more toxic chemicals to combat a problem that can not be solved with them, Nature will ultimately survive the manmade systems that seek to dominate her modes of production; the question is whether we will survive ourselves, if we continue down this path much longer.