Views 674
Posted on:
Thursday, May 21st 2020 at 4:15 pm
Written By:
GreenMedInfo Research Group
This article is copyrighted by GreenMedInfo LLC, 2020
Visit our Re-post guidelines 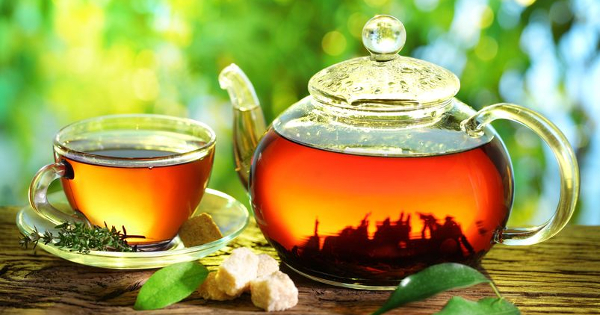 Want to make a quick, easy lifestyle choice that has the potential to benefit brain health and even slow cognitive aging? Pour yourself a delicious glass of tea and bottoms up!

According to a study headed by the National University of Singapore, drinking tea may be one of the easiest -- and tastiest -- ways to preserve a healthy brain as you age.

Researchers from the Universities of Essex and Cambridge in the UK collaborated with scientists from the NUS School of Medicine on the three-year study conducted between 2015 and 2018. Their findings were published in the peer-reviewed scientific journal Aging in June 2019.[i]

The study investigated the effects of tea drinking on interregional brain connectivity within the default mode network (DMN), observed via structural and functional MRIs. Researchers focused on this area of the brain due to results of previous studies that have suggested the DMN is predominantly involved in cognitive disease[ii] and aging.[iii]

Older adults were recruited from residential communities in Singapore via door-to-door visits. Trained research nurses and psychologists assessed participants to exclude those who were terminally ill, or who had one or more health conditions including dementia, stroke, aphasia (difficulty with speech), marked hearing impairment, or any psychiatric or psychological problems. A set of neuropsychological and cognitive tests were also administered.

Ninety-three participants were identified from this initial wave of recruitment, with 36 adults, aged 60 and above, finally selected to participate in the randomized, controlled intervention trial.

Study subjects were questioned and assessed based on their frequency of consumption of green tea, oolong tea, black tea and coffee. Drinking frequencies of tea and coffee were rated on a categorical scale of 1 to 6, with 1 equating to never or rarely drinking tea and 6 equating to drinking tea three or more times per day. Participants were then stratified into two groups, with scores of 4 and above being assigned to the tea drinking group, and scores of 3 and below to the non-tea drinking group.

While coffee was acknowledged to be a beverage that could affect study outcomes due to caffeine being one of the main active constituents of tea, coffee consumption among the tea-drinking group and the non-tea drinking group was not significantly different between the groups.

MRIs Reveal the Health and Connectivity of Brain Regions

During the study period, researchers gathered data about participants' health, lifestyle and psychological well-being. Participants underwent neuropsychological tests designed to determine the health of specific brain pathways and were also subject to magnetic resonance imaging, or MRI, of the brain.

Analysis of these tests and imaging data showed that individuals who had consumed tea at least four times a week for around 25 years had brain regions that were interconnected in a more efficient way, a trait associated with healthier cognitive functioning. Study team leader, Assistant Professor Feng Lei, from the NUS Yong Loo Lin School of Medicine, explains:

He goes on to add, “Our current results [show] that the positive effects of regular tea drinking are the result of improved brain organization brought about by preventing disruption to interregional connections." The suppression of hemispheric asymmetry in the structural connectivity network was also observed as a result of tea drinking. In addition, functional connectivity strength within the DMN was greater for the tea-drinking group.

Researchers consider this the first study to provide compelling evidence of the positive correlation between tea drinking and healthier brain structure, suggesting a protective effect on age-related cognitive decline.

The majority of tea studies have relied on neuropsychological measures rather than neuroimaging measures, especially for interregional connections. They called for more research to better understand how specific brain functions such as memory emerge from brain circuits, and to identify additional interventions to preserve brain health as we age.

To learn more about the health benefits of tea, review the evidence of 692 abstracts with tea research compiled on GreenMedInfo.com's research database. 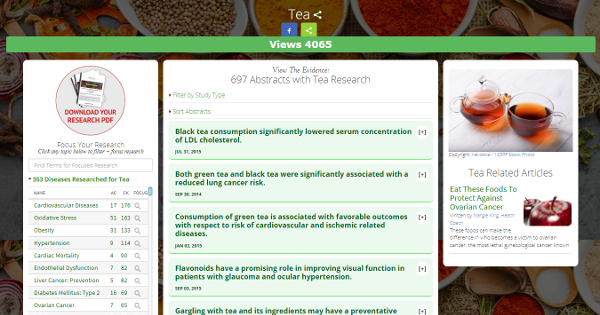