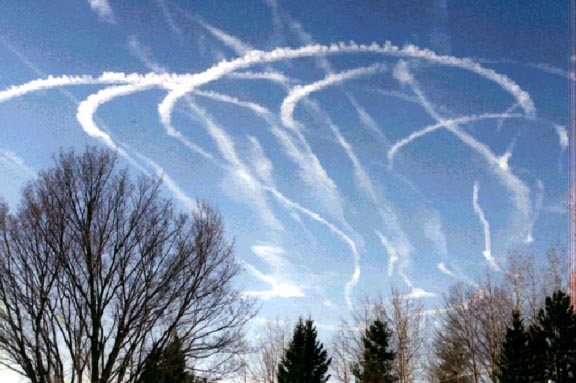 Often when the topic of "chemtrails" come up, the knee-jerk response is to view them as "conspiracy theory," owing to the fact that the evidence of our senses -- i.e. actually seeing them with our eyes -- is not considered evidence enough. We are made to believe that only Science, and its primarily excreta - peer-reviewed, published research - can vindicate eye witness or anecdotal accounts.

Those who debunk the notion that the increasingly prevalent 'persistent contrails' we see all around us contain anything other than water vapor and/or ice crystals, forbid their existence a priori, often claiming there is no substantiation from authoritative sources that #1: they exist, and #2: they contribute to illness.

What better place, therefore, than to look to the National Library of Medicine, the source and the "gold standard" for this much-needed "authoritative evidence" that aircraft are spraying anything of a chemical nature at all.

On MEDLINE the topic of "atmospheric aerosal spraying" does, in fact, come up. One author in particular suggests that chronic barium exposure and intoxication may be occurring from atmospheric aerosol spraying, done "for enhancing/refracting the signalling of radio/radar waves along military jet flight paths, missile test ranges, etc." He believes barium may be responsible for the high incidence clustering of multiple sclerosis and other neurodegenerative diseases such as transmissible spongiform encephalopathies (TSEs) and amyotrophic lateral sclerosis (ALS) in certain regions where it is a major environmental contaminant.

In a second article on the same topic the same author identifies Silver (Ag), Barium (Ba) and Strontium (Sr) and low levels of copper (Cu) as having accumulated in the food chain due, in part,  to "aerial spraying with 'cloud seeding' Ag or Ba crystal nuclei for rain making in these drought-prone areas of North America, the atmospheric spraying with Ba based aerosols for enhancing/refracting radar and radio signal communications..."  The bioaccumulation of these elements into the food chain can result in a neurodegenerative process that can be confused with transmissible spongiform encephalopathies (TSEs) of infectious origin.

Another study published in the journal Ecotoxicology and Environmental Safety in 2002, reports that "Over the last 25 years, several hundred thousand pounds of aluminized chaff have been released during flight operations over a training area on the Chesapeake Bay."  Another article, in the same journal the same year, states that "At least 500 tons of chaff is released annually during training within selected military operating areas in the United States." The article also describes the nature of the chemical being released in more detail:

Chaff is a radiofrequency countermeasure released by military aircraft, ships, and vehicles to confuse enemy radar. Chaff consists of aluminum-coated glass fibers ranging in lengths from 0.8 to 0.75 cm and is released in packets of 0.5 to 100 million fibers. The Department of Defense has determined that use of chaff in training is required for maintaining proficiency in the use of this countermeasure.

The authors also touch upon the related health issues

Concerns have been raised about impact on the environment and its potential toxicity to humans, livestock, and wildlife. Many of these concerns have been addressed or are being researched by the Department of Defense and other agencies, but much of the data are unpublished.

As one can now see, contrails are not the only explanation for the visible trails left by aircraft. Contrails, which are "the visible trail of streaks of condensed water vapor or ice crystals sometimes forming in the wake of an aircraft," generally do not persist very long, nor do they contain aluminum or barium. Although "persistent contrails" may form under certain natural meteorological conditions, they do not explain the criss-crossed patterning often observed in the skies throughout the world, nor the effects these discharges have upon surrounding clouds, other weather and the people exposed to fallout from them.

Knowing now that peer-reviewed and published research exists which reference aircraft spraying chemicals for either military or geo-engineering purposes, should move this debate from the realm of alleged "conspiracy theory" to that of intelligent debate and public inquiry.

Right now, nothing of the sort is possible. If you search sites like Wikipedia or online dictionaries for the term "chemtrail" you will get a redirect to another phrase you did not search for: "chemtrail conspiracy theory," as evidenced below...

For some of us, the question put to us increasingly by our own eyes is: what in the world are they spraying? In an investigative documentary by the same name, this question is thoroughly considered. Please watch it, if you are interested, and provide your comments/impressions afterwards below. Also, feel free to review our atmospheric aerosal spray page and bookmark it for future research updates.

For additional evidence for chemtrails view the video below....

Discovery channel program on the topic...