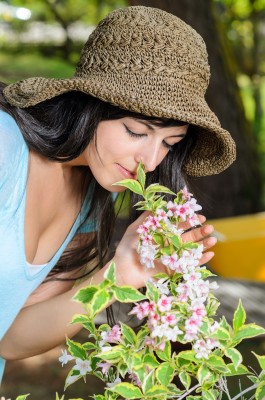 The health benefits of aromatherapy can no longer be considered placebo in nature. Accumulating evidence now shows that the fragrance of flowers and other volatile plant compounds pack a punch as powerful as certain drugs.

In a day and age like ours, bouts of stress and anxiety are expected to occur at least occasionally during the course of daily life. In fact, if the experience is completely alien to you, you may not be paying attention to what's going on in the world around us -- or, you may be enlightened, and should be congratulated.

Certainly, anti-anxiety drugs can be effective, but they are also addictive and dangerous, with withdrawal symptoms that include seizures and, paradoxically, extreme anxiety. Because of this fact, natural alternatives are needed now more than ever.

Fortunately, finding a non-pharmaceutical solution is no longer simply a matter of guessing, or relying solely on the anecdotal accounts of others. There is an accumulating body of pre-clinical and clinical research available today demonstrating the power, safety and effectiveness of natural compounds for relieving stress and anxiety. In fact, some of these substances do not even require being ingested, as they can be inhaled in exceedingly small doses to be effective.

For example, back in 2002, an amazing discovery was reported in the Japanese Journal of Pharmacology. Researchers found that the simple inhalation of patchouli and rose oil reduced sympathetic nervous activity by 40%, with rose oil reducing adrenaline concentrations by 30%.1

Such a profound reduction in fight-or-flight associated hormones is hard to accomplish through other non-toxic means. In fact, many folks use alcohol, tobacco and harder drugs, and even foods that contain opioid peptides, to self-medicate themselves down from the emotional cliff -- but not without a wide range of unintended, adverse health effects. All the more reason to appreciate the power of therapeutic fragrances.

In turns out that many flowers are well-suited to calm the human body and soul, bringing them back into greater balance. Lavender oil, for instance, has also been studied for the ability to reduce stress,2 anxiety, aggression,3and cortisol levels,4 among two dozen other potential therapeutic properties.5

Aromatherapy, of course, works primarily through the nose, but can also act through the lung and the skin. When inhaled, volatile aroma compounds from plants are capable of exerting direct-to-brain actions, primarily through the limbic and olfactory systems.  As opposed to the oral ingestion or topical application of a drug or herbal substance, aromatherapy usually offers a far higher margin of safety because the active compounds are small molecule.

Stress and anxiety are only two of 30 potential therapeutic applications that have been studied in connection with aromatherapy.

Others of note include:

View the rest of the research on GreenMedInfo.com here: Aromatherapy's Health Benefits.

Sayer Ji is the founder of GreenMedInfo.com. His writings have been published in the Wellbeing Journal, the Journal of Gluten Sensitivity, and have been featured and referenced widely in print and online.