'Evidence-Based' Medicine: A Coin's Flip Worth of Certainty

Views 17759
Posted on:
Friday, November 9th 2012 at 5:00 am
Written By:
Sayer Ji, Founder
This article is copyrighted by GreenMedInfo LLC, 2014
Visit our Re-post guidelines

What if 90% of the peer-reviewed clinical research, the holy grail of the conventional medical system, is exaggerated, or worse, completely false?

A seismic shift is occurring in the field of evidence-based medicine that a rare few are aware of, but which will (and likely already does) affect everyone, as the standard of medical care today largely follows from this model.

The very life's blood of 'evidence-based' medicine -- peer-reviewed and published clinical research results – which legitimizes the entire infrastructure and superstructure upon which conventional medical knowledge and practice is erected, has been revealed as mostly and patently false.

Case in point: in a 2005 essay, "Why Most Published Research Findings are False," and which is the most downloaded document of all time on PLoS, the Public Library of Medicine's peer-reviewed, open access journal, John P. A Ioannidis explains in detail how "It can be proven that most claimed research findings are false." And that "for many current scientific fields, claimed research findings may often be simply accurate measures of the prevailing bias."

The Atlantic published a piece on Ioannidis' work, back in 2010, titled "Lies, Damned Lies, and Medical Science," well worth reading, and which opened with "Much of what medical researchers conclude in their studies is misleading, exaggerated, or flat-out wrong. So why are doctors - to a striking extent - still drawing upon misinformation in their everyday practice?"

Ioannidis' work revealed that about half of the most highly regarded research findings within "evidence-based" medicine are either wrong, or significantly exaggerated:

[Ioannidis] zoomed in on 49 of the most highly regarded research findings in medicine over the previous 13 years, as judged by the science community's two standard measures: the papers had appeared in the journals most widely cited in research articles, and the 49 articles themselves were the most widely cited articles in these journals.

...Of the 49 articles, 45 claimed to have uncovered effective interventions. Thirty-four of these claims had been retested, and 14 of these, or 41 percent, had been convincingly shown to be wrong or significantly exaggerated. If between a third and a half of the most acclaimed research in medicine was proving untrustworthy, the scope and impact of the problem were undeniable. That article was published in the Journal of the American Medical Association.

Time magazine wrote about Ioannidis' findings the same year with a piece titled "A Researcher's Claim: 90% of Medical Research is Wrong" -- the title of which speaks resoundingly for itself.

Keep in mind that the 'gold standard' of the multi-trillion dollar conventional, 'evidence-based' medical model is the very research that Ioannidis now says is mostly false.  This model, which apparently thrives despite, or even because of, its falsity, largely determines what drugs are used, what surgical procedures employed, or conversely, what treatments can not be used, e.g. vitamins, spices, etc in disease prevention or treatment.  It also shields those who practice this dominant and only truly legally-sanctioned form of medicine against the potential calamity of moral, criminal, and financial liabilities it is responsible for– that is, as long as the truth continues to remain buried.

How many folks, for instance, are aware that the Cochrane Database Review on preventing influenza in healthy children with flu vaccines shows that the evidence proving their safety and effectiveness in children under two (the population most susceptible to vaccine-induced injuries) is conspicuously lacking? Why would anyone question the rationality of vaccinating infants and young children against influenza when the CDC and FDA presents it as unequivocally safe and effective? As the review states:

It was surprising to find only one study of inactivated vaccine in children under two years, given current recommendations to vaccinate healthy children from six months of age in the USA, Canada, parts of Europe and Australia. If immunization in children is to be recommended as a public health policy, large-scale studies assessing important outcomes, and directly comparing vaccine types are urgently required.

Or, among the the tens of millions of Americans taking statin drugs for the primary or secondary prevention of cardiovascular disease, who among them realize that there are well over 300 adverse health effects documented in the scientific literature itself associated with the use of this chemical class of medications, including the weakening and damaging of the heart muscle?

Sadly, examples like these may be the rule and not the exception.

Evidence-based medicine (EBM), of course, is founded upon an epistemological power structure arranged hierarchally like a pyramid. The 'quality of evidence' determines whether or not something can be said to be true. On the lowest tier, the 'base' of this pyramid, is the Anecdote, considered worthless, encompassing many folk medical systems employing food and plant medicines and still used by the majority of the word as their primary care system, followed by: Cell Studies > Animal Studies > Human Studies > Clinical Trials > Meta-Analyses and Systematic Reviews of Clinical Trials.

This model assumes, in the characteristically Napoleonic style, that what it does not officially confirm as being true, is not true. Herbs and vitamins, for instance, are almost never considered to be "evidence-based" and credible because they have not run the gauntlet of prerequisite clinical trials required for them to be verified as therapeutic within this model. The fact that our bodies, for instance, require vitamin C in order to be alive, is not evidence enough to support the concept that it may be valuable to take it supplementally at doses beyond the recommended daily value (which may keep you only a few milligrams above starvation/deficiency values). 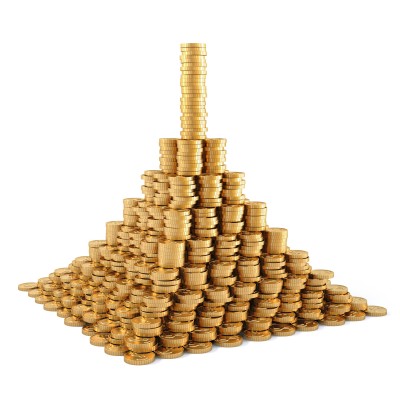 The fact is that human clinical trials can cost millions of dollars, and that in order to prove the value of a potential FDA-approved medicine, it must be taken through phase 0, phase I, phase II and phase III clinical trials (which, taken together, cost on average $804 million). The 'gold standard' of evidence-based medicine therefore betrays the aphorism: "those who own the gold make the standard."  By principle, therefore, all natural substances, which do not lend themselves to being patented because they do not grant the manufacturer exclusivity, will never attain FDA approval as legitimate medicines.

While the conventional medical system can claim this is because they lack "evidence" for safety and effectiveness (despite the fact that Turmeric, for instance, has thousands of years of use by millions of folks as a food and medicine), the reality is that they only lack "evidence" because they cannot be effectively monetized and controlled as proprietary instruments of medical power.

Ultimately, Ioannadis' findings reflect an inborn and potentially fatal error at the very heart of modern science itself: namely, a tendency towards scientism.

Scientism is the idea that natural science is the most authoritative worldview or aspect of human education, and that it is superior to all other interpretations of life. Furthermore, scientism accepts as real and valid only those things which it can confirm empirically; those things it does not or cannot confirm it is skeptical about, e.g. homeopathy, the existence of the soul, an innate intelligence in the body, or worse, outright denies as unscientific, or "quackery."

For instance, a fundamental assumption of all scientific inquiry is that things are made of "real, hard objects," i.e., the computer I am typing at is a conglomeration of atoms. But wait, quantum mechanics, which peers deeper into the illusion of materiality, revealed that what subtends the illusion of macroscopic things is a subatomic realm better described as comprised of fields of possibility, where particles can be at two places at once, or communicate faster than the speed of light (non-locality), etc, basically violating all the fundamental laws considered inviolable on our everyday level of macroscopic perception. So, in many ways, the deeper you take the scientific investigation, the less firm a footing you have on what really is real, and what you think you know.

Also, scientism – this false sense of certainty in knowing - leads inevitably to medical monotheism: the belief that there is only one true and right way to prevent and treat disease, and that all disbelievers are intrinsically inferior and treated as either uneducated, insane, or as heretics, to be prosecuted to the fullest extent of the law.

This is how we arrived at our present day pseudo-scientific medical dictatorship.  I say pseudo- because insofar as science means an attempt to discern the truth without bias, it is a human faculty, a yearning of the soul, a constant challenge we must meet each and every moment we try to figure something out.  Science is not a "brand," a "possession," an exclusive faculty of a caste of scientific elite, dispensed solely through monolithic institutions.  It can not claim to deny anything and everything it does not explicitly confirm without being an organ and instrument of fascism, control, divisiveness and institutionalized and compulsory ignorance and myopia.

Natural medicine, by principle, will never attain legitimacy within the present power structure. The money simply will not flow in the direction of uncovering, or simply confirming its time-tested, multi-culturally confirmed and often obvious power to heal with food and otherwise natural substances and interventions -- that is, beyond the sizable body of preclinical research which we have gone to great lengths to collect and index for you on Greenmedinfo.com.

These limitations, however, are being overcome as we speak. The revelation that the 'evidence-based' monopoly on the truthTM is itself not based on evidence, in perhaps a majority of cases, has world historical implications. Perhaps we would do equally well for ourselves if we went back to our intuition, drawing from ancient dietary and natural medical practices to take back control of our health. For example, asking ourselves "how do I feel?" is no less vital a question than "what is my LDL cholesterol number?" Certainly, in the first case the answer is immediate, and not up to debate. After all, is the evidence of our first-hand experience any less valid than a Merck funded, multi-million dollar drug trial? It is simply a matter of whether we choose to stand firmly in, or loosely give away our power in exchange for the narcotic of blind faith in a conventional medical system, whose credibility as a system designed to discover and apply empirically-confirmed truths (assuming the work of Ioannidis is accurate) already departed long ago.