Explosive New Evidence Confirms Kevin Folta Consulted for Bayer, Despite All his Denials

The veteran science reporter and former NYU and University of Boston adjunct professor of journalism Michael Balter has launched a scathing series of attacks on the University of Florida’s Kevin Folta, a leading defender of GMOs and glyphosate. As part of this, Balter has posted documentary evidence of the terms of Folta’s private work for the biotech giant Bayer, and it blows apart Folta’s assertions that he has not done paid consulting.

Kevin Folta has always denied doing any consultancy work for Bayer. Indeed, his University of Florida funding page said that paid consultancy was something he declined to do. It was only after his then wife publicly accused him of “trying to hide” consulting work for Bayer that a new statement quietly appeared on his funding page – beneath the statement about declining paid consulting. This read “Expert Witness: In May 2018 Folta provided expertise in analysis of data for a German law firm…. He was compensated for his time.”

But Folta remained adamant that this private work (a) was not consulting and (b) was not done for Bayer. And he stuck to that even when his former fellow directors at Biofortified disassociated themselves from him after making a freedom of information request to the University of Florida that they said led them to conclude he was lying about this issue.

So who’s the liar?

Folta responded emphatically to Biofortified: “Shame on you.... This was not consulting. Period.” And he has continued to maintain this stance on social media, asserting, “I was not doing consulting for Bayer”; that the work he had done was only “for a German law firm ... It was not ‘consulting for Bayer’”; that it “was not a consulting gig”; and that although his then wife had said he was “consulting for big bucks. I was not.”

More recently, when Michael Balter tweeted that “Folta has received funds from both Monsanto and Bayer ($600/hr consulting)”, Folta angrily shot back, “No Michael, you are a liar as usual. I… never did ‘consulting’ for Bayer.”

But Michael Balter has now posted the actual letter from the law firm Clifford Chance to Folta, which sets out the work that Folta was retained to do. This shows the work relates to Bayer, was authorised by Bayer, and was to be paid solely by Bayer – and that the law firm acting for Bayer classified that work as “consulting”.

Some curious aspects of the consulting letter

The letter (see image at top of this article) says, “Bayer CropScience AG has authorized us to retain you as a consulting and potential testifying expert at your customary fee of USD 600 per hour, plus reasonable expenses that you may incur. Please send your bills to me and I will forward them to Bayer CropScience AG, who will be solely responsible for the payment of your fees and costs.”

Given that Folta has claimed that he declined doing paid consultancy, the law firm’s reference to “your customary fee” is interesting, as it seems to suggest that $600 per hour is a rate he routinely charges for such work.

Michael Balter has drawn attention to another interesting aspect of the letter which is that it is not addressed, as you might expect, to Folta’s workplace at the University of Florida, nor to his then home address, but to what Balter says was the private home address at the time of Folta’s then secretary, Lisa Tomlinson. Balter asks, “What was Folta trying to hide by having the paperwork sent to his secretary’s house?”

Curiously, when Balter contacted Tomlinson, he says she denied Folta ever had his mail sent to her private address, but was unable to explain why the letter retaining him as a consultant was addressed there.

It’s also worth noting that this letter, retaining Folta for Bayer-paid consulting, was sent in May 2017. Yet at the beginning of May 2018, his University of Florida funding page still said, “To date, Folta has declined opportunities for paid consulting.” In late May 2018 the statement appeared about the “Expert Witness” work in “May 2018”, but it seems more than surprising if, having been retained to do that work a full year earlier, Folta had done absolutely nothing in the meantime.

We should also bear in mind his then wife’s statement on her blog in February 2018: “He has done consulting work in 2017 for Bayer… and even if the consulting is not finished, he already has billable hours to date.” Although Folta responded by dismissing what she had to say as “garbage” and calling her “truly evil”, in the light of the date on the Clifford Chance letter, her statement looks very plausible.

Michael Balter has also posted an invoice from Folta to Bayer for expenses in March 2018, and although it might relate to something other than the consulting he was retained for, it confirms that direct billing and payments have been occurring between Folta and Bayer.

According to Balter, in total Folta “made about $200,000” from consulting for Bayer. Balter also suggests Folta has held stock in both Bayer and Monsanto, which Bayer now owns, despite his many protestations of having no vested interest in the companies whose products he so vigorously defends. Although Balter has not yet revealed what evidence he has for this, when Folta attempted to deny having any significant holdings of this kind, Balter said “you are lying” and even challenged Folta to “sue me and let's let legal discovery establish what stock you own".

When the journalist Paul Thacker recently referred to Folta as a “Monsanto third-party scientist”, Folta retorted that he had no “interest in Monsanto”. If Balter is correct, then Folta has had a direct interest through significant Monsanto/Bayer stockholdings, plus has benefitted from a six-figure consultancy payment from Bayer, the company that owns Monsanto. All of which constitutes a massive undeclared conflict of interest (COI) – a COI that he even failed to declare in a paper he published on GMO crops in March 2018, ten months after he had been retained for consulting on behalf of Bayer.

No wonder that the well known bioscientist Michael Eisen has commented: “I am the last person anyone would accuse of being an anti-GMO activist, but Folta has completely lost my trust because of his repeated cover-up of industry funding and his complete disdain for why it matters.” 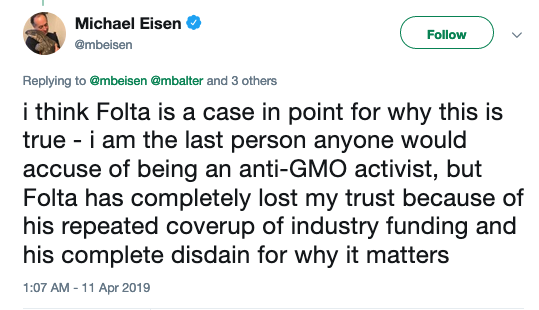 Eisen also recently said, “I unequivocally condemn Folta for not being upfront about his clear COI.”

Yet Folta has claimed in the past to be setting “a new standard for science transparency”, and has said his watchwords are “omission impossible”, when it comes to financial matters, because, “If we are going to talk about championing science in an open and honest fashion, we need to be sensitive to the fact that everyone involved wants to know every last detail.” Folta has also repeatedly called himself “100% transparent”.

Michael Balter has now posted the two documents on his blog under the heading: Proof that University of Florida plant scientist Kevin Folta lied when he claimed to colleagues and on social media that he had not consulted for Bayer (plus everything else you need to know about one of the most dishonest, conflicted individuals in science).

The veteran science journalist, who has published over 800 articles in the journal Science alone, told us, “I and other science journalists are focused on Folta not because we are ‘anti-science’, as he claims, but because he and other scientists who work for industry behind the scenes corrupt the process of scientific discussion and debate. It’s the worst sin in science, to pretend that one is being objective in evaluating science when in fact you have a conflict of interest that you have hidden away… or tried to!”

GMWatch is an independent organisation that seeks to counter the enormous corporate political power and propaganda of the biotech industry and its supporters. We do this through our website, our lists, our Powerbase portal, LobbyWatch, the BanGMFood campaign, social media, and other outreach and campaigning activities.