The Failure of GMO Cotton in India 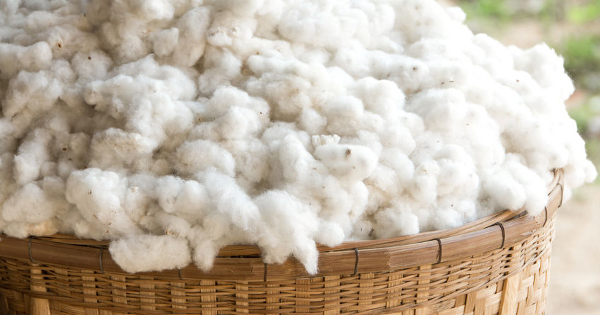 Grand claims are often made for GMO Bt cotton in India. Proponents point to increases in national cotton production, while Dr. Ramesh Chand of the Indian Government think tank Niti Aayog recently told BloombergQuint "there is no credible study to show any adverse impact of growing Bt cotton in the last 18 years in the country…"

The Chand interview occurred at a promotional event for a new book titled Socio Economic Impact Assessment of GM crops: Global Implications Based on Case Studies from India. Its publisher is the Delhi-based Research and Information System for developing countries (RIS), a policy research think tank in the Indian Ministry of External Affairs.

Dr. Chand and much of the RIS volume cite the presumed grand success of Bt cotton as a template for introducing GMO (and gene editing) technologies in other important Indian crops such as mustard and brinjal (eggplant).

The opinions of Niti Aayog and RIS representatives are highly significant given their deep links to Indian policy makers. Yet how Chand came to such positive conclusions is a great mystery to us.

The true measure of how well farmers are doing should be scale neutral: yield and total net income per hectare are more appropriate metrics than national production. In addition, proper accounting requires the costs of ecosystem and biodiversity losses also be considered.

When viewed from such a perspective, the failure of the ecologically and socially unsustainable Bt cotton system becomes apparent. It is based on a dystopian relationship between those who control and sell the inputs and the vast majority of farmers who, with less information and resources, attempt to implement them. And not least of this are the often questionable methods for gaining registration for GMOs (e.g., Pental 2019 and the reply by Gutierrez et al. 2020).

The problems of GMO Hybrid cotton

In contrast to the claims of Dr Chand and the RIS publication, our investigations of Bt and hybrid cotton clearly show:

1. Hybrid cottons unique to India were introduced in the mid-1970s purportedly to increase yield and quality. But even before the GMO Bt trait was introduced in 2002, hybrid seed was considerably more expensive. Hybrid plants also require more fertilizer and stable water, and hybridity prevents seed saving and replanting. Thus hybrid technology serves as a value capture mechanism requiring annual purchases of seed (Gutierrez et al. 2015; in press). Even the meager increases in yield which resulted were associated with increased fertilizer use (Kranthi 2016; Kranthi and Stone 2020).

3. Pre-2002, insecticides were used to control the key pest, the native pink bollworm (PBW), in long season hybrid cotton. As occurred worldwide, insecticide use caused ecological disruption that in India induced outbreaks of secondary insect pests (i.e. normally non pests) like the highly damaging "American" bollworm (and others). Farmers were spending money on insecticides to lose money due to insecticide-induced pests. To solve the PBW and insecticide-induced American bollworm and other induced moth problems, hybrid GMO Bt cotton was introduced starting in 2002. (Though illegal Bt seed was introduced in Gujarat before 2002.)

4. While the Bt technology initially solved the bollworm problems, outbreaks of secondary pests not controlled by the Bt toxins began to occur, again increasing insecticide use in Bt cotton. By 2013 pre-2002 levels were surpassed. This caused ecological disruption and induced outbreaks of still newer secondary pests (whitefly, jassids, mealybug), and increased levels of resistance to insecticides. By 2013, Indian farmers were solidly on both the insecticide and biotechnology treadmills. And yet, some technologists still propose that developing pest issues could be fixed with still further biotech fixes - a proposal akin to a technological dog chasing its own tail. Data on points 1-4 are depicted in Figure 1.

5. Bt cotton did not increase yields, but did contribute to increased cost of production (Figure 2), all in the face of stagnant yields (see Figure 1) leading to economic distress. 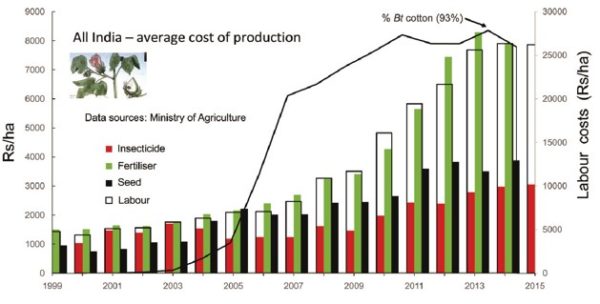 7. High density, short season (HD-SS) NON-GMO pure line rainfed cotton varieties have been developed in India that could double yield (Central Institute for Cotton Research (CICR) data; Figure 4) and triple net income. The average yield of the current hybrid varieties in Maharashtra is shown for comparison. The obvious question is - Why haven't these varieties been developed and implemented in the field?

8. The potential exists for development of even higher yielding HD-SS non-hybrid non-GMO varieties in India; varieties that would allow seed saving by Indian farmers.9. Incorporation of hybrid and Bt technologies in HD-SS cottons would not give economic benefit because there would be no increase in yield, seed cost would be 6-8 fold current costs, and rainfed HD-SS varieties would avoid infestation by the key pest pink bollworm obviating the need for the Bt technology (see Gutierrez et al. 2015).10. Resistance to Bt cotton in pink bollworm is now widespread in India, and resistance to insecticide in many pests is increasing (Kranthi 2014; Naik et al. 2018).

By nearly all measures, hybrid Bt cotton in India is a failure, or at best very suboptimal for farmer welfare. Despite increases, Indian yields are no more than some of the poorest African countries which do not cultivate hybrid cotton or Bt-cotton. In 2017, 31 countries were ranked above India in terms of cotton yield (i.e. kg ha-1), and of these, only 10 grew GMO cotton (Kranthi 2014).

So why is hybrid Bt cotton falsely used as an example of a grand success, and why should it be used as a template for implementing the hybrids, GMOs, gene editing and other technologies in other crops - especially food crops? Why have legitimate concerns been ignored about the loss of biodiversity and of the irreversible GMO contamination of indigenous crop varieties and wild species? Why has the emphasis been on GMO development when viable alternatives are available but remain largely unexplored?

If anything is to be learned from the template of Bt cotton it is that much of biotechnology in agriculture is an exercise in linear thinking, of reductionism, and of unexpected consequences. There is instead a need to use caution and back up any decisions that affect the food and nutrition security of over a billion people with strong science and farmers' knowledge and experience (IPES-Food 2016). Added to this should be an understanding of the possible conflicts of interest at play. Anything less will be to the detriment of the Indian agricultural sector, the public, and the Nation.

IPES-Food. 2016. From uniformity to diversity: a paradigm shift from industrial agriculture to diversified agroecological systems. International Panel of Experts on Sustainable Food systems.

This article is based on an open letter to Niti Aayog

Andrew Paul Gutierrez FRES is Senior Emeritus Professor in the College of Natural Resources at the University of California at Berkeley. He was founder of the University of California Integrated Pest Management Program and Associate Director of the National NSF/EPA/USDA IPM Projects. He has 40years of experience working on cotton globally. He is CEO of the Center for the Analysis of Sustainable Agricultural systems (CasasGlobal.org) with ongoing research programs globally on various crop systems.

Hans R. Herren received the World Food Prize (and others awards) for his leadership of the hugely successful project on the biological control of cassava pests in sub Saharan Africa; he is President of the Millennium Institute, Washington DC (USA) and of the NGO Biovision, Zurich, Switzerland and a Foreign Associate of the US National Academy of Sciences. He has global experience in diverse agricultural systems.

Peter E. Kenmore is a MacArthur Fellow (Genius Award) for his work on IPM in green revolution rice, former head of FAO/Plant Protection, and former FAO Ambassador to India. Kenmore was the founder of the internationally renowned Farmer Field School program in Asia.