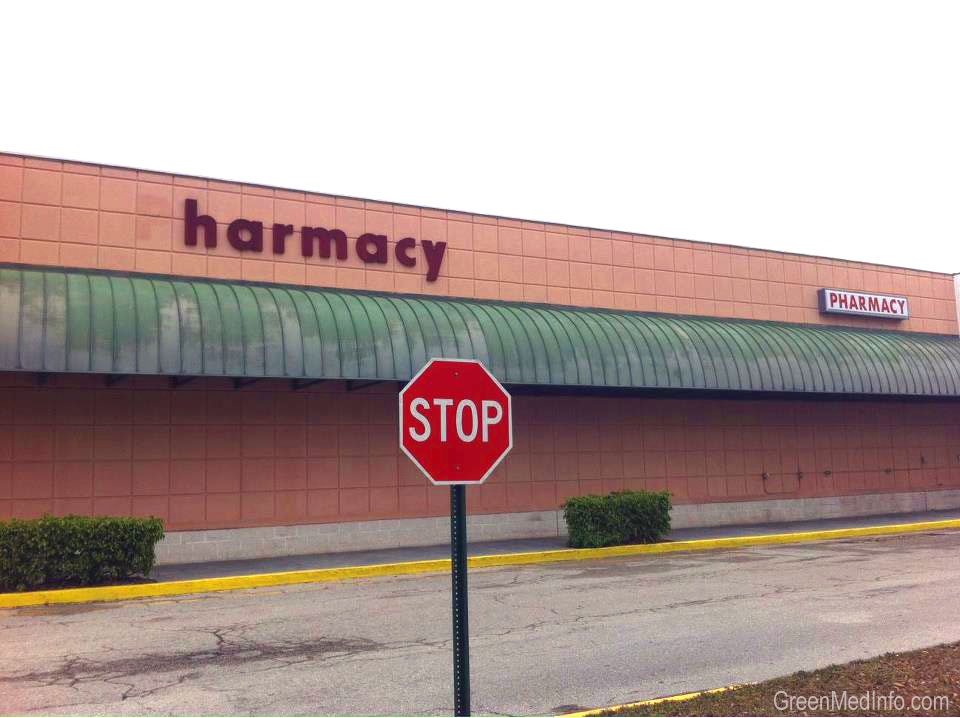 I snapped this picture on the way to the grocery store the other day, and was struck by how perfectly the 'thousand words' it spoke matched up with my opinion on what people should do if ever they are tempted to visit a pharmacy for anything other than necessary items, such as a nail file or diapers, namely: STOP!

Why am I so repugnant to the concept of frequenting these dispensary institutions? The fact that they not only sell cigarettes, but feature them at the front counter, forcing those who may actually need a pill or two to hobble all the way to the back to fetch them, figures somewhere into my sentiment.  The fact that they are proliferating like metastatic nodules in any area with a population sufficiently sick and/or over-medicated enough to support one (and sometimes two!) on each and every block, has something to do with the way I feel as well.

But are the pharmacies really to blame? They largely fill orders placed by...

Ok, so we have billions of pounds of synthetic chemicals consumed every year as patented drugs, with an army of degreed, licensed and doctored foot soldiers prescribing them recklessly under the once great banner of "medicine," in an ongoing war against the body's virtually infinite capability to generate symptoms, most of which are – ironically – attempts to heal from acute or chronic exposure to synthetic chemicals.

This situation didn't happen overnight, mind you. Over 250 years ago, Voltaire penned these words, which still ring so true today:

Really, the modern day physician has transmogrified into a technician of the body-as-machine (a 500 year old, dead "Cartesian" concept, mind you), and is practicing what can best be described as a glorified form of applied pharmacology.

While administering xenobiotic chemicals to people is a valid discipline, with life-saving potential in extreme cases where a poison is needed to whack an over-stimulated system back away from the edge of self-destruction (which is why mercury and lead were used as medicines in ancient times, as well), applied pharmacology is not medicine, which is to say a discipline concerned with the healing of the body, or better yet, facilitating bodily self-healing; nor is the doctor any longer an educator, rather, more a well-paid appendage of the global fine chemicals, biologics and pharmaceuticals industries, directing the secretion of their product in such a way as to maximize profit, limit liability, and suppress the patient symptoms without (hopefully) killing them in the process.

So, where does that leave us? The amorphous, unlicensed, non-expert, mass of lay-persons, who by virtue of bodily incarnation will at some point or another need to address and/or resolve a symptom of disease, but who do not have the wherewithal, or even a legal right to make treatment decisions for themselves, (e.g. medical marijuana) or their loved ones (e.g. mandatory vaccines & chemotherapy).

The Physician As The Priest of the Body

Most of us, either from the moment of birth (usually in a hospital, and not the ideal way: at home with a midwife), or from infanthood onward, are enculturated to perceive the medical doctor as the "priest of the body," solely capable and legally empowered to determine the course of life and death, both in times of health and mortal illness. Indeed, the original meaning of the word doctor comes from "Church father" (medieval French) or "religious teacher" (Latin), and still today, they elicit an unquestioning faith in their authority that defies reason, especially considering how many patients they kill from correctly prescribed medicine each year -- 106,000 a year, according to a 1998 meta-analysis published in JAMA.

The modern-day drug-based medical dictatorship and its overarching power structure has a cult-like hold on those who take its two most lauded sacraments: the pharmakeia (Greek word behind pharmaceutical meaning "pill, potion, charm, sorcery, sacrifice, poison"), and ritual vaccinations.

I believe the best way to break the spell is by using the holy grail of the conventional medical model itself, namely: the peer-reviewed, published "scientific evidence," and particularly those studies which support natural approaches to disease prevention and treatment; and by using that information, both to inform our choices, as well as defend them when they are under intellectual or regulatory assault., we can continue to choose foods, spices, herbs, fresh air, exercise, good company, laughter, etc. as our health care without the specter of scientism or medical monotheism forcing us into its drug- and injection-based model of compulsory treatment.

GreenMedInfo.com exists primarily in order to index, aggregate and disseminate the positive findings on natural – farm-acological – substances that can be found within the ocean of research produced by the biomedical research and publishing industries, whose primary funding sources are Big Pharma, and its handmaiden, world governments, who are increasingly co-opted by billions of dollars of lobbying money, and who are now populated by an army of their former executives, business employees and partners.

World governments, in fact, have even underwritten the risks associated with the countless vaccine-associated injuries that occur every year by virtually eliminating the liabilities of the manufacturers, and those public and private organizations that aggressively promote their use; this, despite the glaring lack of evidence for their purported effectiveness. Private insurers know the epidemic of vaccine-associated injuries is so extensive (e.g. autism) that they stand to lose everything for betting on that horse.

So, considering that YOU have paid for the research, both through government taxation, and the exorbitantly high drug mark-ups (cancer drugs may be as high as 500,000% from cost) that increasingly defraud the public both of their health and their wealth, it is only fitting that you take ownership of it.  In the mad rush to find "lead compounds" from natural sources in order to develop patented, synthetic analogues, Big Pharma has generated – inadvertently – a mountain of evidence supporting the value, if not also the superiority of natural substances vis-à-vis their would-be drug equivalents.

Take our cancer research page, as an example. We have indexed 2600 studies straight from the public domain (NLM's Medline) on the anti-cancer activity of over 600 natural substances. Remarkably, some of these have potent activity against drug and multi-drug resistant cancers and cancer stem-cells, which are at the root of why modern chemotherapy and radiation treatments not only fail but cause greater malignancy post-treatment.

Were any of these compounds patentable, they would likely have received attention, and some the requisite 800+ million dollars of funding needed to produce the multi-phased human clinical trials the FDA requires before considering drug approval. The fact that the MONEY, and not the intrinsic potential of  a substance to heal, determines whether it will be brought to market, that is, be used to alleviate the suffering of the sick, is a disturbing fact.

Ultimately, it is to our gardens, our spice racks and local markets that we must go to obtain, maintain and sustain our health. We hope that the 19,000 study abstracts on our site, which are available for everyone to view in their entirety, will encourage people to see that farmaceuticals and not (p)harmaceuticals are the future of medicine, if there is to be a future to medicine. Please share the research housed on GreenMedInfo.com with others in need, so our work will not have been performed in vain. Also, if you have not already, please take a look at our turmeric research below for a better understanding of what our project is all about...