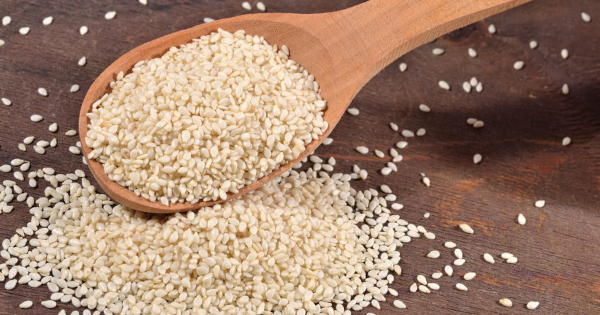 Here are five compelling, science-based reasons why your diet shouldn't miss out on sesame seeds -- be they roasted, soaked or sprouted -- beyond the occasional sprinkling and added texture on your burger bun

In Ali Baba and the Forty Thieves, the legendary phrase "open sesame" opens the mouth of a cave where a treasure lies hidden. Besides actually being derived from the plant, the phrase applies to sesame in the modern world, revealing a world of benefits for human health and well-being.

Sesame seeds are a reservoir of nutrients, including important vitamins and minerals, phytosterols, polyunsaturated fats, tocopherols and lignans such as sesamin and sesamolin.[i]

The presence of lignans, as well as tocopherols and phytosterols, protects against reactive oxygen species as well as keeps the oil from easily becoming rancid. In fact, sesame has earned the title "Queen of Oilseeds" because it is highly resistant to oxidation and rancidity.

Sesame seed in particular boasts of excellent nutritional value, including high protein, vitamin B1 and dietary fiber content.[ii] Southern Indian cuisine relies on sesame oil for cooking, just like Chinese cuisine where it was the only cooking oil until fairly recently.

The seed can be consumed raw or roasted. Here are five reasons to consume sesame seeds and make them a part of your regular diet.

A sesame-rich diet can help address atherosclerosis by controlling inflammation and regulating lipid metabolism.[vi] Atherosclerosis has been recognized as a chronic inflammatory condition.

A 2020 study also concluded that sesame oil has anti-inflammatory properties, suggesting a favorable role against inflammation in ulcerative colitis.[vii]

Osteoarthritis is the most common culprit behind joint pain, frequently affecting the knees. Arthritis may be various factors coming together, such as inflammation and oxidative damage to the cartilage tasked with cushioning the joints.[ix]

In a study out of Tabriz University of Medical Sciences in Iran, researchers evaluated the effects of sesame seed supplement on clinical signs in knee osteoarthritis patients.[x] They divided 50 subjects with knee osteoarthritis into two groups, with one group receiving 40 g of sesame seed daily for two months along with standard drug treatment and the other getting 40 g of placebo powder along with standard medical therapy.

At the end of the trial, the sesame seed group showed significant decreases in markers of inflammation and oxidative stress. The researchers suggested sesame may benefit knee osteoarthritis patients and offer complementary treatment in this cohort. In separate research, sesamin was found to have anti-inflammatory and antioxidant action, potentially protecting your cartilage.[xi]

Growing evidence shows that sesame seeds may help protect against diabetes. Here are some relevant studies:

Sesame seeds are a rich source of phytoestrogens or plant compounds similar to estrogen, potentially benefiting women in menopause, whose estrogen levels drop.[xvii] This makes them likely helpful for women at this life stage; phytoestrogens, for instance, may help control hot flashes and other signs of low estrogen.[xviii]

These compounds may also assist in pushing down the risk of cancer during menopause, such as breast cancer.[xix],[xx] You can learn more about the impressive health benefits of sesame seeds on the GreenMedInfo.com database. 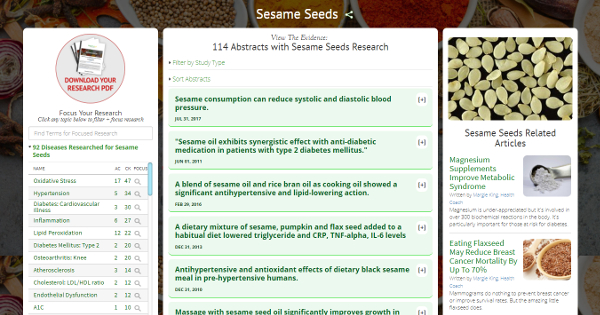