Five Reasons for Men to Use Saw Palmetto Berry 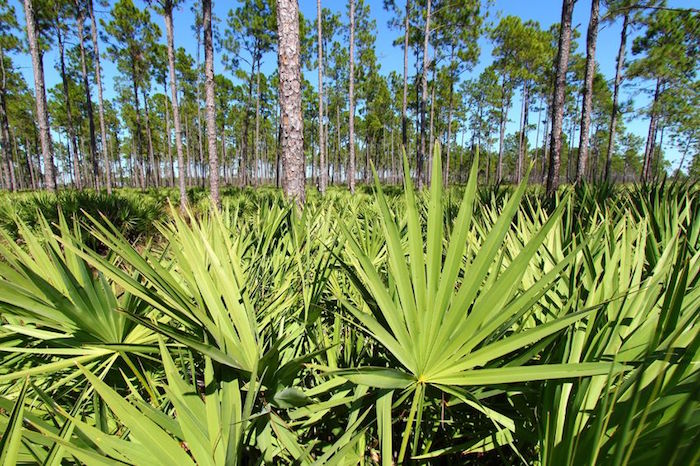 Saw palmetto berry has been shown to be safer and more effective than drugs when it comes to benign prostatic hyperplasia, as well as other issues men may face

Benign prostatic hyperplasia (BPH), or enlarged prostate, will affect more than half of all men in their lifetime and 90% of all men over 85.

BPH causes frequent urination, including during the night, increased urgency and decreased force. It can lead to urinary tract infections and infections and damage in the kidney.

An important cause of BPH is the increased conversion of testosterone into dihydrotestosterone (DHT), which is about five times more powerful than testosterone. But BPH is often over simplistically described as resulting solely from that conversion. But, if it did, saw palmetto berry would not be the best treatment for BPH. So it doesn’t result from that single cause, because saw palmetto is the best treatment for BPH.

Saw palmetto berry is the single best treatment for BPH. And it does effectively lower DHT in prostate cells. Saw palmetto impressively lowers prostatic DHT by 32%-68% (Urology 2001;57:999-1005; Prostate 1998;37:77-83). But the BPH drug finasteride (Proscar) lowers it by as much as 80%. So, since saw palmetto is more effective for BPH than finasteride, there must be more to BPH than just the conversion of testosterone to DHT.

The Many Causes of BPH & The Many Actions of Saw Palmetto

There are many contributing causes to BPH. Important possible contributors include increased conversion to DHT, increased binding of DHT, elevated ratio of estrogen to testosterone, inflammation, elevated insulin and obesity. Saw palmetto probably outperforms the pharmaceutical treatments because it addresses more of these causes than just conversion to DHT.

Saw palmetto not only reduces the production of DHT, it also blocks its attempts to bind to prostate cells (Urologe 1994;334:90-5). Saw palmetto has also been proven in double-blind studies to reduce estrogen receptors in men with BPH (Eur Urol 1992;21:309-14). And it has also been shown to be antispasmodic and anti-inflammatory.

The inflammation of BPH may be caused by infection. There is a strong association between BPH and prostatitis, inflammation of the prostate, possibly caused by bacterial infection (J Steroid Biochem Mol Biol 2008;108:254-60). Saw palmetto has recently been shown to help bacterial prostatitis (Arch Ital Urol Androl 2013;85:190-196).

So, saw palmetto has a wide range of activity across many of the causes of BPH. And that likely explains its superiority over the drugs.

In the first head-to-head study between saw palmetto and finasteride, the herb proved itself to be just as effective as the drug (Prostate 1996;29:231- 40). In the rematch one year later, the herb actually beat the drug (Phytomed 1997;3:309-13). In 1998, the Journal of the American Medical Association reviewed the research and ruled that saw palmetto berry is just as effective as finasteride (JAMA 1998;280:1604-9).

Finasteride has been replaced by the newer alpha-blockers as the most prescribed BPH drugs, but the results compared to saw palmetto berry are the same. Saw palmetto is as effective as Flomax (tamsulosin) (Eur Urol 2002;41:497-506). In fact, an analysis of a subset of 124 people in that study with severe symptoms found that saw palmetto is superior to tamsulosin in severe BPH: International Prostate Symptom Scores (IPSS) went down by 5.8 points in the drug group but by 7.8 points in the herb group (Eur Urol 2004;45:773-80).

Though there has been one negative study of saw palmetto, a meta-analysis of the research has found that the herb significantly improves urine flow, nighttime urination and IPSS (BJU International 2004;93:751).

Several other drug comparisons have shown saw palmetto berry to be as effective as a variety of drugs, ranging from slightly less effective to more effective.

A recent study once again compared saw palmetto to tamsulosin. The 6 month study gave either .4mg of the drug or 320mg of the herb or both to 265 men with BPH. IPSS scores decreased equally and significantly in all groups and urine flow increased significantly in all groups, showing, once again, that saw palmetto is as effective as the leading drug and that the combination is no more effective than either is alone (Vojnosanif Pregl 2013;70:1091-6).

2. Saw Palmetto is Safer than the Drugs

Pharmaceutical drugs for BPH have a number of side effects, including erectile dysfunction. Studies consistently give the advantage to saw palmetto berry over drugs because of superior safety.

The head-to-head studies with finasteride found saw palmetto berry not only to be as good or better for efficacy but also to be safer, producing fewer side effects, including erectile dysfunction (Prostate 1996;29:231-40; Phytomed 1997;3:309-13). The JAMA review found saw palmetto berry to cause an impressive 90% fewer side effects than finasteride.

When sixty-nine men were given 320mg of saw palmetto berry extract a day for eight weeks their BPH symptoms improved by 50%. That’s not news. The big news in this study was that their sexual function improved by an average of more than 30%.

Because of the herbs effectiveness and this important benefit over the drugs, the study’s authors recommend saw palmetto berry as the first line treatment of mild to moderate BPH (Phytother Res 2012 doi:10.1002/ptr.4696).

As an extra benefit, saw palmetto may also help prevent balding. Nineteen men with mild to moderate androgenetic alopecia, better known as male pattern baldness, were given either a placebo or 50mg of beta-sitosterol and 200mg of saw palmetto berry extract (85-95% liposterolic content) twice a day for an average of 4.6 months. In the treatment group, 60% of people were improved versus 11% in the placebo group. On the men’s self-assessment, 33% of the placebo group versus 0% of the treatment group experienced a worsening of their balding (J Altern Complement Med 2002;8(2):143-152).

For additional research on the health benefits of saw palmetto, visit the GreenMedInfo database on the subject. 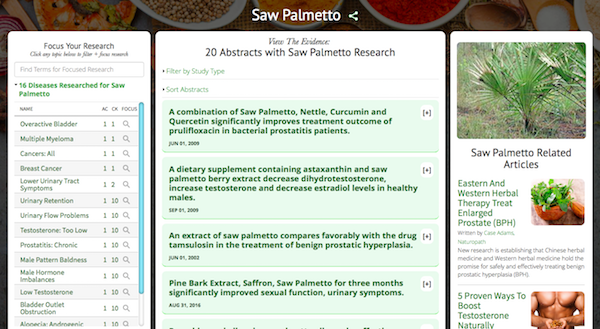