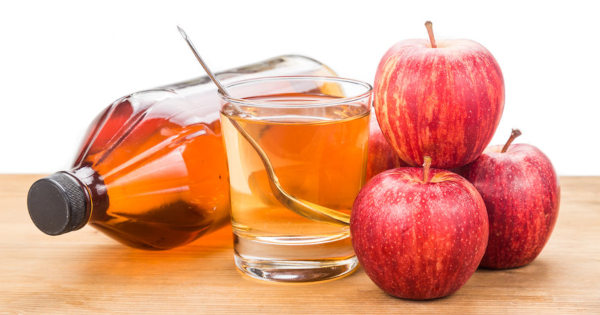 Learn five health benefits you can get from apple cider vinegar, used since time immemorial for a range of therapies, from wound healing to shedding excess pounds

There isn't a shortage of stories around the therapeutic effects of apple cider vinegar (ACV), from weight management to disease prevention and treatment. This popular home remedy has also been used for hundreds of years in the kitchen as a cooking ingredient.

Vinegar, after all, has had colorful uses recorded throughout history. Hippocrates used it medicinally for wound healing, while Hannibal of Carthage used it to dissolve boulders blocking the path of his army.[i] Sung Tse in the 10th century wasn't any different: he was said to promote hand washing with sulfur and vinegar to prevent infection during autopsy. Let's dig deeper into the science backing the benefits of apple cider vinegar.

1. Aids in Weight Loss and Maintenance

ACV may also be helpful in suppressing obesity-induced oxidative stress in animal models fed a diet high in unhealthy fats, mainly through facilitating antioxidant defense systems.[iv] It can also reduce the risk of obesity-related illnesses by lowering atherogenic risk.

Similar benefits have been seen in fruit vinegars like apple, pomegranate and prickly pear vinegars, helping prevent obesity and related cardiac complications due to their potent anti-inflammatory and anti-adiposity properties.[v]

Vinegar has demonstrated strong anti-pathogen action, including fighting bacteria.[vi] Using organic acids as supplements has, in fact, been deemed safe and effective in eliminating harmful bacteria in the intestines.

A study probed the antimicrobial ability of ACV against pathogens including E. coli, S. aureus and C. albicans.[vii] The results showed that the vinegar had multiple antibacterial potential, with the concentration of ACV required to inhibit microbial growth varying for each species. Follow-up research showed that ACV can also successfully eradicate methicillin-resistant bacteria.[viii]

Among healthy subjects who ate a bread meal, supplementing with vinegar lowered glucose and insulin responses, as well as increased fullness.[x] "The results indicate an interesting potential of fermented and pickled products containing acetic acid," the researchers wrote. In a separate small study, subjects with diabetes reported that consuming 2 tablespoons of ACV before bedtime decreased their fasting blood sugar by 4% the next morning.[xi]

A 32-year-old woman with chronic vaginal candida infection[xiii] who failed to respond to other therapies also recovered with the application of ACV, which can be considered for patients who are unresponsive to conventional medical therapies for this condition.

Animal studies suggest that ACV can optimize cholesterol and triglyceride levels, along with other common risk factors in heart disease.[xiv],[xv]

Vinegar may also have acute effects on some risk factors of atherosclerosis, with significant changes seen in LDL cholesterol and total cholesterol between low and high doses of vinegar.[xvi] Researchers pointed to "a probable protective value" for its use.

Cooking with vinegar or consuming it alone remain the best ways to incorporate ACV into your diet. You can also dilute vinegar with water and drink it as a beverage.

If you're wondering about the "right" amount of apple cider vinegar to take, a 2016 review stated that consuming a drink with 15 milliliters, or about 1 tablespoon, of vinegar every day was typically enough to see potential health benefits.[xvii] Experts also recommend getting organic, unfiltered apple cider vinegar that retains the "mother," or a cloudy, murky appearance, for optimal health benefits.