Flu Shots Mandated In Health Workers, But Do They Work? 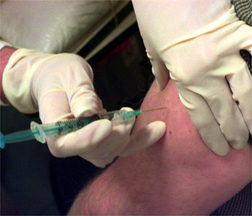 Last Wednesday the Colorado Board of Health approved a plan that would mandate 90 percent of all of their workers in the health care setting to receive mandatory flu shots, and would be phased in all facilities within the next three years.

While the decision sparked a major debate regarding civil rights at the state Capitol, little attention was paid to the question of whether the flu shots are actually an effective measure or not.

As it presently stands, there exists no sound medical science, but primarily economic and political motivation which generates the immense pressure behind mass participation in the annual ritual of flu vaccination.

It is a heavily guarded secret that within the medical establishment (especially within the corridors of the CDC) that the Cochrane Database Review, which is the gold standard within the evidence-based medical model for assessing the effectiveness of common medical interventions, does not lend unequivocal scientific support to the belief and / or propaganda that flu vaccines are safe and effective.

To the contrary, these authoritative reviews reveal that there is a conspicuously large amount of lacking conclusive evidence as to the effectiveness of influenza vaccines in children under two, healthy adults, the elderly, and healthcare workers who take care of the elderly.

Below is the Cochrane Database Review on influenza vaccination for heatlhcare workers who work with the elderly which concluded: "[T]here is no evidence that vaccinating HCWs [healthcare workers] prevents influenza in elderly residents in LTCFs [long-term care facilities]."

Clearly there is something wrong here. The policy decisions being forced upon healthcare workers are not based upon unequivocal scientific backing. If you wish to learn more about this current subject, you may do so by reading another blog by GreenMedInfo, titled "The Shocking Lack of Evidence Supporting Flu Vaccines"