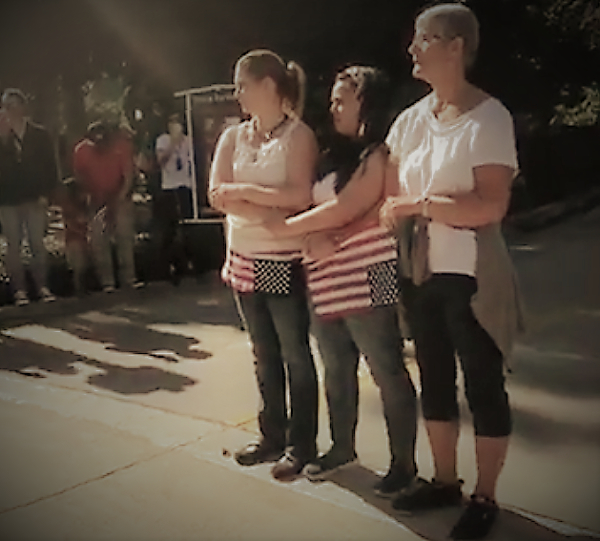 There they were, quietly standing with arms locked on a street next to the California state Capitol building on Monday, Sept. 9, 2019 and refusing to move: a grandmother and two young mothers. Carol, Lisa and Lauren were there with other parents to beg the California legislature to show mercy and allow enlightened doctors with a conscience to grant vaccine injured and vaccine vulnerable children a medical exemption to vaccination that cannot be taken away by government officials.1

Standing there with sadness and fear of the unknown in their eyes, they were surrounded by parents speaking words of comfort, while others shouted to the legislators inside to "oppose SB 276" and "you are not representing California for all." Then someone started singing "Amazing Grace," while mothers pushing strollers held their children in their arms and watched armed policemen from the California Highway Patrol form a circle around them.

As one patrolman informed them that if they did not move, they would be arrested and, if they resisted arrest, force would be used, the group of mostly young male patrolmen with a job to do looked uncomfortable. As they watched the three women stand there and refuse to move, perhaps they were thinking of their own mothers and grandmothers, their sisters, wives or daughters.

As I witnessed from Virginia on live video streaming the events unfolding in California 3,000 miles away, my heart was breaking for the pain and anxiety I could see in the faces of those women, who were taking an action that they never dreamed they would have to take. I knew that the love, which compels mothers to sacrifice everything to protect their children, outweighed their fear of what would happen to them if they did not move.

And as the patrolmen gently approached and handcuffed mothers, who were courageously protesting an abusive law that would make all doctors agents of the state, I knew that the vaccine safety and informed consent movement launched in America in 1982 by parents of DPT vaccine injured children had entered a new era.

In the tradition of women in history who fought for the right to vote, and who protested against child labor, and who marched during the civil rights and women’s liberation movements in the 20th century, three women in California calmly stood their ground and set the stage in the 21st century for nonviolent civil disobedience opposing forced vaccination laws in America.

It has been four years since California legislators eliminated the personal belief vaccine exemption for children to attend daycare and school. Now they are cruelly coming for families with children, who have already been vaccine damaged or are at greater risk for being harmed by vaccines. Taking New York2 3 and Maine this year, the forced vaccinators are revealing who they are and how far they are willing to go to deny the existence of vaccine damaged children or dismiss their lives as expendable, in order to achieve a 100 percent vaccination rate in every state.4

It is time to reflect upon why we, the people, have elected the kind of politicians who are voting to compel every American living in every state to use every vaccine that Big Pharma sells and the federal government orders doctors to administer - no questions asked and no exceptions.

A system that will not bend will break. When the government must resort to using fear and coercion to demand that parents choose between risking the lives of their children or giving them a school education, that system is already broken.

The three mothers in California, who were arrested for refusing to move out of a street near a building where legislators were passing a law that will harm their children5 were the first, but will not be the last, to stand their ground against forced vaccination laws in America.

The revolution to end medical tyranny and forced vaccination through civil disobedience has just begun. It is a peaceful revolution to restore respect for human rights and civil liberties, driven by the love that mothers and fathers have for their children, and it is long overdue.