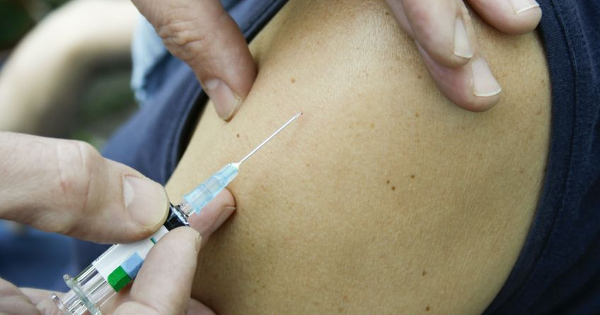 The media keeps hammering you with the message to get the flu shot. But maybe it’s time to start listening to the science and not to the media

There are four groups of people that science says should not be getting the flu shot.

Seniors should definitely not get the flu shot. The claim is constantly made that the flu vaccine protects seniors from serious complications from the flu that can lead to death.

But this claim fails to stand up to scientific scrutiny. When the data is subjected to proper analysis, the claimed protection against risk of death in the elderly drops to statistically insignificant levels (Am J Respir Care Med 2008;178:527-533). Another study concluded that increased vaccination is not correlated with decreased mortality among seniors (Arch Intern Med 2005;165:265-272).

Vaccinations don’t protect the elderly from serious complications from the flu. But, you should always send your child to school with the shot because flu vaccines do protect kids. Or do they?

Researchers set out to answer that question by looking at the efficacy of the flu vaccine in infants between 6 and 24 months. They found that the rate of influenza was not significantly different between infants who were vaccinated and infants who were not. They concluded that getting the flu vaccine actually did not reduce the rate of influenza in infants and children between 6-24 months (Pediatr Int 2004;46(2):122-5.

Even if the flu vaccine did protect your child, there is the question of whether you would want to protect your child. A recent study has suggested that getting the flu as a child can confer 75% protection against severe disease and 80% protection against death against that strain of flu and even against similar subtypes of flu virus you have never encountered before (Science 2016;354(6313):722-6). So, preventing your child from getting her first flu might not be the best idea.

Doctors recommend that pregnant women get inactivated flu vaccines even though there is little research on the safety of that recommendation during the first trimester. A recent study set out to see if the recommendation is responsible by studying the effect of getting a flu vaccine that included protection against swine flu (pH1N1) on spontaneous abortions. The results were unexpected and disturbing.

The study compared 485 women who had had spontaneous abortions with those who had not. It found that women who had spontaneous abortions were twice as likely to have had the flu shot 1-28 days before the abortion. For women who were getting the flu shot for the second year in a row, the risk of miscarriage went up by a significant 770%. For women not vaccinated the year before, the increase in risk was a nonsignificant 30% (Vaccine 2017;35(40):5314-22).

According to media reports, some experts have criticized the study for not properly controlling for greater risk factors in the miscarriage group. But, the authors say they did adjust for differences in the two groups. Others have expressed scepticism that an inactivated flu virus could trigger a severe enough reaction to cause an abortion. But, in science, the data trumps the theory, theory doesn’t defeat data. This data may not be the final answer, but it’s the most authoritative answer we have so far. So, pending further studies, the evidence suggests that getting the flu shot two seasons in a row significantly increases the risk of miscarriage.

There is also a troubling detail the media chose not to focus on. There is no reason for the recommendation that pregnant women get the flu vaccine, so there is no reason to chance the risk of miscarriage. It is currently recommended that women in the second or third trimester of pregnancy get the flu vaccine. But an analysis of hospital admissions found that women who got vaccinated during pregnancy had the same risk for influenza like illnesses as women who did not get vaccinated. There was also no difference in the risk for outpatient visits. As for the babies, the ones who were born to vaccinated mothers had the same risk for influenza and pneumonia as infants born to unvaccinated mothers. There was also no benefit when it came to outpatient visits. The study concluded that there is no demonstrable benefit to the flu vaccine for pregnant women (Am J Perinatol 2004;21(6):333-9).

Not only should seniors, children and pregnant women not get the flu shot, no one should. Though the media and the government keep telling you to get the flu shot, the highly respected Cochrane Collaboration found that “[e]vidence from systematic reviews shows that vaccines have little or no effect on the effects measured” (BMJ 2006;333:912). So, flu vaccines have not helped to prevent the flu.

A 2014 Cochrane Collaboration evaluation of 116 studies---all the research up to 2013--found that vaccinating adults did not change the number of people hospitalized nor the number of lost days of work (Cochrane Database of Syst Rev 2014, Issue 3. Art. No.: CD001269).

What’s worse is that the more often you get it, the worse it works. Canadian researchers identified the troubling result that getting the flu vaccine each year diminishes its effectiveness. When they followed 1,939 people, they found that the ones who got the flu vaccine in the 2014-2015 season, but not the year before, had a 53% vaccine effectiveness. However, the people who got it that season and also the season before had their effectiveness rate drop significantly to -32% (that's right: you're 32% more likely to get the flu with the second vaccine). If they got it that year and the two years before, the effectiveness dropped to -54%. The researchers concluded that there is a negative effect of repeated vaccination (Clin Infect Dis 2016;63(1):21-32).

Putting all the data together, it becomes clear that the media’s message has been louder than the science’s message. There is little or no evidence that flu vaccines benefit people young or old and plenty of evidence that vaccinations, and especially multiple vaccinations, may make it worse.