Views 6982
Posted on:
Tuesday, November 24th 2020 at 10:15 am
Written By:
GreenMedInfo Research Group
This article is copyrighted by GreenMedInfo LLC, 2020
Visit our Re-post guidelines 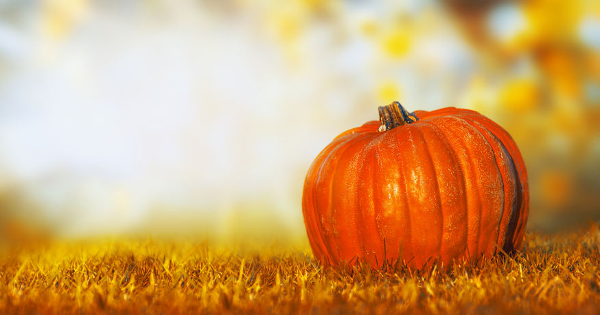 Pumpkin is popularly known as a Halloween decoration or a delicious Thanksgiving pie. Yet it's more than just a symbol of these annual festivities -- it offers a bounty of health benefits that have been celebrated for centuries.

Pumpkin, a type of winter squash, is part of the Cucurbitaceae family. It's native to North America and in the U.S. is sometimes referred to as Cucurbita pepo.[i] One of the fascinating benefits of pumpkin is its rich beta-carotene content. Beta-carotene is a carotenoid and antioxidant, a natural plant compound that gives pumpkin its bright orange color.[ii]

Scientists with the Agricultural Research Service (ARS) have developed an eco-friendly way to measure beta-carotene and other carotenoids found in pumpkin, showing that pumpkin contains more beta-carotene than many other foods found in your pantry.[iii] The human body can naturally convert beta-carotene into vitamin A, which promotes vision and skin health, among many perks.

In a 2019 clinical trial conducted by the National Eye Institute called the Age-Related Eye Disease Study (AREDS), high doses of beta-carotene along with vitamins C and E were linked to a significantly reduced risk of age-related macular degeneration.[iv] Here's a rundown of additional wondrous benefits of pumpkin for well-being.

A 2016 study suggested that a diet rich in beta-carotene can help suppress prostate cancer tumors.[v] A cross-sectional study done on a Japanese population in 2014 also showed that beta-carotene can slow the development of colon cancer. In a separate animal study, pumpkin seed was found to reduce the risk of colon cancer when consumed in dietary proportions.[vi]

Research published in 2010 concluded that a mixture of flax and pumpkin seeds supplemented in the diet of diabetic rats may assist in preventing diabetes and its complications.[viii]

In a more recent study, published in 2019, a combination of two plant extracts -- one of which was pumpkin polysaccharides -- pushed down blood sugar levels in animal models.[ix] While further human trials may be needed, the study demonstrated the plant compounds' potential to successfully manage Type 2 diabetes.

Pumpkin seed oil has been tested for wound healing due to its known properties that may aid treatment. Results from one study showed that cold-pressed, excellent-quality pumpkin oil, which has a high content of polyunsaturated fatty acids, tocopherols and sterols, promoted efficient wound healing in rats.[x]

According to a 2017 study involving 2,722 participants, consuming plenty of potassium is an important step to maintaining healthy blood pressure.[xi] Pumpkin is high in potassium, containing 394 milligrams per cup.[xii]

Other research revealed that pumpkin seed oil led to beneficial effects when administered along with an ACE-inhibitor and calcium-channel blocker in treating high blood pressure.[xiii] Consistent with other outcomes is the conclusion of a 2012 study showing that pumpkin seed oil exhibits antihypertensive and heart-protective effects.[xiv] The mechanism may involve the generation of nitric oxide.

For more health benefits of this often underappreciated squash, check out our pumpkin research database. 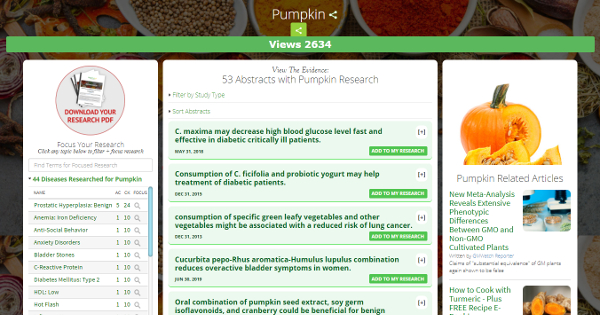