Views 4674
Posted on:
Thursday, August 7th 2014 at 10:30 am
Written By:
Sydney Ross Singer and Soma Grismaijer
This article is copyrighted by GreenMedInfo LLC, 2014
Visit our Re-post guidelines 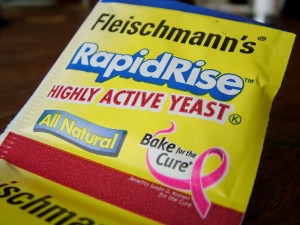 The current contentious GMO debate focuses on the health impacts of foods that have been genetically engineered on purpose for taste/texture, resistance to pests/disease, and other qualities.

It appears, however, that the food supply may already be contaminated by accident with genetically modified microorganisms designed for other purposes. And these "inadvertent" GMOs are associated with a host of metabolic diseases that directly tie to widespread health woes, including obesity, type 2 diabetes, and inflammatory gut and immune/autoimmune problems.

Genetically modified Baker's yeast, also known by its scientific name Saccharomyces cerevisiae, is used in numerous commercial applications (and this New York Times article suggests that many new developments in the flavor and fragrance arena are underway). Drug companies use GM Baker's yeast to make the peptide hormone insulin and other drugs.

For decades, human insulin for diabetic medication has been produced in genetically modified Baker's yeast by Novo Nordisk, a GMO pharmaceutical company which is a sister company to Novozymes, a producer of genetically engineered food enzymes.

Despite efforts to avoid environmental release of GMO yeast, Novo Nordisk has reported accidental spills over the years. Further, air emissions from the fermentation and recovery plants also contain GMOs, according to the company.

What happens if/when these GE yeast enter the environment? Novo Nordisk, which performs its own environmental disaster management and assessment, says its experience is that there is nothing to worry about:

"Very few accidental releases have actually occurred. We conduct investigations for GMOs in the environment around the factories on a regular basis, and we have never found any GMOs. Based on many years of experience it is our assessment that our genetically modified cells do not survive in nature. The cells are very weak and not fit to survive in the environment with scarce nutrients and competition from naturally occurring microorganisms." - Molecular microbiologist Niels Bagge, PhD employed by Novo Nordisk

Of course, since there is no third party verification, one cannot be certain if these GE yeast cells and their spores have not become established in the environment or the food chain.

It's because the genetics of Baker's yeast have been worked out by geneticists, and its genome is easy to manipulate, adding new genes with ease. Just ferment the yeast, and it synthesizes whatever you designed it to produce.

More specifically then, why are corporations permitted to use Baker's yeast for non-food commercial purposes when it is precisely the same yeast used in our food supply?

It's because no one said they couldn't.

What could happen if the GE Baker's yeast that produces insulin gets into the intestines of humans and starts producing insulin in the gut?

Could this be a cause of the worldwide epidemic of obesity and type 2 diabetes? How much genetically modified yeast is needed in the intestines to cause a problem? The research into these questions is not being done.

When Novo Nordisk is finished using its yeast to ferment human insulin, the yeast is heat inactivated and fed to pigs. It is not mentioned in their procedure whether they test for yeast spores, which are heat stable. The pigs are noted to get fat on the slurry, which would happen with hyperinsulinemia.

The fact that GE yeast can enter the intestines and produce physiological effects is being exploited by medical science. GE yeast is already under study as a way to deliver drugs and vaccines when taken orally. The yeast gets through the stomach and into the intestines where it can impact the body by releasing the products it was modified to produce. See, for example:

The current concern about inflammatory consequences of gluten-containing food consumption may actually be related to GE yeast contamination of these foods. Gluten exposure in sensitive individuals causes brain fatigue, neurological problems, joint aches, headaches, mood swings, and digestive problems, all of which can be explained by hypoglycemia (low blood sugar) resulting from having too much insulin. Hyperinsulinemia caused by GE yeast in gluten food products may be an alternative explanation for these symptoms.

In addition to Baker's yeast, some companies, such as Eli Lilly, produce these human hormones in the bacteria E. coli, which is a common bacterium of the intestinal tract. Eli Lilly has also admitted to numerous accidental releases of their GMOs. When these microorganisms enter the digestive tract, they are eliminated in the feces. They can easily get onto peoples' hands and be spread through contact, such as handshaking and food preparation. This could make diabetes potentially contagious conditions!

People who are experiencing health issues that could be attributed to excessive insulin or growth hormone might try eliminating yeast from their diets.

In the meantime, get ready for more GMO's. Since 2013, Novozymes has entered into a partnership with Monsanto, called the BioAg Alliance, to develop new GMO products. Novozymes will be responsible for production and supply of the microbial solutions to Monsanto, while Monsanto will lead field testing, registration and commercialization of all alliance products.

Novozymes has been in the farming business for some time. Yeast slurry from GE yeast production facilities at Novozymes are heat inactivated, treated with lime, and sold as the organic fertilizer, NovoGro.

"Started in the production plant in Kalundborg, Denmark, in the 1970s, Novozymes' NovoGro® organic fertilizer has successfully made its way to the US, China, and Brazil. Novozymes has worked closely together with farmers across the globe for more than 20 years supplying them with free biomass to fertilize their fields."

So, GMOs are transformed into organic fertilizer that is spread in the soil throughout the world.

This leads to concerns that antibiotic-resistant genes in the GE yeast, once applied to the soil, could spread to other microorganisms, causing antibiotic resistance, a problem in modern farming. Some studies suggest this possibility. (See Antibiotic resistance gene spread due to manure application on agricultural fields. Curr Opin Microbiol. 2011 Jun;14(3):236-43.)

However, Novozymes has conducted its own research into this possibility, and assures everyone that this is not happening. Using inactivated microbial biomass as fertilizer: the fate of antibiotic resistance genes in the environment. Res Microbiol. 2001 Nov;152(9):823-33.

But if it does happen, rest assured that there will be a new product developed to treat the problem.

Fearless Parent is the thinking parent's daily dose of non-conformist, evidence-based news about health, wellness, green living, and holistic parenting choices. Find them on Facebook, Twitter, Pinterest, and on the air.