Get a Winter Tan in Your Refrigerator

Views 5368
Posted on:
Sunday, January 13th 2013 at 5:00 am
Written By:
Margie King, Health Coach
This article is copyrighted by GreenMedInfo LLC, 2013
Visit our Re-post guidelines 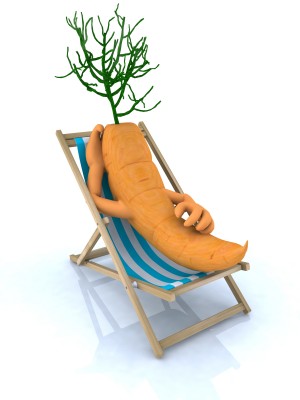 In the dead of winter do you head for a sun-drenched island to get a summer tan?  Don't bother.  Research suggests that you can actually avoid the sun altogether, as well as those tanning beds and tanning creams, and still get the warm healthy glow you want. It's not about what you put on your skin, it's about what you put in your mouth.

A study from The University of Nottingham suggests that eating vegetables can actually give you a healthy tan. In fact, the study results showed that eating a healthy diet rich in fruits and vegetables gives you an even healthier golden glow than the sun.

Published in the Journal Evolution and Human Behaviour, the research suggests that even in the winter months, you might get a tan just by munching on carrots and tomatoes.

The lead researcher, Dr. Ian Stephen, said that eating lots of fruits and vegetables is actually more effective than getting a suntan for improving skin color.

The study found that people who eat more servings of fruits and vegetables each day have a more golden skin color, thanks to antioxidant substances called carotenoids. Carotenoids help soak up damaging compounds produced by the stresses and strains of everyday living, especially when the body is combating disease. They are responsible for the red and orange coloring in fruits and vegetables such as orange carrots, orange and red peppers, cantaloupe, watermelon, and tomatoes, and are also important for the immune and reproductive systems.

The study was performed in the University's Perception Lab where researchers investigate face perception, for example, what makes one person appear more trustworthy and cooperative than another, or the relationship between health and attractiveness.

Dr. Stephen suggested that the study is important because evolution would favor individuals who choose to form alliances or mate with healthier individuals over unhealthy individuals.

Professor David Perrett, who heads the Perception Lab, believes this is a phenomenon that applies to many species citing the bright yellow beaks and feathers of many birds which signal how healthy a male bird is, thereby attracting females of the species.

Although limited to Caucasian faces, the paper also describes a study suggesting the effect may exist cross culturally, since similar preferences for skin yellowness were found in an African population.