Ginger: The Herb for Everything? 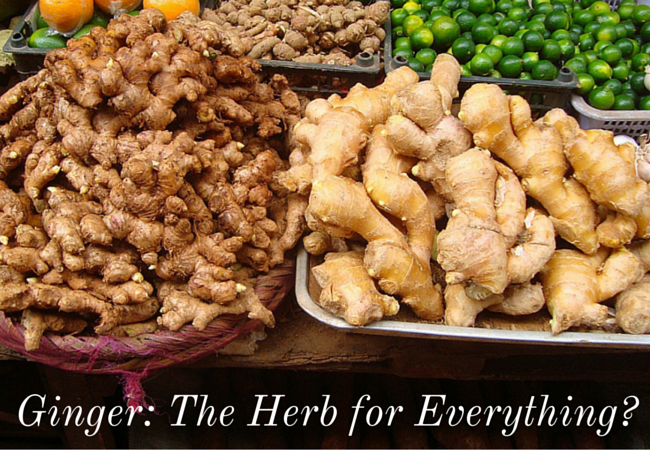 As we approach spring, marketing madness will of course strip us of our sensibility and convince us that now is the time for change. A new year; a new you. Weight loss fads and a detox in the box is just what the doctor ordered, isn't it? "Come one, come all; choose your potion, swallow your pill, take your natural products to prevent you from getting ill." Plus, as the bitter face chilling cold of the Great White North begins to etch at our bones, our deepening desire to stay warm, active, and support our immune system (and sanity) becomes ever apparent. We turn to our natural health care providers (Television and Google) in hopes of gaining calm within a storm of confusion. Is it the carrot diet, bread and water diet, the one meat only diet, or the no diet? Maybe it's the "see food" or "no food" diet. I just want to know what ever happened to my number one, simple, inexpensive, unbelievably reliable and scientifically validated herb that I, along with rest of the world pretty much used to use for everything.

With a drawer full of tablets, softgels, powders, liquids, and lozenges, one herb reproducibly demonstrates its supremacy as the reigning champ of at home medicine cabinet rivalry, both in safety and efficacy. As legend has it (and fact by the way), while ginger has been used widely for over a millennia to sooth a steady array of illnesses, it was merely the invention of refrigeration where it succumbed to its demise as the herb of choice for many. You see, ginger in all of its wonder, uniquely displays anti-microbial properties in all four categories; bacterial, viral, fungal, and parasitic. Have you ever noticed those pickled pieces carefully situated by your beautifully prepared spicy salmon sushi? Raw fish, cut up into tiny pieces, mixed with some sort of "fresh" mayo, sitting in a tupperware container; the culmination of an incredible story. Paul Schulick, in his book Ginger: Common Spice & Wonder Drug, illuminates Anisakis, a parasitic worm that can be acquired from eating raw fish. Ginger along with just two out of the hundreds of its active compounds have been shown in vitro to destroy this parasite by up to 90% in less than a day after administration. Despite this, with the invention of refrigeration as a sanitary alternative to keeping foods fresh and helping to prevent infection, ginger's perceived use, started to dwindle.

The next time you take a walk down the weight loss aisle in any health food store or even mass chain, you may notice one of the most common ingredients used, green tea. Not to take away from its magnificence but with a natural source of caffeine, many are searching for alternatives. Ginger has been shown not only to boost metabolism, but also decrease feelings of hunger, and doesn't contain this jittery substance. In fact, for all those sleepless nights, it may pleasantly surprise some to know that one of ginger's many healing compounds is melatonin; a sleep regulating hormone. With cardiovascular disease risk being one of the main objectives for losing weight and with inflammation being at the forefront of potential root causes, how much ginger would you purchase if you knew that it naturally contains over 70 known active anti-inflammatory compounds, all working in synergy as nature intends? Would it help to know that in terms of pain management, ginger positively affects the same enzyme pathways as major pharmaceutical drugs on the market today? Ginger is not only generally regarded as safe by the FDA but has tremendous side benefits.

Have you been overworked and has the past year taken a toll on both your mind and body? Perhaps lethargic is an understatement? Detoxes in boxes hail promises of glowing skin, revitalized energy, and unburdening key detoxification organs such as the liver and kidney to help people get on with their year. Years ago, as a naturopathic student studying in Toronto, I worked at a local health food store to help pay for books, morning chocolate croissants, and Vietnamese Pho from the cafeteria. Detox kits sold like hot cakes and although Milk Thistle, Turmeric, and Artichoke rightfully received much attention, ginger has taken a back seat, yet has an abundance of scientific and historical data, supporting its use as a liver protective food.

With the cost of a nice generous chunk of organic ginger costing under $5.00, it's by far one of the most inexpensive medicinal cabinet must have's. Even paying a premium for dual extracted, chemical free, super potent ginger in soft gels or even dare I say Non-GMO Project Verified, vegetarian capsules found in health food stores, $25.00 for a one month supply is hardly a wallet buster. Ginger is also arguably easier to swallow compared to say high end oil of oregano drops on the tongue and safer than chemically isolated, fractionated ginseng extracts that have been popping up everywhere. As a proud father of two, when my three year old son had a mild fever last night and was fussing away from damp, cool towels, although I had baby Tylenol on hand (to satisfy all you savvy readers of Green Med Info), I cut up a few pieces of organic ginger, simmered in a small pot of water for about 25 minutes, creating a beautiful, yellow and slightly spicy tea. I took two small tablespoons and mixed it with about double that of cold organic apple cider that Mom brought from a local farm. This isn't medical advice and isn't meant to influence parent's decisions on what to administer to a child, but my wife and I both tasted it and my 2 year old son concurs; "more" he asked, twice.

Read the extensive research on Ginger's health benefits on the GreenMedInfo.com database. 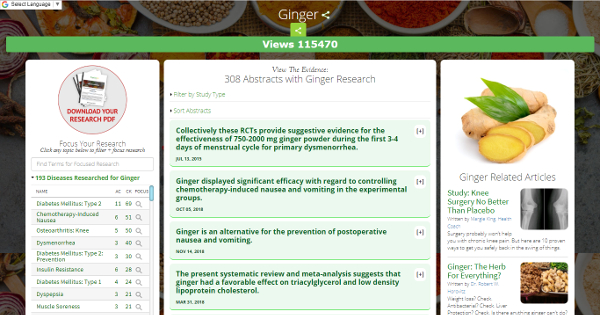 Dr. Robert W. Horovitz is a Dad | Speaker | Writer | Naturopathic Doctor | aspiring to help people promote lifelong wellness through speaking and writing opportunities.  You can contact Dr. Rob with any health related questions at robert@lifelongwell.ca.  More videos and articles can be found Dr. Rob TV at www.lifelongwell.ca and you can connect at www.facebook.com/DrNDRob.  Downloadable Platform Speaking Document available here (https://www.dropbox.com/s/c1zyl5553w3k078/Dr.%20Rob%20Platform%20.pdf?dl=0).