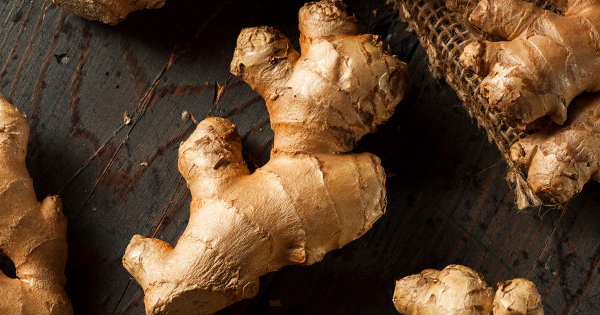 Are aching, swollen joints stifling your activity levels and making life a real pain? Read on to learn how ginger, an inexpensive, herbal wonder, can lead to less pain and inflammation and allow you to do more of the activities you love

Rheumatoid arthritis (RA) is an autoimmune disease affecting approximately 1.5 million people in the U.S.[i] RA disproportionately affects women, with nearly three times as many women afflicted as men and onset typically occurring between 30 and 60 years of age.[ii]

Autoimmune diseases occur when the body's immune response is overactive and assaults healthy cells and tissues. In the case of RA, the immune system erroneously attacks the joints.

The tissue that lines the inside of joints, called the synovium, thickens, and synovial fluid, which lubricates and reduces friction between bones and cartilage, is impaired, resulting in inflammation and swelling of affected joints and surrounding tissues.[iii]

RA can affect specific joints, such as those of the hands and feet, and can also be systemic, affecting entire body systems, such as the cardiovascular or respiratory systems.[iv] Left untreated, RA can permanently damage cartilage, which normally protects bones, eventually causing damage to the bones themselves. This can result in severe pain, loss of mobility and even permanent joint deformity.

Due to the severity of potential outcomes, most doctors recommend early and aggressive treatment to control RA.[v] Fortunately, natural treatments, including ginger, can help.

Due to the painful symptoms and severe risks presented by RA, most individuals who receive this diagnosis will opt for medication-based treatment. Physicians typically prescribe one or a combination of three types of drugs: non-steroidal anti-inflammatory drugs (NSAIDs), corticosteroids, and disease-modifying anti-rheumatic drugs (DMARDS).[vi]

The risks of taking NSAIDs are well-documented. Meta-analyses of these data show that the elderly are particularly vulnerable to such adverse effects.[vii] Increased risks of cardiovascular disease, gastrointestinal problems, which can be severe, and liver problems are among the devastating consequences that can occur from NSAID treatment.[viii]

Steroids, another common prescription for RA sufferers, provide targeted treatment since they can be shot directly into joints. However, their effectiveness diminishes over time and using steroids is not without risks. Side effects of steroids can include weight gain and puffiness, increased blood pressure, diabetes and heart disease.[ix]

Another common treatment, DMARDS, work by suppressing the body's immune system response. DMARDS are taken for long periods, potentially for the duration of the disease-state, or the rest of the patient's life. Relief does not come immediately, so these drugs are often prescribed in conjunction with an NSAID for pain relief.

DMARDS are risky drugs since suppression of the immune system increases susceptibility to opportunistic infections. They can also harm a developing fetus, so any patient who is or wishes to become pregnant should exercise extreme caution when taking DMARDS.[x]

Other potential side effects include, but are not limited to, gastrointestinal distress, liver damage, pancreas damage, high blood pressure, fertility problems and increased cancer risk.[xi]

Ginger: A Natural Antidote to Inflammation

A focus of our research at GreenMedInfo.com is the potent healing effects of plant-based medicine. Ginger (Zingiber officinale Roscoe) is a medicinal plant from the Zingiberaceae family. To date, more than 40 antioxidants have been isolated from ginger rhizome.[xii] Ginger is GRAS, generally recognized as safe,[xiii] and is known as a traditional treatment for relieving stiffness and pain in patients with osteoarthritis.[xiv]

While the healing effects of ginger may be well known, there is little clinical evidence supporting its use as a pharmaceutical drug alternative or adjunct in the treatment of RA. A multidisciplinary team of researchers based in Tehran, Iran, aimed to add to this dearth of clinical evidence by studying the effects of ginger root on immunity and inflammatory markers in patients with active cases of RA.

In this randomized, double-blind, placebo-controlled clinical trial,[xv] 70 active RA patients between 19 and 69 years of age were selected. Inclusion criteria were at least two years of disease duration, being under treatment with DMARDs (methotrexate, hydroxychloroquine and prednisolone <10 milligrams (mg) a day) and not receiving anti-inflammatory drugs (NSAIDs).

Participants were randomly allocated into two groups, ginger or control (placebo). The ginger group received two capsules daily, each containing 750 mg of powdered ginger, while the placebo group received similar, inert pills containing wheat powder that was stored in a ginger box to impart the distinctive ginger smell. The intervention was conducted for 12 weeks, with the ginger group receiving a total of 1500 mg of ginger each day.

The severity of illness and pain from RA are closely associated with inflammation and oxidative stress markers, factors that can be measured via a "disease activity score" and expression of certain genes (NF-κB, PPAR-γ, FoxP3, T-bet, GATA-3, and RORγt). The disease activity score (DAS28-ESR) was measured by a rheumatologist, with information related to swollen joints, tender joints, acute phase response and the patient's self-report of general health of 28 joints.

These markers and scores were measured using quantitative, real-time PCR (polymerase chain reaction) blood analysis, before and after this clinical intervention.

After the 12-week intervention, the group receiving ginger supplementation had significant decreases in their disease activity score and inflammatory markers (RORγt and T-bet genes expression). In addition, the ginger group saw significant increases in healthy immunity markers (FoxP3) as compared to placebo.

You can find more than 100 free and informative articles on the healing properties of ginger on GreenMedInfo.com. To read more scientific studies on ginger, consult GreenMedInfo.health's Research Database by becoming a member today. 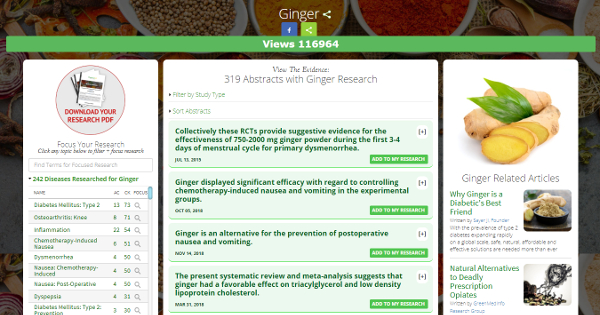 [i] Arthritis Foundation, What Is Rheumatoid Arthritis