A Gluten for Punishment: the Whole Grain Assault on Health

Views 32614
Posted on:
Wednesday, December 5th 2012 at 5:00 am
Written By:
Nathan Daley, MD, MPH
This article is copyrighted by GreenMedInfo LLC, 2012
Visit our Re-post guidelines 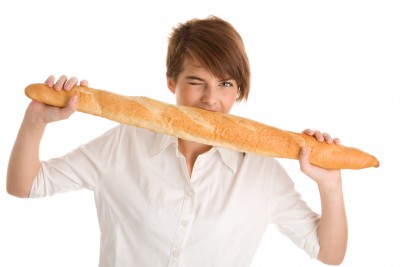 From Few to You

Among thoughtful and informed medical providers and public alike, there is an ongoing transition toward recognizing adverse health effects from grains as being common and normal rather than rare and abnormal.  Not all medical providers, of course, support this change in perspective and some are downright hostile toward it.  Likewise, a segment of the public seems to be irritated by the gluten free trend and consider it just a silly fad.

Yet, if medicine is to be science based, no credible medical provider can dismiss the possibility that a large proportion of the U.S. (and possibly world) population may be sensitive to certain molecules present in most grains.  Similarly, those that belittle the gluten free movement as a fad might, in fact, be an unknowing victim of grain sensitivity.

Celiac disease may have been described by the ancient physician Aretaeus of Cappadocia in the first century CE.  It was not until the 1940's, however, that the Dutch physician Willem Karel Dicke connected the disease to wheat as a result of the Dutch famine of 1944, in which wheat was scarce and those suffering from the disease seemed to dramatically improve.  Since that time, modern medicine has narrowly defined the disease as an autoimmune disease resulting from the ingestion of gliadin, a component of wheat gluten.

It is also now commonly acknowledged that many of these individuals also react to the gluten in barley, rye, and sometimes oats, as well.  This autoimmune reaction produces specific findings within the small bowel as well as specific antibodies in the blood, both of which define the diagnosis of Celiac disease.  Just in the last two decades, the estimated prevalence of this gluten-related autoimmune disease has gone from 1/6000 to 1/130 or even 1/100 people in the U.S..[1]  At 1% of the population, celiac disease is not exactly a rare condition.  However, celiac disease may be the tip of the iceberg when it comes to grain related disease and distress.

It turns out that not all Celiac sufferers have the typical symptoms, or any symptoms at all.  Traditionally, Celiac disease is thought to result in diarrhea, intestinal cramping and bloating, malabsorption (often resulting in anemia), and weight loss.  Yet, it has been more recently discovered that many people with positive antibody results and intestinal findings never complain of any symptoms.  The term "silent celiac disease" has been coined to describe such cases.

Yet, silent celiac disease is not truly silent.  Individuals with the silent version of the disease are just as likely (or even more likely) as those with symptomatic celiac disease to develop or have osteoporosis, lymphoma of the small bowel, and other autoimmune diseases like rheumatoid arthritis, systemic lupus erythematosus, multiple sclerosis, psoriasis, Hashimoto's thyroiditis (hypothyroidism), and perhaps even dementia[2],[3],[4],[5],[6],[7],[8].

How many people have "silent Celiac disease"?  The answer is not really known at this point in time.   A diagnosis of silent celiac disease still requires that the diagnostic criteria of celiac disease be met.  That is, auto-antibodies to the intestine or antibodies to gliadin must be present.  Considering that nearly all patients demonstrating these antibodies possess certain genes called HLA-DQ2 and HLA-DQ8, the upper estimate on the prevalence of celiac disease in general (including silent celiac disease) would equal the prevalence of these genes.  The prevalence of these genes in the U.S. population is around 30%!  Could 30% of the U.S. population have celiac disease?  Possibly, but not likely.  The disease may requires specific triggers or alterations of the immune system to develop (such as those that occur during pregnancy, with viral illnesses, with certain nutrient deficiencies, and perhaps with certain environmental exposures).  Celiac disease may develop at any age!

A 2007 article in the journal GUT suggests exactly this[21].  The authors assemble the evidence to suggest that a common (perhaps universal) inflammatory response to gluten leads to increased intestinal permeability (so called "leaky gut") which then allows a person with susceptible genes to develop the antibody and autoimmune response we call celiac disease.  In essence, they argue that everyone may experience inflammation upon the ingestion of gluten, and this inflammation may lead to a plethora of severe health problems, yet not everyone will develop celiac disease.

From Gluten to Grains

Before you consider the possibility, or the likelihood, that you have gluten sensitivity and alter your diet, there is still more to the story.  It turns out that gluten, the common term for several different proteins in wheat, rye, barley, and oats, may not be the only cause of the adverse health effects from these foods.  Grains contain molecules called lectins.  For instance, wheat contains wheat germ agglutinin (WGA) and it has been proposed that celiac disease and gluten sensitivity results from a gluten-lectin combination effect.  Indeed, many celiac patients also test positive for antibodies against WGA.[22]   Yet, lectins may cause health problems even from grains that lack gluten.  Grain, after all, is a broad term that refers to food seeds and includes grasses and legumes among other things.  Wheat, rye, barley, oats, sorghum, millet, maize, corn, soybean, rice, peanut, and most beans fall under the category of "grains."  While lectins are prevalent in nearly all plants and animals, grains contain very high concentrations of lectins.  Additionally, genetic modification of some grains has intentionally increased their lectin concentration in order to improve pest resistance.  Therefore, if lectins cause health problems, we would expect those problems to be most strongly associated with grain consumption.  However, studies have shown that wheat germ agglutinin (WGA) can have adverse effects on the intestinal cells even at extremely low  "nanomolar" concentrations[23].

Lectins are a general class of mostly indigestible proteins which bind to sugar molecules.  When ingested, lectins bind to the sugar molecules present on and in the cells which line the intestines.  A number of effects may be produced, including intestinal cell dysfunction and inflammation both of which subsequently lead to increased intestinal permeability (leaky gut).  Increased intestinal permeability, then, allows proteins (including lectins) that are not typically absorbed into the body to enter the intestinal veins and lymph vessels and circulate to vital organs.  This is part of the mechanism which is thought to contribute to various autoimmune conditions, but other outcomes are also possible.  A review article from 2004, summarizes several consequences of excessive lectin consumption like this:

Locally, they can affect the turnover and loss of gut epithelial cells, damage the luminal membranes of the epithelium, interfere with nutrient digestion and absorption, stimulate shifts in the bacterial flora and modulate the immune state of the digestive tract. Systemically, they can disrupt lipid, carbohydrate and protein metabolism, promote enlargement and/or atrophy of key internal organs [like the pancreas and thymus] [24], and alter the hormonal and immunological status. At high intakes, lectins can seriously threaten the growth and health of consuming animals.
[my insertion]

Finally, lectins that enter the blood may increase platelet activation and increase the likelihood of forming blood clots[26].  After all, the term agglutinin refers to the ability of these molecules to make blood clot!

So, by now there are two good reasons to eliminate or minimize one's intake of grains, namely gluten and lectins.  If this were not enough, I'd like to mention one more reason!  Grains contain two known toxins of the benzoxazinoid class, abbreviated DIMBOA and DIBOA (I'll spare you the chemical name).  These toxins induce mutations in DNA and RNA, which can cause cell death or, worse, induce a cancer cell[27].  DIMBOA and DIBOA offer a potent defense against pests and are produced in the highest quantities during the plants most vulnerable time, sprouting.

Unfortunately, sprouted grains, which contain the greatest amount of these toxins, have been promoted as a health food!!  Studies specifically investigating the link between grains and cancer are generally scare.  However, studies investigating the association between food groups and cancer have shown that bread and cereals intake is significantly associated with renal cell carcinoma and prostate cancer[28],[29].

It may seem surprising that, grains, the staple of the standard American diet, could be causing such harm to so many people.  Yet, grains were never cultivated for their health benefits.  The negative effect of grains on health can be seen in the archeological record starting around 8,000-10,000 years ago with the start of civilization and agriculture, when they were first consumed in large quantity.  Grains have always been cultivated for their agricultural reliability and hardiness.  Nations and their economies have evolved around this attribute of grains and today, the U.S. government spends over $20 billion dollars per year subsidizing the cultivation of some of the least healthy crops available.  Here is the breakdown of crop subsidies by percentage from 2004:

Five out of the top seven listed are grains and the others are certainly have their known health problems when consumed by humans (yes, even cotton in the form of cottonseed oil which is used in dressings and is pro-inflammatory).  There is no doubt that the subsidizing of these crops and, thus, the availability of cheap food products made from these crops, contributes to the significant disease burden in our country.

Going Against the Grain

Aside from reforming agricultural subsidies in the U.S., the most effective means to avoiding the adverse health effects of grains is to eliminate or reduce one's intake of grains.   This is no easy task!  I recommend a two staged approach.  Of course, these are general guidelines and not medical advice tailored to you as an individual.  Please check with your physician before continuing.

1. First strictly eliminate gluten.  If you can't bear the idea of a life without gluten but would commit to it in exchange for feeling better than ever, do a 30 day gluten free trial to see how you feel off gluten followed by a single day gluten challenge to see if more obvious symptoms return.  Just remember, not everyone who may experience adverse health effects from gluten will feel noticeably bad from eating gluten.  After you have adapted to life without gluten and have discovered the richness of a gluten free diet, move on to step 2.

2.  Eliminate all grains for 30 days.  This is to investigate any association between grains (and their lectins) and persisting symptoms of any kind and/or overall wellbeing.  This step is especially important for anyone with an autoimmune disease.  After this step, make the individually informed decision whether you want to allow any grains in your diet.  If you noticed not difference from fully eliminating grains, this may be a reasonable option.  If you wish to reintroduce grains to your diet, keep them to a minimum.  There is no dose which does not produce an effect on the intestinal lining.  Therefore, the goal is to minimize harm while retaining the freedom to eat some grains.  Regardless of whether you decide to eat some grains, I strongly recommend avoiding sprouted grains.